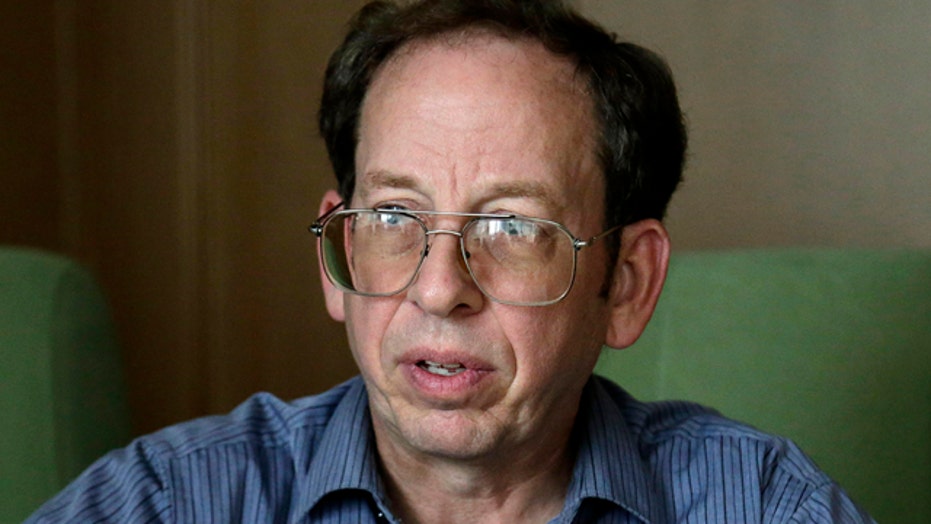 WASHINGTON – American detainee Jeffrey Fowle has been released from North Korea, nearly six months after he was taken into custody, the State Department said Tuesday. Two other Americans who have been tried and convicted of crimes in North Korea are still being held.

Fowle, 56, of Miamisburg, Ohio, had been awaiting trial on charges of leaving a Bible at a nightclub in the northern port city of Chongjin last May. He was flown out of North Korea on a U.S. government jet that was spotted Tuesday by Associated Press journalists at Pyongyang's international airport. The Swedish government helped negotiate Fowle's release.

White House spokesman Josh Earnest said it was a positive decision by North Korea to release Fowle. He urged Pyongyang to release the other Americans, Kenneth Bae and Matthew Miller.

"The U.S. will continue to work actively on them," he said.

Earnest said the Defense Department had provided transportation to Fowle on a schedule that the North had specified. He said Sweden had helped facilitate Fowle's release. The U.S. doesn't have formal diplomatic relations with North Korea.

State Department deputy spokeswoman Marie Harf said Fowle was on his way home to his family. "We welcome the DPRK's decision to release him," she said in a statement, using the abbreviation for the Democratic People's Republic of Korea.

Harf also thanked Sweden for "tireless efforts" by its embassy in Pyongyang. She provided no other details about the Swedish government's involvement.

Washington has repeatedly tried to send a high-level representative to North Korea to seek release of the three men. Pyongyang had refused as recently as last month, according to Robert King, the U.S. special envoy for North Korean human rights issues.

The three Americans entered North Korea separately. In interviews last month with the AP, all three said they believed the only solution to their situation was for a U.S. representative to come to North Korea to make a direct appeal.

Fowle arrived in North Korea on April 29 and was arrested in May for leaving a Bible at the nightclub. Christian evangelism is considered a crime in North Korea. Fowle is an equipment operator for the city of Moraine, Ohio, and has a wife and three children. His wife is from Russia and had made a written appeal on her husband's behalf to Russian President Vladimir Putin.

The other detained men are:

--Matthew Miller, 24, from Bakersfield, California. Miller was convicted Sept. 14 of entering North Korea illegally to commit espionage and sentenced to six years of hard labor. At his 90-minute trial, North Korea's Supreme Court said he tore up his tourist visa at Pyongyang's airport upon arrival on April 10 and admitted to having the "wild ambition" of experiencing prison life so that he could secretly investigate North Korea's human rights situation. In Late September, he spoke briefly to an AP journalist at a Pyongyang hotel where the North Korean government allowed him to call his family. He said he was digging in fields eight hours a day and being kept in isolation, but so far his health wasn't deteriorating.

-- Kenneth Bae, 46, of Lynwood, Washington. Bae is a Korean-American missionary who is serving a 15-year sentence for alleged and unspecified "hostile acts." He was arrested in November 2012 while leading a tour group in a special North Korean economic zone. Pyongyang accused Bae of smuggling in inflammatory literature and trying to establish a base for anti-government activities at a border city hotel. His sister believes Bae's Christian faith got him into trouble. In recent interviews with The AP, Bae said his trial lasted no more than 90 minutes and is suffering from chronic health problems, including back pain. His family also says his suffers from diabetes, an enlarged heart and liver problems. He has said he feels abandoned by the U.S. government.

In 2009, North Korea detained two American journalists, Laura Ling and Euna Lee, who were later freed after former U.S. President Bill Clinton visited Pyongyang. In 2011, former President Jimmy Carter came to North Korea to win the release of imprisoned American Aijalon Gomes, who had been sentenced to eight years of hard labor for crossing illegally into North Korea from China.

King, the American human rights envoy to North Korea, said last month that Washington would not give in to attempts to "extort" political gain from the detentions. Analysts say North Korea has previously used detained Americans as leverage in its standoff with the U.S. over its nuclear and missile programs, a charge that Pyongyang denies.

But Washington also has floated the possibility of a diplomatic opening in ties between the two countries should North Korea free the detainees.

Sydney Seiler, U.S. special envoy on the six-party talks with North Korea, did not hint at a U.S. mission to Pyongyang when he spoke at a Washington think tank on Tuesday.

"Obviously I'm not in a position to get into the full details of our sensitive diplomatic discussions with the DPRK but I think it's already out there that we have indeed been trying to engage the North Koreans on a range of issues -- the denuclearization issue, the three detained Americans," Seiler said at the Carnegie Endowment for International Peace.

"We have offered to engage with the North in a variety of ways, and they've rejected," he said.

He was speaking at a seminar marking the 20th anniversary of 1994 Agreed Framework with North Korea, which froze Pyongyang's nuclear weapons program in return for the provision of nuclear power reactors and the eventual normalization of ties with the United States. The deal subsequently unraveled.