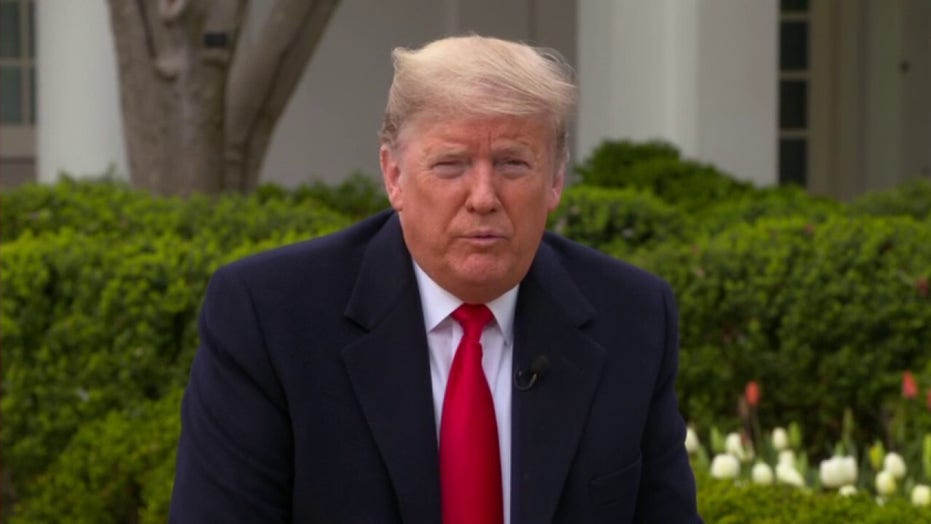 Trump: I'd love to have the economy open by Easter

President Trump tells Fox News that he wants the economy to reopen 'very soon' amid the COVID-19 pandemic.

Top Democrats are deriding President Trump's suggestion that he'd like to see the U.S. economy reopened soon, as the White House weighs how to refine nationwide social-distancing guidelines to put some workers back on the job amid the coronavirus pandemic.

The president, who tweeted Sunday that "WE CANNOT LET THE CURE BE WORSE THAN THE PROBLEM ITSELF," declared at a Fox News virtual town hall on Tuesday that he "would love to have the country opened up and just raring to go by Easter." The holiday this year lands on April 12.

"It's incredible that this has to be said: Letting thousands of people needlessly suffer and die is wrong," Hillary Clinton tweeted. "It's also not a recipe for rescuing the economy."

The failed 2008 and 2016 Democratic presidential candidate added: "Please do not take medical advice from a man who looked directly at a solar eclipse."

And, in an interview on ABC's "The View," Democratic presidential front-runner Joe Biden remarked: "We have to take care of the cure, that will make the problem worse no matter what." It was unclear what the former vice president meant, but he went on to take a clear shot at Trump for spreading "assertions not based on hard science."

Biden, for his part, has made numerous claims about the Trump administration's coronavirus response that have been assessed as false by several fact-checkers.

“I don’t agree with the notion that somehow it’s okay to let the, uh, let people die, and I’m not sure that would happen ... because, to make sure the economy's there for our kids," Biden has said. "The whole world is suffering from this."

Speaking to CNN's Jake Tapper on Tuesday afternoon, Biden called Trump a "piece of work" and asked, "What is going on with this man?"

(Separately, Tapper instructed Biden on how to properly cough into his elbow.)

Others were more blunt.

"This a--hole and his rich friends are too stupid to get that we can only get through this together," wrote former Obama speechwriter Jon Favreau. "Everyone is at risk from the virus. Everyone suffers when there aren’t enough hospital beds. Everyone struggles when millions are too sick to work."

Fellow Obama communications alum Tommy Vietor, meanwhile, deleted a tweet lamenting that he was reduced to drinking red wine in the shower during the economic shutdown.

Reluctance toward reopening the economy was not limited to Democrats, however. Rep. Liz Cheney, R-Wyo., who serves as House Republican Conference Chair, urged caution on Tuesday, although she didn't explicitly address Trump's comments.

"There will be no normally functioning economy if our hospitals are overwhelmed and thousands of Americans of all ages, including our doctors and nurses, lay dying because we have failed to do what’s necessary to stop the virus," Cheney wrote.

On Monday, the U.S. saw its biggest jump yet in the death toll due to the virus, with 609 American deaths attributed to COVID-19 since the outbreak began. Trump's comments come after dire warnings by officials in hard-hit areas, including New York. Gov. Andrew Cuomo warned Tuesday that his state's hospital capacity will soon hit a breaking point, even with the restrictions already in place.

“I gave it two weeks," Trump said during the virtual town hall from the Rose Garden. He argued that tens of thousands of Americans die from the seasonal flu or in automobile accidents and “we don't turn the country off.”

“We'll assess at that time and we'll give it some more time if we need a little more time, but we need to open this country up," he added. “We have to go back to work, much sooner than people thought.”

Dr. Anthony Fauci, the nation’s leading expert on infectious diseases and a member of the White House’s coronavirus task force, did not appear at the virtual town hall, but Trump denied there were any tensions between the two men.

Lawmakers have suggested that they'll look to Fauci for guidance on when the restrictions should be lifted.

A face mask is put on a statue during the coronavirus outbreak in downtown Madrid, Spain, Tuesday, March 24, 2020. More than 1.5 billion around the world have been told to stay in their homes. For most people, the new coronavirus causes only mild or moderate symptoms. For some it can cause a more serious illness. (AP Photo/Bernat Armangue)

Fauci told WMAL on Tuesday that Trump has always heeded his recommendations.

“The president has listened to what I have said and to what the other people on the task force have said, when I have made recommendations he has taken them. He's never countered or overridden me, the idea of just pitting one against the other is just not helpful,” Fauci said.

During a private conference call with roughly 30 conservative leaders on Tuesday, Pence reinforced Trump’s eagerness to lift coronavirus-related work and travel restrictions “in a matter of weeks, not months.”

Pence said there would be no formal decisions made until the current 15-day period of social distancing was complete when pressed on a specific timeline for lifting restrictions, according to a conference call participant who spoke on the condition of anonymity to share details of the private discussion.

Pence told the group that accommodations would need to be made for the highest-risk populations if and when restrictions begin to be lifted.

Fox News' Andrew O'Reilly and Allie Raffa contributed to this report, as well as The Associated Press.