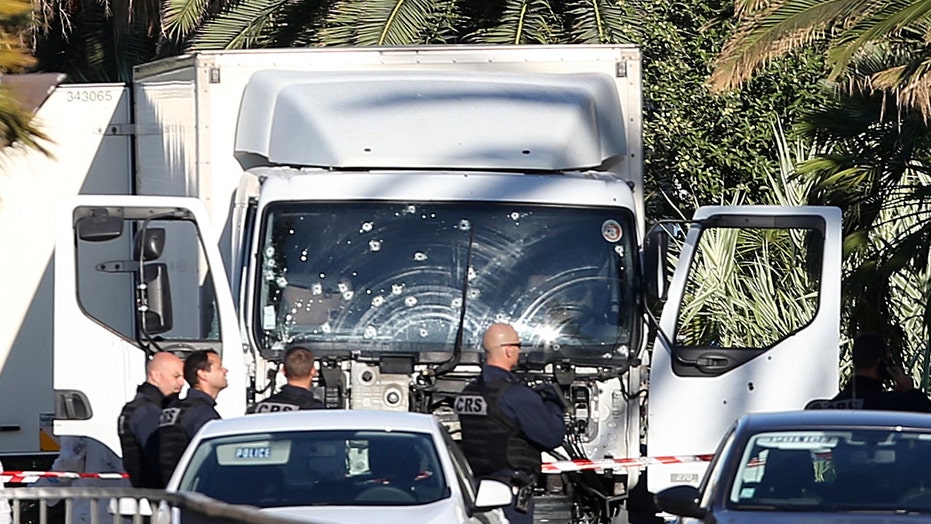 “Who made who? Who made you?” -- AC/DC’s title track for the horror film “Maximum Overdrive”

Supernatural forces are the touchstone of King’s canon. But here, King takes everyday, otherwise inanimate objects like trucks and truly plants a “ghost in the machine.” This mutates the trucks into faceless, nameless engines of evil which pillage and maim humanity.

French authorities now know that Mohamed Lahouaiej Bouhlel was behind the wheel of the 19-ton marauding truck that burrowed through a celebratory crowd on the streets of Nice, France.

But the premise behind Bouhlel’s attack is truly not that different from King’s in “Maximum Overdrive.” Both Bouhlel and King transmogrified a random truck into a terror tool.

But here’s what’s so sinister in Bouhlel’s attack: He was virtually unknown as a terror suspect. After a while, few will recall his face or name. But people will remember the horror of seeing a vengeful, white, Renault Midlum truck bearing down on bystanders.

The only thing missing on the truck in Nice was a visage of the Green Goblin.

From now on, crowds will think of the Renault when they attend the political conventions in Cleveland and Philadelphia. They’ll remember the white truck when they attend a ballgame, an outdoor festival or anywhere a vehicle like that could plow through a throng.

In today’s terror world, it doesn’t so much matter who’s driving the truck. It’s just that trucks -- like airplanes -- morphed into malignant objects.

Consider the spate of terrorism attacks in Istanbul, Brussels, Paris, Orlando, San Bernardino and Dallas. Sure, people remember some of the names and faces of the terrorists who perpetrated the attacks.

But what the U.S. and Europe now combat is a faceless movement. People inspired by ISIS or al Qaeda or things they read on the internet. Then they act, using commonly available objects. Certainly firearms. Making crude bombs. Now trucks. And it’s just not items. Everyday places become killings fields.

And as AC/DC sings in Maximum Overdrive, “Who made who?” Were terrorists driven by radical Muslims in Syria and Iraq? The phantasm of Osama bin Laden?

Or, was this a reaction to a “western way of life?” Was this a response to the U.S. launching a pre-emptive war in Iraq in 2003 and finding zero weapons of mass destruction? To what degree did American military intervention in Iraq contribute to chaos in Syria and parts of Iraq, precipitating the rise of ISIS.

“I do think ISIS is losing on the battlefield,” said House Minority Leader Nancy Pelosi, D-Calif., said Friday when asked about Nice. “Perhaps they have encouraged people to do these types of things. Pathetic souls. Lone wolves.

We don’t have all the facts on France right now. But they want to show some acts of cowardice where they attack noncombatant people in a vulnerable situation to make it look like they have some strength.”

“Who made who?” is certainly the right question to ponder.

Characterless. Faceless. Practically nameless. And now we all look askance at trucks.

On Thursday night, a cadre of House Democrats, led by Assistant House Minority Leader Jim Clyburn gathered on the West Front of the U.S. Capitol for a “speak out” about firearms.

These days, the surge of terrorism floods the news cycle at such a clip that even Democrats couldn’t focus their protest solely on firearms.

With the Capitol as a backdrop and facing a fiery sunset across the National Mall to the West, Clyburn immediately spoke of the rampage in Nice and called for a moment of silence.

The South Carolina Democrat talked about “beings who are inflicting their notions” and how “that it brings great sorrow to all of us.”

The program featured family members of those who were mowed down by gun violence.

“The sit-in was just the beginning,” asserted Rep. John Lewis, D-Ga., who engineered the 26-hour protest on the House floor in June. “We will not leave. We will not be satisfied.”

But again, even the Democrats’ calls for votes on firearm legislation don’t deal with individual people. Sure, some of the proposals focus specifically on prospective terrorists known to intelligence officials who place their names on the government’s “no-fly” list.

Democrats don’t think those listed on that docket should be eligible to acquire firearms. But again, it’s the objects -- like the trucks and airplanes -- which have been turned to evil.

This raises the question about logic behind these massacres. It’s natural to presume there is some rhyme or reason behind attacks, be they in Nice or Orlando.

It was ironic that the House Intelligence Committee convened a brief, closed session Friday to release 28 redacted pages of a 2002 congressional inquiry that studied 9/11.

For years, there was speculation that Congress shielded those pages because they may have implicated the government of Saudi Arabia or the Saudi royal family in the attacks.

“I think (publicizing the pages) is the best way to quell conspiracy theories,” said Rep. Mike Quigley, an Illinois Democrat and member of the Intelligence panel that voted for the release. “I think time helps with context.”

But what is the difference for suppressing the information then compared with today?

“It’s hard to look back in a prism of time,” Himes said.

The 28-page tranche still contained 156 distinct redactions. The section in question focused on individual actors, ranging from someone who was believed to be Osama bin Laden’s half-brother to a neighbor who lived near some of the hijackers in San Diego.

An unknown witness told lawmakers probing the 9/11 attacks that “both the FBI and CIA recognized the possibility that individuals connected to the Saudi government may be providing support to terrorists.”

That supposition alone serves as a stark contrast to the concept of “war” waged on September 10, 2001, and how we think of conflicts today.

Immediately after 9/11, it may have been natural for intelligence services to presume that various state actors were responsible for the attacks.

But now, the U.S. and Europe is embroiled in asymmetric warfare. They wage battle with figures completely untethered to nation-states or hostile governments.

As Pelosi argued, lone-wolves are engaging civilians. And their weapons of destruction are now iconic. The latest are trucks.

At one point in Maximum Overdrive, one character remarks “Maybe tomorrow it will be our world again.”

The trucks will just be trucks again. Not engines of evil.

After Nice, it’s hard to imagine how.