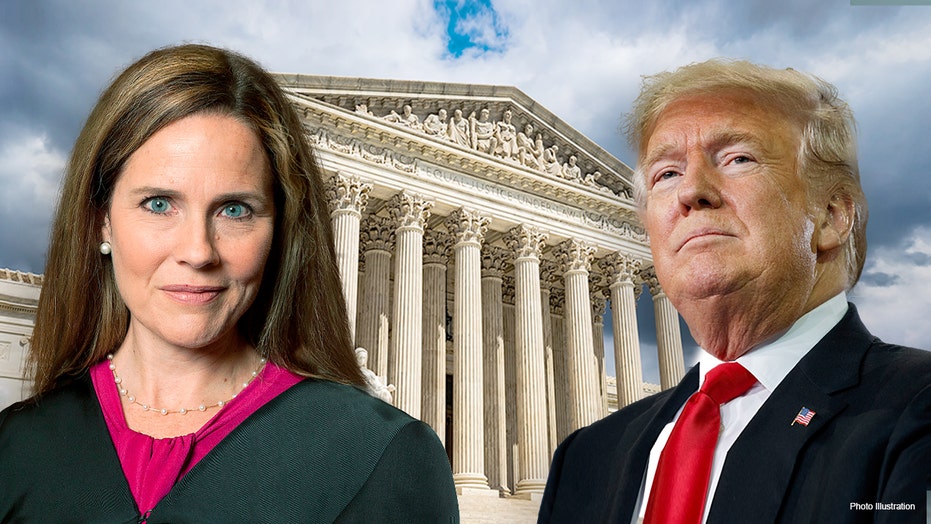 Democrats took to social media to slam President Trump's choice of Judge Amy Coney Barrett for the Supreme Court after the president's announcement Saturday night -- with one senator claiming the nomination is the result of an "illegitimate process."

Many of their posts related to the Obama-era Affordable Care Act, claiming Barrett, a judge on the 7th Circuit Court of Appeals, would threaten ObamaCare.

Democratic presidential nominee Joe Biden responded by saying "vote like your health care is on the ballot — because it is."

"Supreme Court decisions affect our everyday lives, and the Constitution was designed to give voters a voice on who makes those decisions," Biden said. "The Senate shouldn't act until after the American people select their next president and the next Congress. Americans deserve to be heard."

His running mate, 2020 vice presidential nominee Kamala Harris, claimed in a tweet that the president's choice made it clear Republicans are intent on destroying the Affordable Care Act and overturning Roe v. Wade, the 1973 landmark Supreme Court decision on abortion.

"This selection would move the court further right for a generation & harm millions of Americans," Harris said. "I strongly oppose Judge Barrett’s nomination."

"This is about health care, reproductive rights, full equality for LGBTQ people, our planet, and so much more," wrote Buttigieg. "The stakes of this struggle could not be higher."

Warren said that who Barrett is "in many ways doesn’t matter."

"We know exactly what that person is being picked to do: complete a decades-long assault on our judiciary by billionaires and giant corporations to tilt the courts for the rich and powerful," she asserted.

"Amy Coney Barrett will work to gut Roe v. Wade and the ACA, taking away health care coverage from millions of Americans—including those with pre-existing conditions," she tweeted minutes later. "And make no mistake: Trump is counting on her to swing the Supreme Court in his favor when he loses this election."

New York Democratic Sen. Kristen Gillibrand tweeted that Barrett's nomination is the "product of a corrupt, illegitimate process that undermines the will of the American people."

"Alongside her dangerous, ultra-conservative record, she’s not fit to serve on the Supreme Court," she added.

In line with the Democrats' broader argument against Republicans' supposed hypocrisy, California's Democratic Gov. Gavin Newsom tweeted a video of Barrett from a 2016 CBS News interview regarding the filling of Justice Antonin Scalia's vacant seat.

"Here is Judge Amy Coney Barrett explaining why it’s wrong to fill a SCOTUS vacancy during a presidential election year," Newsom wrote in a caption.

Senate Minority Leader Chuck Schumer, D-N.Y., tweeted that a vote for Barrett is a vote to "eliminate health care for millions in the middle of a pandemic" and Democratic House Speaker Nancy Pelosi, D-Calif., blasted the president specifically -- not even naming Barrett.

"For four years, President Trump has tried to crush the Affordable Care Act," she wrote. "With his Supreme Court nominee, he is threatening the destruction of every benefit and protection of the ACA, including life-saving protections for 135 million Americans with pre-existing conditions."

California Democratic Rep. Adam Schiff tweeted that Republicans were "rushing" Barrett into a lifetime appointment so she can strike down important health care and because, "Republicans also fear they’re losing the election and want her to deliver the election for Trump."

"No confirmation before [the] inauguration," he urged.

Washington State Democratic Gov. Jay Inslee wrote that 718,000 Washingtonians stand to lose their health care coverage under Barrett, and others like Pennsylvania Democratic Sen. Bob Casey and Texas Senate candidate MJ Hegar slammed GOP members for rushing the confirmation through in the midst of the COVID-19 pandemic.

"If John Cornyn and his boss Mitch McConnell can rush to confirm Amy Coney Barrett, the Senate could've been a functional legislative body passing desperately needed COVID-19 relief and more," wrote Hegar. "Instead they’re pushing their partisan agenda to strip us of our health care."

Barrett, 48, is a former law professor at the University of Notre Dame and a mother of seven.

A source familiar with the process told Fox News that Oct. 12 is the target date for the beginning of confirmation hearings.