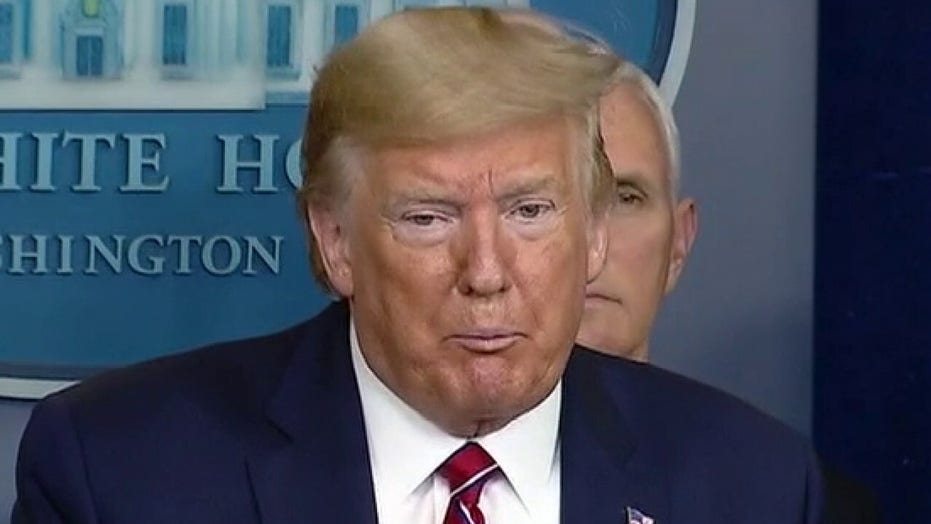 As the coronavirus threat has grown more alarming in many parts of the U.S. and a third coronavirus response bill stalled in the Senate Sunday night, many Democratic politicians have ratcheted up their criticism of President Trump as he seeks to gain control of the crisis.

The barbs have come from the campaign trail, from governors' mansions and mayors' offices — and few have teed up warnings as dire as New York City Mayor Bill de Blasio, who on Sunday said "people will die" if Trump doesn't give the city further help.

"The president of the United States is from New York City and he will not lift a finger to help his hometown,” de Blasio said on NBC's "Meet the Press" Sunday. "I don’t get it."

New York City Mayor Bill de Blasio, with Dr. Oxiris Barbot, commissioner of the city's Department of Health and Mental Hygiene, reports on the preparedness for the potential spread of the coronavirus on Feb. 26, 2020. (AP Photo/Mark Lennihan, File)

DE BLASIO: IF TRUMP DOES NOT ACT ON CORONAVIRUS OUTBREAK, 'PEOPLE WILL DIE'

He continued: "If the president doesn’t act, people will die who could have lived otherwise."

For their part, Democrats are facing heavy criticism from GOP colleagues after blocking the aid bill overnight. Sen. Susan Collins, R-Maine, said the move by Democrats is "irresponsible and unwise."

"They are playing with fire," she said, according to The New York Times.

Mayor de Blasio asked Trump to bring in the military to fight the coronavirus in hotspots like New York City, which is where about one-third of the coronavirus cases in the U.S. currently are. "I guarantee you they're ready to serve, but the president has to give the order," the mayor said, blaming Trump for keeping the military's "logistical" resource on the sidelines.

"People from every demographic, every race, ethnicity, gender or background have been infected. Suggesting otherwise or engaging in racist speech or acts is one of the most profoundly un-American things that I can think of," Pritzker said of Trump. "The current crisis should drive home to all of us just how connected we all are. We can choose how we want to come out on the other side of this — let's choose to be one Illinois."

Trump has repeatedly stood by his "Chinese virus" terminology and others in his administration have also called the coronavirus variations of the "Wuhan virus" and the "Chinese coronavirus" in an apparent effort to counteract a Chinese propaganda campaign trying to shift responsibility for the pandemic to the United States. The coronavirus originated in Wuhan, China, and its spread was exacerbated by early mishandling and lack of transparency by the Chinese government.

Pritzker also targeted Trump online after the president picked him out by name as a member of "a very small group of certain other Governors" who "shouldn’t be blaming the Federal Government for their own shortcomings."

Pritzker shot back: "You wasted precious months when you could've taken action to protect Americans & Illinoisans. You should be leading a national response instead of throwing tantrums from the back seat. Where were the tests when we needed them? Where's the PPE? Get off Twitter & do your job."

Michigan Gov. Gretchen Whitmer, in an interview with "Fox News Sunday," also panned Trump's coronavirus response when asked about a tweet from earlier last week when Trump called her the "Failing Michigan Governor" and said she needed to be "more proactive."

"He’s responding to my criticism that they didn’t do the preparation that they needed to do on the front end," she said. "That’s why we have a shortage of tests. That’s why we have people who don’t take this seriously — because for a long time we were told that it wasn’t to be taken seriously. This is what we're up against."

And from the campaign trail, Democratic frontrunner Joe Biden, who is likely to face Trump in the November general election, launched repeated attacks not only on the administration's immediate handling of the coronavirus threat but also on the bill being supported by Trump and Senate Republicans as a third-phase coronavirus response.

"Mr. President, stop lying and start acting," Biden said in a statement, specifically mentioning Trump's reluctance to use the Defense Production Act to mobilize the private sector to build the equipment hospitals and doctors will need to battle the coronavirus. "Use the full extent of your authorities, now, to ensure that we are producing all essential goods and delivering them where they need to go."

Trump invoked the Defense Production Act last week but initially said he didn't plan to use it, citing voluntary work by the private sector to meet medical professionals' needs. He later, during a phone conversation with Senate Minority Leader Chuck Schumer, gave the order to his staff to begin using his powers under the act, though it is not clear what exactly he is ordering produced to fight the pandemic.

Biden then launched a broadside against Trump and the Senate GOP as their bill failed to clear a vote on a procedural hurdle Sunday night, after being blocked by Democrats.

"Here’s what’s happening. The White House and the Senate Republicans have proposed a $500 billion slush fund for corporations, with almost no conditions. Donald Trump’s Treasury Secretary would decide which big businesses get how much, and he can give out billions with virtually no strings attached," Biden said.

"The Trump Administration could even allow companies to use taxpayers’ money for stock buybacks and executive pay packages, and they don’t have to tell Americans where the money is going for months," he continued.

Biden's rhetoric echoes that from Senate Democrats and Schumer on the problems in the Senate coronavirus bill, despite Senate Majority Leader Mitch McConnell's pleas for lawmakers to hold their noses and vote for it for the sake of Americans' confidence in their lawmakers and for the stock market — futures fell significantly Sunday night after the procedural vote on the bill failed.

Criticism from Trump on the coronavirus has also come from the likes of Colorado Gov. Jared Polis, a Democrat, who said on MSNBC Sunday "I'm not a socialist like Donald Trump," in response to Republicans' efforts to prop up companies hit hard by the coronavirus-induced economic slowdown, potentially taking an equity stake in companies it gives money to.

"I think that rather than these corporate bailouts we should be talking about helping people," Polis said. "That means workers, that means small business owners, that means everybody."

Treasury Secretary Steven Mnuchin has repeatedly said what the administration wants are not bailouts, citing the apparently temporary nature of the current economic downturn and saying that the economy and these companies just need some temporary liquidity until the spread of the coronavirus is medically under control.

Sen. Kamala Harris, D-Calif., also took shots at Trump Sunday, both for the GOP plan to spend hundreds of billions of dollars helping corporations with liquidity and for moving forward with its effort to strike down the Affordable Care Act -- also known as Obamacare -- in the courts.

"Outrageous," Harris said in a tweet. "We are in the middle of a global pandemic and Donald Trump wants to strip health care from millions of Americans. This is why we fight."

All of this criticism comes after a couple of weeks of relative unity as politicians worked to fight the coronavirus. Trump last week even earned praise from New York Governor Andrew Cuomo and Rep. Ilhan Omar, D-Minn., over his coronavirus response. But it appears the honeymoon is over.

With the Senate likely to vote again on its coronavirus relief package again Monday and more time on national television during the daily coronavirus task force briefing, Trump will be faced with a tough political road ahead as he and Republicans quibble with Democrats over the best way to fight the coronavirus pandemic.