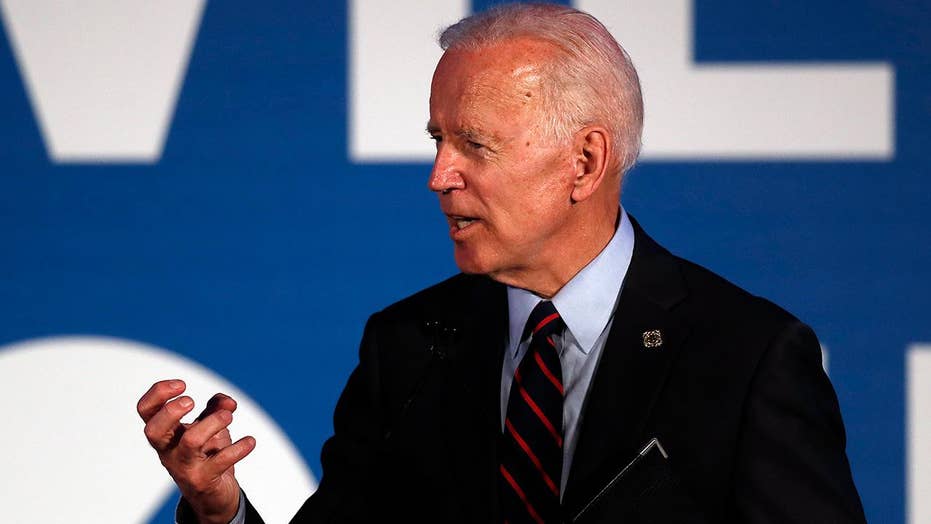 A group of Democrats is calling on the party to moderate the platform's support for abortion  as leadership pressed taxpayer funding for the procedure before the 2020 elections.

This week, Rep. Ayanna Pressley, D-Mass., moved to strike the decades-old provision and Democrats for Life (DFL) released a letter supporting it.

"A diverse coalition of 115 religious leaders, clergy, and theologians today sent a letter calling on the Democratic Party to moderate its platform’s position on abortion," read Friday's letter from DFL. "Specifically, the religious leaders urge the Party Platform Committee to remove extreme abortion policies, which will make it more inclusive towards pro-life voters and moderate voters of faith."

The group notes that a Marist poll showed six in ten Americans opposing taxpayer-funded abortions. Passed in 1976, the historically bipartisan amendment has blocked most Medicaid funding for abortions -- with exceptions for rape, incest and the life of the mother.

A draft platform obtained by Politico showed the party proposing Hyde's repeal and excluding language about gestational age restrictions. "Democrats believe every woman should be able to access high quality reproductive health care services, including safe and legal abortion. We oppose and will fight to overturn federal and state laws that create barriers to women’s reproductive health and rights, including by repealing the Hyde Amendment and protecting and codifying Roe v. Wade," the draft platform read.

DFL's Kristen Day has denounced that framework as wildly out of step with most Democrats, nevermind most Americans. In January, Day made headlines after she confronted former presidential candidate and Indiana Mayor Pete Buttigieg over his position on the party's platform.

"In 1996 and several years after that there was language in the Democratic platform that said 'we understand that people have very differing views on this issue but we are a big tent party that includes everybody and therefore we welcome you -- people like me -- into the party so we can work on issues that we agree on,'" she said. Buttigieg, who seemed to equivocate on infants who survive abortions, told Day that he supported his party's position.

But in recent years, the abortion debate has become even more polarized as a series of states faced tense battles over a myriad of regulations on the procedure. Anticipating a conservative Supreme Court decision, several states and presidential candidates proposed legislation that would codify the Court's landmark ruling in Roe v. Wade.

In the 2020 election cycle, Democratic activists have framed the issue as one of racial and health equity. After nearly every other Democratic candidate opposed Hyde, former Vice President Joe Biden reversed his decades-long support for the measure.

Pressley advanced repeal on Thursday as a way to take on different forms of oppression.

"We are in a moment of reckoning and transformation as a nation," Pressley said in a Medium post. "Without a doubt, now is the moment to dismantle systems of oppression and take a stand against racist and discriminatory policies. Empty gestures are not enough."

She reiterated the pro-choice argument that Hyde disproportionately burdens people of color, who may be less likely to afford abortions compared to their White counterparts. Along with Rep. Alexandria Ocasio-Cortez, D-N.Y., and others, Pressley filed an amendment to remove Hyde provisions from a federal spending bill. It's unlikely to pass the Republican-controlled Senate or make it past President Trump, who has implemented an aggressive anti-abortion agenda at the executive level.

"Black and brown people cannot afford to wait another budget cycle for their humanity and dignity to be recognized," she said. "In this moment of profound national reckoning, Congress must right the wrongs of the past and make reproductive autonomy a guaranteed right for everyone." To be clear, Hyde does not automatically prohibit access to abortion but rather blocks federal funds for obtaining one.

The heightened focus on race has also prompted Planned Parenthood of New York to distance itself from its the organization's founder, Margaret Sanger, who worked to reduce Black population growth. Black anti-abortion leaders recently told Fox News that the widespread use of the procedure itself was racist and continued Sanger's legacy.

According to Planned Parenthood, the Hyde Amendment has a disproportionate impact on women of color -- 30 percent of Black women and 24 percent of Hispanic women are enrolled in Medicaid, along with 14 percent of White women.

Terrisa Bukovinac, an atheist who sits on DFL's board, told Fox News that Pressley's position was "severely problematic."

"Rep. Pressley’s attempt to paint a truly life-saving amendment, one designed specifically to protect black, brown, and underprivileged people from being coerced by the state into choosing abortion, is severely problematic," said Bukovinac, who also leads Secular Pro-Life and Pro-Life San Francisco.

"The Hyde amendment has saved more than 2 million lives that are disproportionately black and brown. Suggesting that these people are better off dead is itself an expression of the white supremacist ideals that gave birth to the abortion industry in the first place! The American people deserve better than state sanctioned violence against their own offspring and the majority of Democrats agree. Taking a position against Hyde is a losing one."

Earlier this week, the Charlotte Lozier Institute released an addendum to a 2016 study estimating that Hyde restrictions had saved more around 2.13 million unborn children since its passage in 1976. That translated into about 60,000 lives per year.