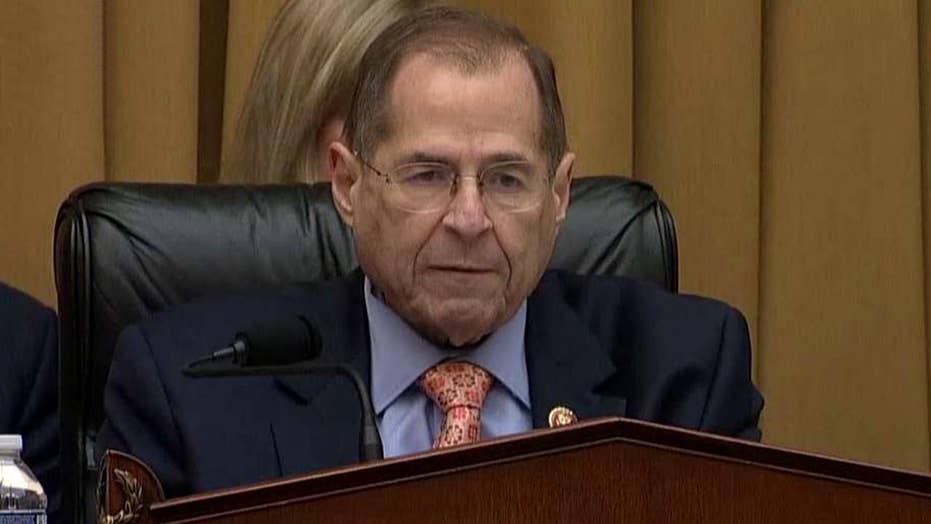 Nadler: We will not allow President Trump to prevent us from hearing from Don McGahn

The top Democrat on the House Judiciary Committee vowed Tuesday to go to court if necessary to seek former White House Counsel Don McGahn's testimony, after he defied a subpoena and skipped a committee hearing at President Trump's direction.

The move infuriated Democrats and touched off what could be another high-profile battle over holding a Trump official in contempt of Congress.

“Let me be clear, this committee will hear Mr. McGahn's testimony, even if we have to go to court to secure it,” House Judiciary Committee Chairman Jerry Nadler, D-N.Y, said at the beginning of the hearing which McGahn did not attend.

Accusing Trump of witness intimidation, Nadler added, “When this committee issues a subpoena, even to a senior presidential adviser, the witness must show up. Our subpoenas are not optional.”

While he did not specifically mention contempt, Nadler told CNN on Monday night that lawmakers would pursue that route.

A day earlier, the president directed McGahn to not appear for the committee hearing, citing a Justice Department opinion that he cannot be compelled to testify about his official duties.

“In short, the president took it upon himself to intimidate a witness who has a legal obligation to be here today,” Nadler said. “This conduct is not remotely acceptable.”

But Georgia Rep. Doug Collins, the ranking member on the committee, responded to Nadler’s remarks by accusing Democrats of political theatrics, saying they are “trying desperately to make something out of nothing.”

"I cannot emphasize this enough — the chairman’s track record demonstrates he does not actually want information,” Collins said. “He wants the fight, but not the truth.”

In a statement released Monday afternoon, White House Press Secretary Sarah Sanders blasted Democrats for continuing to pursue Trump investigations, saying they want a "wasteful and unnecessary do-over" in the wake of Special Counsel Robert Mueller's probe -- and describing the subpoena for McGahn as part of that.

The related DOJ memo said McGahn, like other senior advisers to a president, has "immunity" from being compelled to testify about his official duties.

"This immunity applies to the former White House Counsel. Accordingly, Mr. McGahn is not legally required to appear and testify about matters related to his official duties as Counsel to the President," the memo said.

The committee announced the hearing last week, but it was initially unclear whether McGahn would appear due to the ongoing battle between congressional Democrats and the White House over his testimony.

The committee, led by Nadler, subpoenaed McGahn on April 22, days after the release of Mueller’s report, which featured McGahn prominently in its section related to the obstruction of justice inquiry. This included a claim that McGahn disobeyed Trump’s call to have him seek Mueller’s removal.

The report also revealed that when the media reported on the president’s request, the president directed White House officials “to tell McGahn to dispute the story and create a record stating he had not been ordered to have the special counsel removed.” He did not.

The House committee's subpoena, coming amid a fight over access to the unredacted Mueller report, called for McGahn to appear before the panel to testify and provide documents related to the Mueller investigation.

The battle over McGahn's testimony is just one front in the clash between the White House and congressional Democrats.

Earlier this month, the committee voted to hold Barr in contempt for defying a subpoena for Mueller's full and unredacted report, as well as underlying evidence and documents used in the investigation.

Trump, prior to the vote, asserted executive privilege over the materials in a bid to protect them from being turned over to the committee. The full House has yet to take a final vote on whether to hold Barr in contempt of Congress.