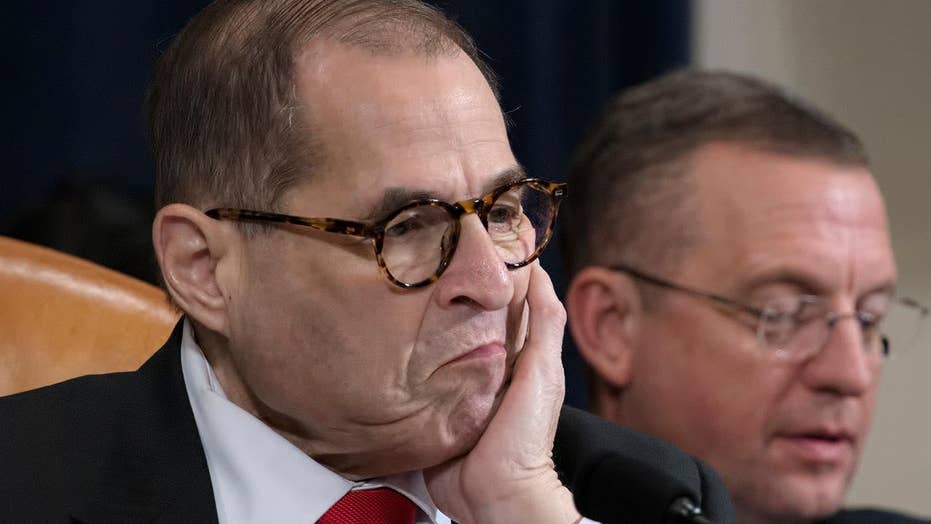 Democrats poised to unveil two articles of impeachment against Trump

House Democrats are preparing to announce at least two articles of impeachment against President Trump on Tuesday, Fox News has learned.

The articles of impeachment will focus on obstruction of Congress and abuse of power, but all details aren’t settled yet, Fox News is told. A markup session by the Judiciary Committee to prepare the articles would come either Wednesday or Thursday.

Notably absent from the planned charges was a "bribery" count. Democrats had repeatedly accused the president of essentially bribing Ukraine to investigate Joe Biden, and even floated the idea of drafting an article of impeachment to that effect. But, it quickly emerged that the Democratic Congressional Campaign Committee had conducted focus groups to determine that Democrats should use the term "bribery" purely for political benefit, even as legal experts disputed whether Trump had bribed anyone.

House Speaker Nancy Pelosi, D-Calif., convened the House chairmen leading the impeachment inquiry in her office on Monday after a daylong Judiciary Committee hearing that laid out the case against Trump as Democrats warned of the supposed risk his actions toward Ukraine have posed to U.S. elections and national security.

ALL EYES NOW ON DURHAM PROBE, AS U.S. ATTORNEY SAYS HIS CRIMINAL INVESTIGATION HAS BROADER SCOPE

The chairmen left the meeting late Monday at the Capitol with some saying an announcement would come in the morning.

“I think there's a lot of agreement,” Rep. Eliot Engel of New York, the chairman of the Foreign Affairs Committee, told reporters. "You’ll hear about some of it tomorrow.”

What remained uncertain was whether Pelosi would reach beyond the Ukraine probe to former Special Counsel Robert Mueller's findings of Trump's actions in his report on Russian interference in the 2016 election.

WHY DOES CNN'S ASHA RANGAPPA STYLE HERSELF AS LAW ENFORCEMENT EXPERT?

“A lot of us believe that what happened with Ukraine especially is not something we can just close our eyes to,” Engel said. “'This is not a happy day. I don’t get any glee at this, but I think we’re doing what we have to do. We’re doing what the Constitution mandates that we do.”

In drafting the articles of impeachment, Pelosi is facing a legal and political challenge of balancing the views of her majority while hitting the Constitution's ostensibly high bar of "treason, bribery or other high crimes and misdemeanors."

Rep. Doug Collins of Georgia, the top Republican on the Judiciary Committee, said Democrats are racing to jam impeachment through on a “clock and a calendar” ahead of the 2020 presidential election.

“They can't get over the fact that Donald Trump is the president of the United States, and they don’t have a candidate that can beat him," Collins said.

Collins accused Democrats of engaging in a “smear” campaign against lawmakers by disclosing phone records.

As the House pushes ahead toward votes, Giuliani said Monday he'll soon be releasing findings from his own recent visit to Ukraine.