Two liberal Senate Democrats said Sunday they aren't pleased with President Obama's plan for Afghanistan but acknowledged they may have few resources to stop the planned troop surge.

Senate Majority Whip and close Illinois ally of President Obama, Dick Durbin, said Sunday he is "skeptical" the president's plan to send additional U.S. troops to Afghanistan will make a difference, and was going to voice his concerns about the July 2011 deadline for beginning withdrawal during a meeting with the president on Sunday afternoon.

"I'm skeptical as to whether 30,000 more troops will make a difference. We have over 200,000 now when you count NATO forces, American forces and Afghan military forces. But I think at this point the president is moving forward," Durbin told "FOX News Sunday."

Durbin said he'd like to believe that troops will be on their way home by July 2011 but did not answer whether he would vote to fund their mission.

"You know, if you take a look at Mr. Karzai and his leadership in this country, there's a lot to be desired in terms of the last election and corruption in his government. Are we going to let American soldiers stay there indefinitely while they dither, in Vice President Cheney's words? I don't think we should. American lives are at stake. And so I want to know, at least from my point of view, what the president's meaning is when he talks about this deadline," he said.

Sen. Russ Feingold said he and his allies "will do whatever we can" to prevent the 30,000 troops from being added to the 71,000 currently on the ground. However, he acknowledged that "it's probably going to be difficult to stop it now."

"We're already working with members of both parties in both houses to question whether this funding should be approved. We're going to fight any attempts to use sort of accounting gimmicks to allow it to be funded. If there's an attempt to have an emergency supplemental, I think that's something we're going to oppose, not only on the grounds of it being an unwise policy, but also being fiscally irresponsible," Feingold told ABC's "This Week."

"The idea of continuing to spend for this war flies right in the face of the American people's priority to bring spending down," he added.

Republican Sen. John Cornyn of Texas said he supports the counterinsurgency strategy to send more troops to stabilize Afghanistan. He also questioned the announced deadline, although for different reasons.

"I hope it is conditions-based because, frankly, I don't see the benefit of telegraphing to our adversaries when we are going to quit and come home," said Cornyn, who also appeared on FOX News Sunday. 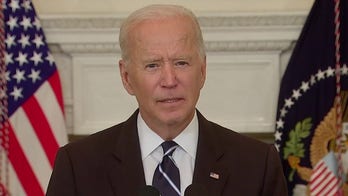