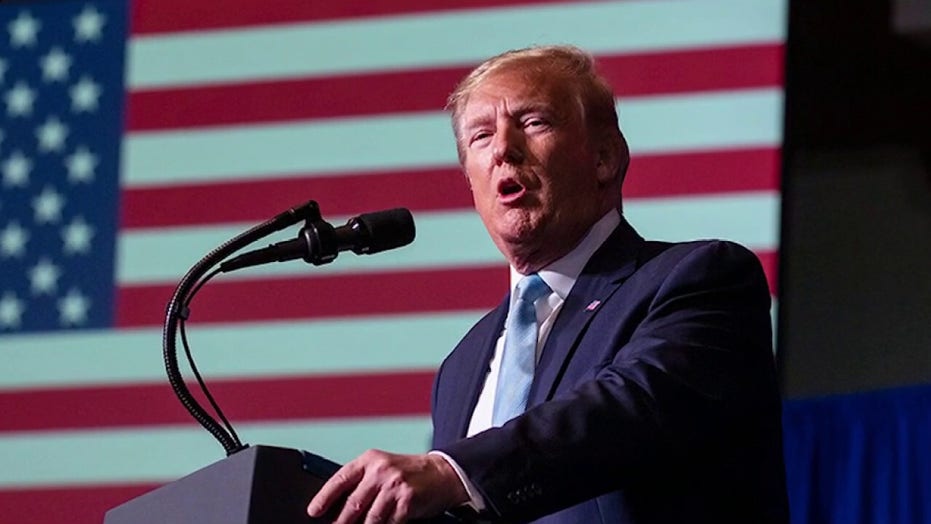 DERRY, N.H. – Sen. Bernie Sanders of Vermont was already campaigning off the Senate’s vote to acquit President Trump before it even happened.

“As many of you know, today is a kind of serious and solemn day for the country,” the Democratic presidential candidate told the crowd Wednesday morning at a campaign event in New Hampshire, which holds the first-in-the-nation presidential primary in six days. The Senate voted to acquit Trump hours later.

“I happen to disagree with Donald Trump on almost everything, but this impeachment vote is not about a difference in policy. This is about abuse of power,” the populist senator who’s making his second straight White House run emphasized.

Moments after the afternoon vote, Democratic presidential candidate Sen. Elizabeth Warren of Massachusetts tweeted, “Today is a shameful day for the US Senate, a somber day for the US Constitution, & a sad day for the United States of America. But I hope – deeply hope – people won’t give up. We fight for a government that works for everyone – not just the rich, the powerful, & the corrupt.”

And rival Mike Bloomberg spotlighted that the Republican majority in the Senate voted against allowing witnesses to testify in the impeachment trial.

"The trial was a charade, and the vote is a disgrace. I have no doubt that historians will ultimately convict this president, along with the Republicans who lack the courage to do it themselves,” the former New York City mayor and multi-billionaire business and media mogul stressed.

And Bloomberg spotlighted that “we cannot wait for history to render its verdict – that is our job. We must do in November what all but one of the Senate Republicans did not have the courage to do: vote to remove a lawless, reckless president and turn the page on this dark chapter in the life of our country.”

For the Democratic presidential contenders – the Senate’s acquittal of president will only further motivate the party’s base – which sees the trial as a sham.

But Trump’s re-election campaign also plans to benefit from the acquittal.

“The Impeachment Hoax confirmed what we knew all along - President @realDonaldTrump did NOTHING wrong. We can’t let the Radical Left get away with what they did to our Nation. The president has activated a short-term 4X-MATCH until 11:59PM. DONATE NOW,” the president’s reelection campaign tweeted.

Trump’s seen a surge in contributions dating to last autumn, when the Democratic majority impeached the president – and that trend’s expected to continue.

But it’s not just the White House race that is being impacted by the Senate acquittal. The impeachment votes by a number of senators who are up for reelection in November are under the microscope. Among them are Democratic Sen. Doug Jones of Alabama.

Minutes after Jones announced on Wednesday that he’d vote to convict Trump, the National Republican Senatorial Committee (NRSC) took aim at Jones – who faces an uphill reelection in a very red state.

"By voting to remove President Trump from office, Democrat Doug Jones has given up on serving the men and women of Alabama," NRSC spokesperson Nathan Brand argued. "Motivated by left-wing New York and California donors or the chance at a cabinet position in a Democrat administration, Jones once again disrespected the overwhelming majority of Alabamians who stand with President Trump."

Since he kicked off his White House bid last April, former Vice President Joe Biden has put a premium on landing union endorsements to bolster his argument that he’s the best Democratic presidential candidate who can defeat the president in the Rust Belt states of Pennsylvania, Michigan and Wisconsin, which flipped from blue to red in 2016 and landed Trump in the White House.

On Wednesday, Biden landed another major labor union’s backing, as the International Brotherhood of Electrical Workers announced that they unanimously decided to back Biden during their annual officers meeting.

The timing was fortunate for Biden, who was in fourth place as the delayed partial results from Monday night’s Iowa caucuses continued to trickle in.

The union represents more than three-quarters of a million active and retired electrical workers.

“Vice President Biden has been a longtime friend of working families and the IBEW,” said IBEW International President Lonnie Stephenson. “Joe has a long record of standing up for union members, and we believe it’s in the best interest of IBEW members to elect him our next president.”

Gabbard a no-show at her own protest

Dozens of supporters of Rep. Tulsi Gabbard of Hawaii protested the Democratic presidential candidate’s exclusion from a series of CNN primetime televised town halls being held Wednesday and Thursday at Saint Anselm College ahead of Tuesday’s New Hampshire primary.

But the candidate – who was billed to speak at the demonstration – didn’t make it.

Gabbard’s polling average New Hampshire -- where the candidate is spending almost all of her time on the campaign trail – stands at 5 percent. That’s ahead of Patrick, who was invited to the town halls.

CNN’s said they extended invitations to candidates who had already qualified for Friday’s Democratic presidential nomination in New Hampshire. Neither Gabbard or Patrick have

The network said that while Patrick has not qualified for the debate, he was given a spot at the town hall “as part of the network’s commitment to hosting individual town halls with the Democratic presidential candidates.”

Gabbard told Fox News last week, “It's really a disservice to voters in New Hampshire and across the country to not allow them the opportunity to hear from myself included with the other candidates as we head into election day.”

“I don't even think we've gotten a response to date about why they're excluding the first female combat veteran ever to run for president, the only woman of color in the race,” the four-term congresswoman and Iraq War veteran emphasized.

On Wednesday, dozens of Gabbard supporters chanted, “Let Tulsi speak,” over and over ahead of what was expected to be an appearance by the candidate.

Gabbard’s campaign told Fox News that the candidate wouldn’t be able to attend, as she was meeting with New Hampshire voters ahead of holding a town hall.