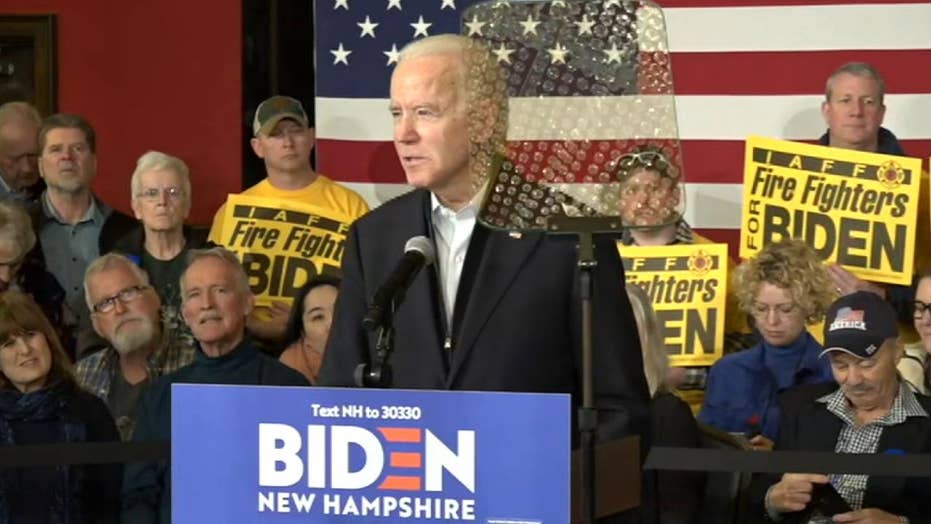 Speaking to an audience in this small southeastern New Hampshire city the morning after delayed partial returns from the Iowa caucuses showed Biden in fourth place -- trailing Buttigieg, Sanders and Sen. Elizabeth Warren of Massachusetts -- the former vice president admitted, “I’m not going to sugarcoat it. We took a gut punch in Iowa.”

PICK YOUR POLL: SANDERS IS UP IN NEW HAMPSHIRE OR HE'S TIED WITH BIDEN

Biden acknowledged that “this is not the first time in my life I’ve been knocked down.”

Biden’s lackluster performance in the Iowa caucuses makes a strong finish in next week’s primary in New Hampshire even more imperative.

He then stressed that Sanders “calls himself a Democratic socialist."

The former vice president then emphasized that President Trump is champing at the bit to label the Democrats as socialists. And he pointed to his own efforts in the 2018 midterms in helping the Democrats win back the majority of the House of Representatives.

“When Sanders attacks me for having baggage, I have to tell you the 60-plus candidates that I campaigned for, the toughest districts in the country just two years ago, don’t see me as baggage and they wanted me in their districts," he said.

And Biden said he doubted such candidates would want “Bernie Sanders to come in and campaign” for them.

Biden then used some of his most muscular language to date to criticize Buttigieg, who’s narrowly leading Sanders in Iowa as the results trickle in.

Biden said: “Mayor Pete likes to attack me as well and he’s a good man. He calls me part of the old failed Washington. Really. Was it a failure that I went to Congress to get ObamaCare passed?”

Biden then highlighted numerous other accomplishments during the Obama years and asked “Is he really saying that the Obama-Biden administration was a failure? Pete, just say it out loud.”

The former vice president then took another shot, saying “I’ve great respect for Mayor Pete and his service to this nation but I believe it’s a risk – to be straight up with you – for this party to nominate someone who’s never held office higher than mayor of a town of 100,000 in Indiana. I do believe it’s a risk.”

The only lawmaker in New Hampshire's four-member all Democratic congressional delegation said "have tremendous respect for the Vice President. But I've got to tell you, it's a risk to go after this campaign with the same message, the same ideas, the same issues that we've been litigating. I think we need new energy, I think we need a new approach ... bringing people together the way Pete does."

At the event in Somersworth, Biden was interrupted twice by climate change demonstrators.

When one of them continued to interupt Biden, he responded saying "don't act like the Trumpers, OK."

Moments later another of the protesters - a young woman - asked what Biden would do to close a coal fired plan in New Hampshire.