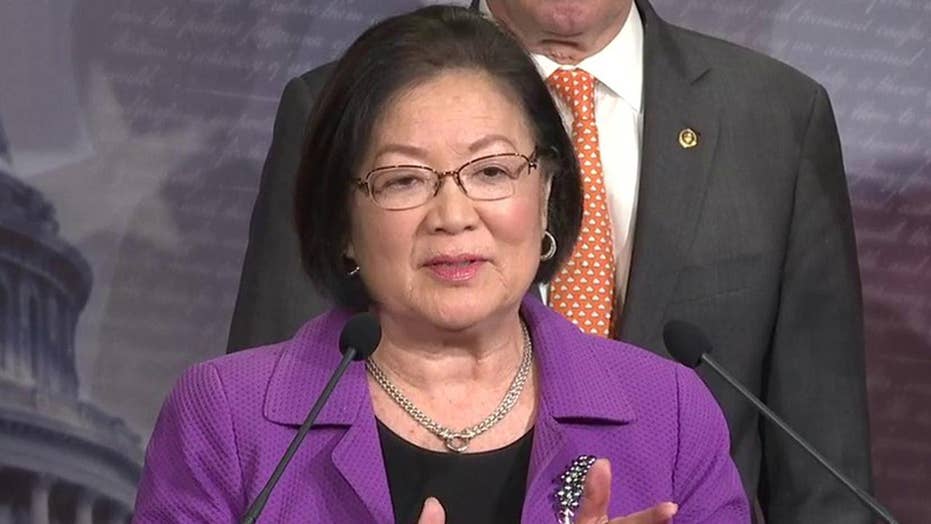 Senator Hirono on impeachment trial: GOP colleagues are 'squirming' because 'the truth hurts'

Democratic Sen. Mazie Hirono claimed Thursday that her GOP counterparts are “squirming” in their seats because they're uncomfortable hearing mounting evidence against President Donald Trump in his impeachment trial.

“Most of us get restless when we are presented with information we don’t want to hear, right?” Hirono, D-Hawaii, told reporters before Thursday’s impeachment trial resumed. “And they don’t want to hear what the president did.”

Senators, especially on the GOP side, were getting restless a day earlier during Rep. Adam Schiff’s opening speech where he outlined the evidence on why Trump should be impeached for abuse of power and obstruction of Congress.  At one point, about 15 Republicans were gone from their seats.

Senators are barred from bringing electronic devices on the Senate floor for these marathon sessions and are forced to be silent and listen to the arguments. Republicans Wednesday chalked up the absences to bathroom trips, snack breaks and the need to stretch their legs after long periods of sitting in uncomfortable chairs.

At the heart of the Democrats' case is that Trump tried to shake down the president of Ukraine for investigations into the Bidens that would boost his 2020 reelection chances and withheld a White House visit and hundreds of millions in security assistance to Ukraine.

“The president used our taxpayer money to bride that president,"  Hirono said.

“They don’t want to face that. They are squirming. Why? Because the truth hurts.”

Trump insists he’s done nothing wrong. His lawyers are making the argument that there are no constitutional grounds for impeachment and Democrats are just trying to undo the results of the 2016 election.

Trump’s legal team will have 24 hours to make their case to the Senate when the House managers finish their opening statements. Trump lawyers are expected to begin opening arguments on Saturday.