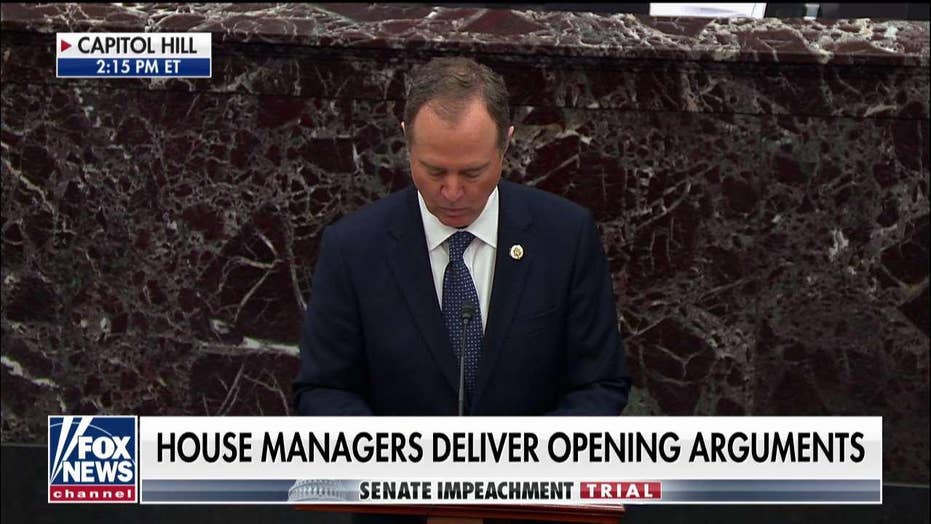 Adam Schiff: If this body is serious about a fair trial key witnesses should be allowed to testify

As Rep. Adam Schiff concluded his lengthy impeachment opening argument Wednesday afternoon, the California Democrat was speaking to plenty of empty chairs in the Senate chamber.

Around 3:20 p.m. in the chamber, there were roughly 15 open chairs from GOP senators who had left their desks for the final stretch of Schiff's speech. There were additional -- albeit fewer -- absences on the other side of the aisle, as several Democrats resorted to stretching their legs and leaving their seats, as well.

“You just have to stretch and you just got to stand. Those chairs, they look nice, [but] they are not comfortable chairs,” Sen. Lisa Murkowski, R-Alaska, said of the restlessness during Schiff’s speech.

Like Murkowski, Sen. Mike Braun, R-Ind., said the empty chairs were a symptom of discomfort and not disrespect toward the House's lead impeachment manager.

“I think you need to move around. I stand up half the time. And everybody’s got their own way now of getting through of what’s going to be a long, kind of taxing experience," Braun said.

In the second full day of President Trump's impeachment trial, senators broke up long stretches of listening to the House Democrats' case by taking bathroom breaks, stretching out and sneaking a few snacks from the well-stocked cloakrooms.

“Maybe some are conferring. Others are probably heading for the snacks that are in the cloakroom,” said Sen. Pat Leahy, D-Vt., who headed up to the third-floor gallery during a recess to meet his wife, who was watching from the balcony.

Murkowski picked up some Rolo candies and Life Savers mints as her treats.

“Chips, nut bars, lots of candy,” Murkowski said of the selection in the GOP Cloakroom. “Oh, they put in tangerines today. That’s the only thing healthy in there.”

At one point, Democratic Sens. Amy Klobuchar of Minnesota, Cory Booker of New Jersey, Joe Manchin of West Virginia and Chris Murphy of Connecticut were all standing near each other in the back of the Senate chamber listening to Schiff’s opening case for impeachment.

Murphy said that while there may be rules banning electronics on the Senate floor during impeachment, there is no specific mandate that senators sit still.

“There’s no rule that stops a senator [from] getting up and going to the bathroom as far as I understand,” Murphy said earlier Wednesday.

Sen. Lindsey Graham, R-S.C., left the chamber at one point and didn’t return for the conclusion of Schiff’s speech. An aide later said Graham was on a restroom break.

Sen. John Barrasso, R-Wy., was standing up during Schiff’s speech. Sens. Bill Cassidy, R-La.; Tim Scott, R-S.C.; Pat Roberts, R-Kan., and Marsha Blackburn, R-Tenn., all got up and reentered the chamber near the end.

Murkowski, who is no stranger to having to sit still with her regular D.C.-to-Alaska commute, said even she had a hard time remaining stationary during the Senate trial.

“I sit on an airplane for 10 to 12 hours usually twice a week,” Murkowski said. “I’m used to kind of sitting in small confined spaces. But these chairs are not comfortable.”

Murkowski said she is resorting to some of her plane exercises to manage sitting through the Senate trial.

“I got a little bit of sciatica going on. I’m doing all my airplane yoga sitting in the chair there, trying to stretch, trying to move without moving. It’s hard,” she said.

Murkowski is facing a lot of political pressure, too. Democrats, in need of four GOP votes, want the moderate Republican to join them in favor of allowing witnesses and documents into evidence in the trial.

Sen. Chuck Schumer, D-N.Y., will force another vote on the matter after the senators sit through several days of opening statements and senators' questions.

Asked if she’s heard anything persuasive so far, Murkowski said: “Gosh, we are just getting started … I am still listening. We are just on day one.”