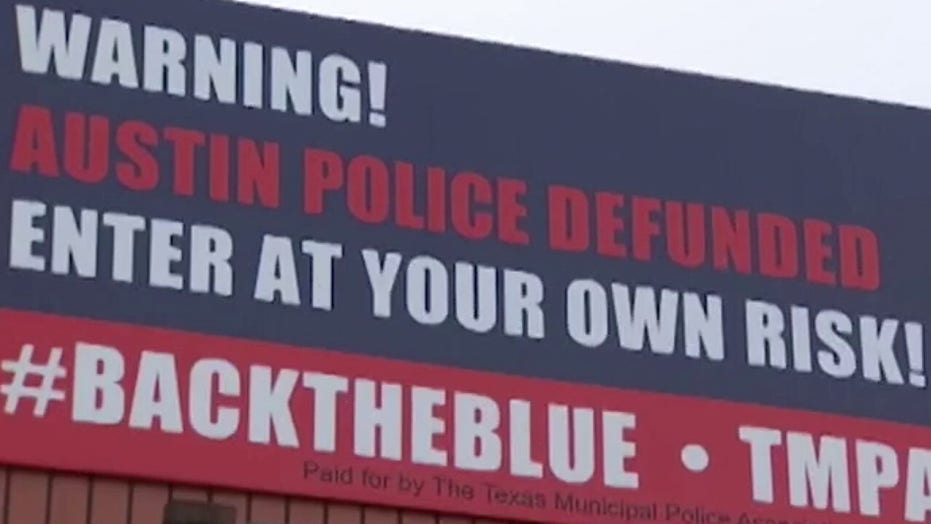 Kevin Lawrence, Texas Municipal Police Assoc., explains what prompted police to put up a billboard warning 'enter at your own risk'

The Dallas City Council voted Wednesday to slash the overtime budget for the city's police department by $7 million, but resisted broader calls to defund the department.

Most of the money from the overtime cuts will be redistributed to other purposes in the department, including more than $3.8 million to hire 95 civilian workers to replace police officers at desk jobs so they can return to street patrols.

About $1.5 million will go toward improving street lighting. It will also be reallocated toward funding so-called violence interrupters; initiatives to address poverty and efforts to stop illegal dumping.

The overtime amendment was passed in a 11-4 vote.

The Dallas Police Department budget is currently more than $500 million.

The budget passed narrowly by a 9-6 vote after a more than 12-hour meeting that was held virtually as a result of the coronavirus pandemic.

Dallas Mayor Eric Johnson, a Democrat, voted against it.

"To me, the 25% cut to the police overtime budget during a violent crime spike is particularly egregious," he said in a statement. "That is the equivalent of cutting more than half of the overtime for patrol this fiscal year, and it amounts to far more than the overtime used by the investigative units that work to solve crimes and put violent offenders behind bars."

Activists in Dallas had put forth a proposal seeking a $200 million cut from the Dallas police budget, though the initiative garnered no support among the city council.

The vote comes amid a political battle over police spending after a summer of protests and racial unrest sparked earlier this year by the death of George Floyd, a Black man, while in custody of a White Minneapolis police officer. The officers were fired the day after Floyd's death. One officer, Derek Chauvin, is charged with second-degree murder, while the three other officers who were present have been charged with aiding and abetting.

A movement to "defund the police" -- redirecting funds away from police departments toward other government agencies -- gained traction in Austin. In August, city council members voted to cut about $20 million, or 5%, from its police department and allocate those funds to things like violence prevention, housing and mental health services, according to the Texas Tribune.

“This proposal for the state to takeover the Austin Police Department is one strategy I'm looking at,” Abbott tweeted in September. “We can't let Austin's defunding & disrespect for law enforcement to endanger the public & invite chaos like in Portland and Seattle.”

“The last thing they should do is defund law enforcement, and yet, that is exactly what the City of Austin has done, and that’s what Dallas City Council voted to do in announcing its own defunding scheme last night," he said on Sept. 10.