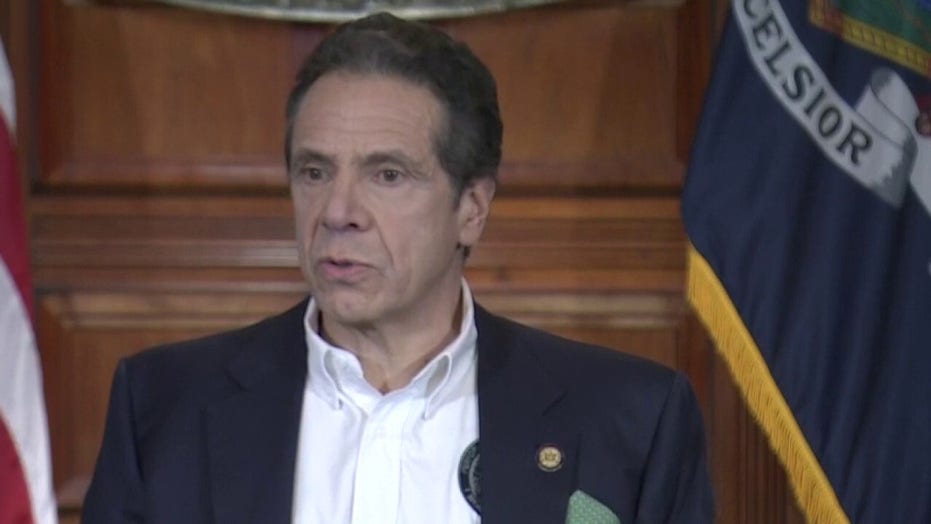 Have Democrats found an alternative to Joe Biden and Bernie Sanders for the party’s 2020 presidential nomination?

Some seem to think so: The hashtag #PresidentCuomo -- referring to New York Gov. Andrew Cuomo -- was trending on social media Saturday as the party’s voters continued to mull who should take on President Trump in November.

Just a day earlier, the hashtag #WhereIsJoe was trending as some wondered why Biden's national profile seemed to shrink amid the crisis -- a situation Biden said he planned to address next week.

Cuomo has been appearing on television daily since the coronavirus crisis began – largely because his state leads the nation, with more than 12,000 confirmed cases of the virus, also known as COVID-19.

Many viewers have been responding to Cuomo’s comments about teens and young adults, many of whom Cuomo says have been “unintelligent and reckless” in refusing to heed authorities’ advice about “social distancing” to avoid spreading the virus.

"These pictures of people on beaches, these videos of young people saying, 'This is my spring break, I'm out to party,'" Cuomo told reporters Thursday at a news briefing in Albany, the state’s capital city. "This is so unintelligent and reckless. I can't even begin to express it."

Cuomo was back at it Saturday.

“There’s a significant amount of non-compliance, especially in New York City, especially in parks,” the governor said, again referring to congregating young people, according to the New York Post. “I’m gonna go down there today, I want to see what the situation is myself.”

“President Cuomo is really raising the bar for leadership [right now], and I’m here for it. #PresidentCuomo#CoronavirusPandemic,” one Twitter user wrote.

“Proud to have Gov Cuomo not only leading NY but also the country. #PresidentCuomo.” another wrote. “We’re already tested more people than any city . . .”

The governor’s frequent appearances on television – national as well as local -- seemed to be overshadowing Biden and Sanders, the two Democrats whose presidential campaigns have largely stalled since the coronavirus crisis began.

Cuomo’s sudden emergence in the spotlight may have the two White House hopefuls worried.

On Friday, Biden – who had all but clinched the party’s nomination before the crisis began, with an impressive string of primary victories over Sanders -- announced plans to launch daily coronavirus news briefings of his own.

The announcement came as the hashtag #WhereIsJoe was trending, Mediaite.com reported.

In the same conference call, Biden admitted that Cuomo has been “doing one hell of a job.”

Sanders on Saturday suggested sending $2,000 to every American for pandemic relief – a figure that topped the $1,200 that the Senate was debating as it worked on a coronavirus relief bill.

On Friday, Sanders hosted an online roundtable from his home state of Vermont, urging Americans to work together to combat the outbreak, WCAX-TV of Burlington, Vt., reported.

The Biden and Sanders camps have also reportedly been in regular contact regarding coronavirus, filling the void as numerous states have postponed presidential primaries.

But for Sanders, the efforts may already be too little, too late, given the delegate gap between him and Biden following the most recent primaries.

However the Democrats’ situation shakes out, Biden, Sanders – and Cuomo – may each remain hard-pressed to challenge Trump in November: On Friday, results of an Ipsos/ABC News poll said a majority of Americans – 55 percent – approved of the way the president was handling the crisis, The Hill reported.