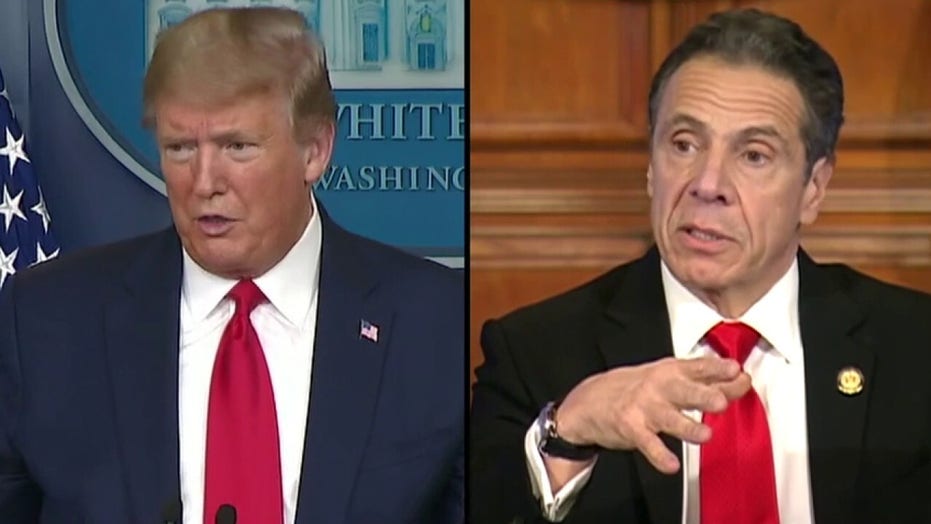 New York Gov. Andrew Cuomo is traveling to the White House to meet with President Trump on Tuesday to discuss a strategy on how the federal government and states can work together to roll out more coronavirus testing.

“I am heading to the White House to meet with President Trump to address testing,” Cuomo tweeted midday Tuesday. “We need partnership between the states and the federal government.”

He added: “We will work together to ensure a safe, stronger future for everyone.”

Cuomo, during his daily coronavirus pandemic briefing, told reporters that the purpose of the trip would be testing “and how do we do it, and how can the federal government work in partnership with the states.”

“Let’s coordinate who does what, what do the states do, what does the federal government do,” Cuomo told reporters Tuesday.

As for testing in the state, Cuomo announced over the weekend that he would launch “aggressive” testing for coronavirus antibodies this week, after the FDA approved New York’s antibody test.

“Now that we have the approved test, we’re going to be rolling it out to do the largest survey of any state populated. That has been done,” Cuomo said.

Meanwhile, the president said this week that testing was the responsibility of states, but tweeted Monday that he would “work with the governors and get it done.”

The president has touted the United States’ testing capabilities, telling reporters over the weekend that 4.18 million Americans have now been screened for the novel coronavirus—more than France, the U.K., South Korea, Japan, Singapore, India, Austria, Australia, Sweden and Canada combined.

Trump teased Cuomo’s visit during the White House coronavirus task force meeting Tuesday, saying that he thinks “the governor’s going to come in to see us tomorrow…Andrew is going to be coming in with some of his people. So we look forward to that.”

Trump went on to tout Cuomo’s response to coronavirus in New York, which has become the epicenter of the COVID-19 pandemic in the U.S.

“They’re getting it together in New York,” Trump said Monday. “A lot of good things are happening in New York.”

Trump’s friendly tone related to Cuomo’s efforts comes after the two engaged in a heated social media battle on Friday.

The clash began when Cuomo, during his press conference, complained about funding while discussing the president’s set of guidelines focused on reopening the economy amid the crisis.

He added: “Don’t pass the buck without passing the bucks.”

The president fired back on Twitter minutes later, slamming the governor for “complaining,” and touted his administration’s efforts in helping aid New York.

That back-and-forth came as the latest escalation of the clash between Trump and Cuomo,  after the two sparred throughout the week over who was ultimately responsible for reopening the economy, the states or the federal government.

On Tuesday, Cuomo was asked how he would handle the meeting with Trump, considering their current relationship, to which he replied: “Life is a fine line…everything is a fine line.”

“I’ll tell you how I negotiate the fine line,” he continued. “You tell the truth.”

He added: “I’ll do whatever I’m supposed to do, just tell me.”

Cuomo also extended his New York PAUSE executive order through at least May 15, keeping nonessential businesses closed and nonessential workers at home in an effort to further curb the spread of the virus in the state. Cuomo also issued an order requiring all New Yorkers to wear face masks or coverings in public places.

As of Tuesday, New York reported more than a quarter of a million positive cases of COVID-19 in the state and more than 18,600 deaths.