'We've seen people suffer for too, too long,' Cuomo says. A panel debates the complicated issue on 'Fox &amp; Friends.'

New York Gov. Andrew Cuomo signed a bill Monday that could allow lawmakers on Capitol Hill to obtain President Trump’s state tax returns, in what has been described as a "workaround" after failed efforts by House Democrats to get the president's federal returns.

Previously, state tax returns had to remain private with an exception for law enforcement. The new bill -- which could face a legal challenge in the future -- adds an exception that says the state’s Commissioner of the Department of Taxation and Finance has to turn over information requested by the head of the House Ways and Means Committee, Senate Finance Committee, or Joint Committee on Taxation.

“Tax secrecy is paramount -- the exception being for bonafide investigative and law enforcement purposes," Cuomo said in a statement. "By amending the law enforcement exception in New York State tax code to include Congressional tax-related committees, this bill gives Congress the ability to fulfill its Constitutional responsibilities, strengthen our democratic system and ensure that no one is above the law.”

President Trump's legal team responded to the signing of the bill with a statement from attorney Jay Sekulow.

"This is more Presidential harassment. We will respond to this as appropriate," Sekulow said. 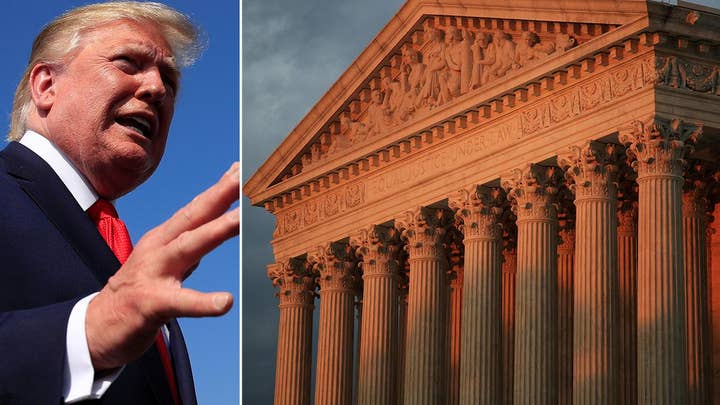 The New York bill requires a certification from the requesting committee chair that there is a legitimate legislative purpose, and that their committee already requested federal tax returns from the Treasury Department.

The House Ways and Means Committee previously made such a request, but Treasury Secretary Steve Mnuchin refused when he determined that lawmakers did not show a legitimate legislative purpose for their request.

The committee then sued the Trump administration after Mnuchin and IRS Commissioner Charles Rettig failed to comply with a subpoena Democrats issued for Trump’s federal returns. Rep. Lloyd Doggett, D-Texas, went so far as to call for Mnuchin and Rettig to be held in contempt and jailed for refusing to comply.

With the signing of the New York bill, House Democrats seem poised to at least get Trump's state returns, which are likely to include information similar to the federal returns. Local Republicans slammed their colleagues on the other side of the aisle for getting involved in D.C. politics instead of focusing on state matters.

"The Democratic legislature and Governor Cuomo are suffering from Trump Derangement Syndrome and playing politics at the expense of doing the people’s business," New York Republican Party Chairman Ed Cox told Fox News when the state Senate passed the bill in May.

When the New York bill was making its way through the state legislature, Cuomo indicated he would sign it, provided it applied to everyone and not just Trump. While the bill does meet that standard, critics believed it to be unconstitutional because it was motivated by a desire to specifically target Trump. The Constitution prohibits what is known as a "bill of attainder," or a law that singles out an individual person for punishment.

The bill itself does not make any reference to Trump or any other person, but Democrats like state Sen. Brad Hoylman, who sponsored a version of the bill, and House Judiciary Committee Chairman Jerrold Nadler, D-N.Y., specifically mentioned Trump in reference to the legislation. Nadler described it in the context of House Democrats' quest to get Trump's tax returns, calling it "a workaround to a White House that continues to obstruct and stonewall the legitimate oversight work of Congress."

In the past, presidential candidates traditionally disclosed their tax returns prior to the general election. Trump said he would not do so because he was under audit.