NY assemblyman on Cuomo nursing home controversy: ‘I am not going to be complicit’

New York Gov. Andrew Cuomo’s office denied claims made Wednesday by Lindsey Boylan, a former aide to the governor who accused him of sexual harassment — including during an October 2017 flight.

Boylan, the former deputy secretary for economic development and special adviser to the governor, penned a Medium post in which she alleged that Cuomo created a "pervasive" culture of "sexual harassment and bullying." She detailed an incident in which Cuomo allegedly suggested the pair play "strip poker" as they flew together following an event, among other instances of alleged "inappropriate behavior" and harassment during her tenure at the governor’s office.

"We were flying home from an October 2017 event in Western New York on his taxpayer-funded jet," Boylan wrote. "He was seated facing me, so close our knees almost touched. His press aide was to my right and a state trooper behind us." 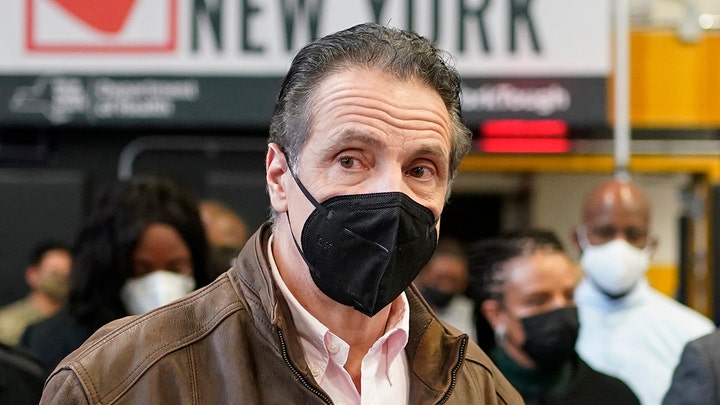 "As we said before, Ms. Boylan's claims of inappropriate behavior are quite simply false," Girouard said in a statement.

Girouard cited flight logs detailing Cuomo’s plane trips in Oct. 2017, saying there was "no flight where Lindsey was alone with the governor, a single press aide and a NYS trooper." Girouard cited a joint statement from several former aides who she said shared flights with the governor and Boylan during that period – John Maggiore, Howard Zemsky, Dani Lever and Abbey Fashouer Collins – who denied the event occurred as Boylan described.

"We were on each of these October flights and this conversation did not happen," the aides said.

Boylan did not immediately respond to a request for further comment.

She added that she felt "compelled to tell [her] story because no woman should feel forced to hide their experiences of workplace intimidation, harassment and humiliation — not by the Governor or anyone else."

Boylan detailed several specific instances in which Cuomo allegedly engaged in inappropriate behavior. She wrote that she "complained to friends that the Governor would go out of his way to touch me on my lower back, arms and legs."

The former aide said she began to "fear" Cuomo after an uncomfortable encounter at his office in December 2016. She said Cuomo "smirked" as he showed her a cigar box he received from former President Bill Clinton while he served in his Cabinet as HUD Secretary.

"The two-decade old reference to President Clinton’s affair with Monica Lewinsky was not lost on me," Boylan said.

Cuomo purportedly encouraged Boylan to look up photos of his rumored former girlfriend, telling her that "[they] could be sisters." In another incident at Cuomo’s New York City office, Boylan said the governor kissed her on the lips.

"After that, my fears worsened. I came to work nauseous every day. My relationship with his senior team — mostly women — grew hostile after I started speaking up for myself," Boylan said. "I was reprimanded and told to get in line by his top aides, but I could no longer ignore it. On September 26, 2018, I sent a mass email informing staff members of my resignation."

Boylan’s allegations emerged as the embattled governor faces calls to resign over the state’s handling of its nursing home crisis during the coronavirus pandemic. Federal authorities have begun an investigation into the matter, though Cuomo has not been personally accused of any wrongdoing and has maintained his office acted properly.

"There must be an immediate independent investigation into Governor Cuomo’s workplace behavior, conducted by an entity over which Cuomo does not have any appointment or supervisory powers," the group said.