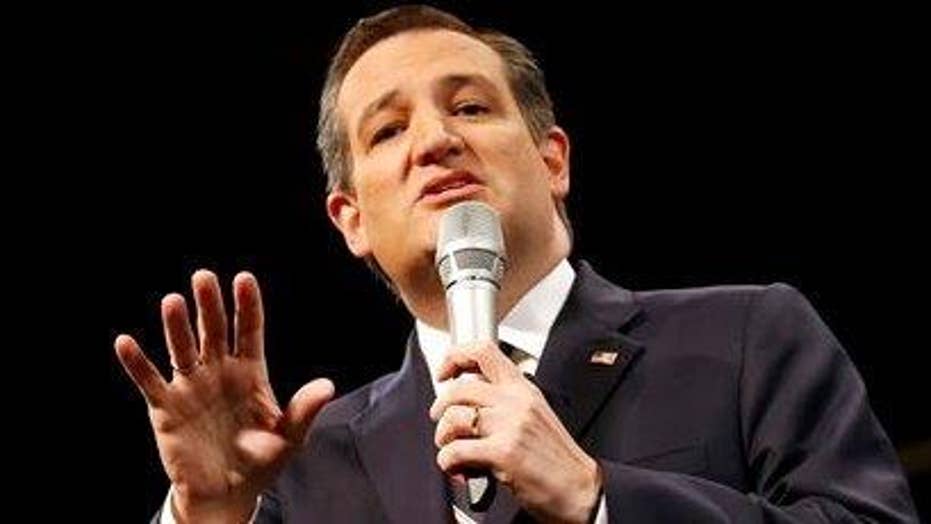 Ted Cruz counting on the support of Texans

Will voters angry with the political class vote for their senator or Donald Trump?

Texas Sen. Ted Cruz on Sunday pushed the call for front-running GOP rival Donald Trump to release his tax returns, suggesting the IRS documents might show connections to “mafia” businesses, donations to Planned Parenthood and other items that would ruin his White House bid.

“Maybe those business deals are more extensive that reported,” Cruz told NBC’s “Meet the Press.” “Primary voters deserve to know before the nomination because Hillary Clinton will.”

Cruz, who has released five years of returns and two-page summaries for the past four years, repeated 2012 GOP presidential nominee Mitt Romney’s suggestion last week that Trump’s returns could include a “bombshell.”

He said Trump’s real estate ventures reportedly have been tied to mafia-run S&A Construction, "which was owned by 'Fat Tony' Salerno, who is a mobster who is in jail.”

He also suggested on ABC’s “This Week” that the returns might show the billionaire businessman has exaggerated his wealth.

“A lot of media outlets have reported that he doesn't make nearly as much money as he says he does. We don't know. But he's clearly hiding something,” said Cruz, who, with Florida Sen. Marco Rubio, is Trump’s closest rival going into Super Tuesday -- in which the GOP primary field of five will compete for 595 delegates across 11 states.

Cruz also tried to turn into a tax issue Trump’s support for the help Planned Parenthood provides to women, though the billionaire businessman doesn’t back abortions.

“At every debate, it seems, he praises Planned Parenthood,” Cruz said. “Maybe he's written them a bunch of checks.”

Trump told “Fox News Sunday” that he’s filed “voluminous” paperwork and that information about his income is available in Federal Election Commission filings.

He declined to reveal his gross income or effective tax rate and didn’t respond to a remark that the IRS says he can disclose his records, despite an audit, which Trump has cited for the delay.

“I think it's very unfair,” said Trump, despite making promises to release his tax records. “I've been singled out.”

Romney released tax records in 2012, and Clinton did last year.

Rubio and Cruz produced the first two pages of their filings to the Internal Revenue Service, which don't include key details about subjects such as their tax deductions.

They have left the door open to releasing more information, with Cruz essentially daring his opponents to go first.

"If Marco wants to release the complete thing for the recent years, I'm happy to do so as well," Cruz said.

Every major party candidate since 1976 has released his full tax returns at some point during the campaign, according to Joseph Thorndike, a tax historian and contributing editor to Tax Notes, an accounting trade publication.

But while Thorndike faulted Trump for backing away from releasing his tax returns, he called partial releases such as those by Rubio and Cruz "fake transparency."

The tax returns released by the two lawmakers, combined with their previously released personal financial disclosures, offer an overview of their financial lives since arriving in the Senate.

Rubio released portions of his 2010 through 2014 returns, adding to 10 years of tax documents he had previously made public.

Since winning election to office in Washington, they show Rubio's income has ranged from $276,059 to $938,963, and he has paid between $46,500 and $254,894 in federal income tax. Most of the income came from a business that collected royalties on two books: Rubio's memoir, "An American Son," and a pre-campaign tract, "American Dreams."

Cruz released portions of his 2011 through 2014 returns. They show he and his wife Heidi brought in an annual average of $1.13 million with large amounts of their income coming from Cruz's work in 2011 and 2012 at the law firm Morgan, Lewis and Bockius, and his wife's work at Goldman Sachs.

The returns show that Cruz and his wife reported more than $5.2 million in income in those years and paid an average effective tax rate of 37.6 percent.

The summary returns yield few details on either candidate's charitable giving, but they indicate that the Texas senator, who has banked on the support of evangelicals and appealed to voters on matters of faith, hasn't tithed a full 10 percent of his income.