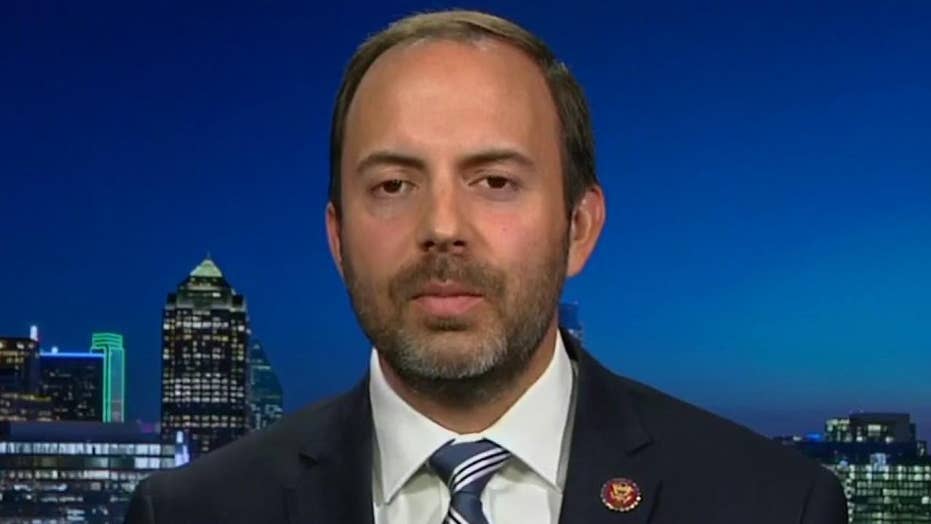 Rep. Lance Gooden, R-Texas, argues Republicans are not united on spending trillions of dollars on another coronavirus stimulus especially if it involves concessions to Democratic House Speaker Nancy Pelosi.

White House officials and Democratic leaders ended a week of negotiations without a deal on the next coronavirus aid package, or even a clear path forward, amid growing concerns that talks may collapse altogether.

The clock is ticking for both parties to meet their self-imposed Friday deadline. If they miss it, Meadows has suggested there's "no sense" in continuing discussion.

"I've become extremely doubtful that we’ll be able to make a deal if it goes well beyond Friday," said Meadows, a founding member and former chair of the conservative House Freedom Caucus who joined the White House this year.

The impasse in negotiations puts at risk potentially trillions of dollars in aid for families, businesses and the U.S. economy, including a fresh round of $1,200 stimulus checks, extra unemployment aid for millions of out-of-work Americans, $100 billion to help reopen schools and relief for cash-strapped state and local governments.

"Without more stimulus, the bottom could fall out from the American economy," said Josh Lipsky, director of programs and policy at the Atlantic Council. "Millions of unemployed citizens, renters across the country, small business owners, and every state government are asking for help in a time of crisis. We can worry about the price tag later. When your house is on fire, you don’t ask the fireman how much the hose costs."

Whether to extend the supplemental $600 a week in jobless aid has proven to be a key sticking point in negotiations. Democrats have maintained the sweetened benefits need to be extended through the end of the year, while Republicans have argued that it disincentivizes Americans from returning to jobs that pay less, a notion economists have disputed.

GOP lawmakers have proposed a $200-a-week replacement instead.

When the $600-a-week federal benefit expired last Friday, the typical unemployment check returned to an average of $330 per week, a significant benefit cut for individuals collecting the aid. More than 30 million Americans, or roughly one in five workers, are receiving unemployment benefits, according to Labor Department data.

The end of the $600 benefit is draining about $15 billion per week from the economy, according to one estimate from the Century Foundation, raising fears of a "fiscal cliff" that will hurt both individual households and the economy's recovery.

Consumer spending accounts for about two-thirds of the nation's GDP, the broadest measure of goods and services produced in the country.

A separate study by the Economic Policy Institute found that expanding jobless aid boosted personal income by $842 billion in May; extending the heightened benefits through mid-2021, the nonprofit said, would provide an average quarterly boon to GDP of 3.7 percent.

"Every day Congress delays raises the chance of a double-dip recession," Lipsky said.

For the past 20 weeks, jobless claims have continuously topped 1 million; before the pandemic, the record high was 695,000 set in 1982.

The Labor Department's July jobs report released on Friday showed that employers added 1.8 million jobs in July, sending the unemployment rate down to 10.2%.

While it marked the third consecutive month of job growth in the millions, the economy has so far added back less than half -- about 42 percent -- of the 22 million jobs it lost during the pandemic. There are roughly 10.6 million more out-of-work Americans than in February.

Federal Reserve Chairman Jerome Powell warned during congressional testimony in June that recent economic improvements could be jeopardized if Congress turned off the federal support for workers and businesses.

Both parties are under growing pressure to reach a deal after the sweetened unemployment and several other CARES Act provisions ended, dealing a major financial blow to the millions of Americans who lost their jobs during the pandemic.

President Trump has threatened to act unilaterally, bypassing Congress if they're unable to strike a deal. In a tweet, the president said he was considering executive orders to continue expanded unemployment benefits, reinstate an eviction moratorium, cut payroll taxes and continue a suspension of student loan repayments.