As the debate builds over when and how to reverse the economic shutdowns and stay-at-home orders meant to slow the spread of the coronavirus, government statistics show the disease poses a significant danger to older generations yet largely spares those in their middle age or younger.

While this disparity was previously known, statistics released as the pandemic goes on starkly illustrate its real-life effects. Centers for Disease Control and Prevention (CDC) statistics show more than 80 percent of those dying of the virus are over 65 years old.

The CDC's official count is lower than the actual number of American coronavirus deaths, which is now upward of 90,000, "because of the lag in time between when the death occurred and when the death certificate is completed, submitted to NCHS and processed for reporting purposes." But the agency's reporting underscores prior warnings that the coronavirus generally hits the elderly the hardest.

The numbers in individual states, which are reported more quickly and often in more detail, can be even starker, some observers have pointed out. In Pennsylvania as of May 17, for example, 87.4 percent of reported deaths are in people 65 years old or older, and 44 percent of deaths have been in people over 84 years old. Just over half of Pennsylvania's deaths have occurred in hospitals, but a whopping 43.4 percent have happened at long-term care facilities.

In Massachusetts, 21,177 of 87,925 confirmed coronavirus cases, or 24 percent, are in people 70 years old and above. Of those who have died, 5,058 of 5,938 are aged 70 and above — or 85 percent. Those numbers also represent a striking rate of mortality among people over 70 years old of nearly 24 percent, at least in Massachusetts' official numbers.

Just 1.5 percent of reported deaths in Massachusetts are among people aged 50-59.

Counts at both the national and state level are complicated by factors including different methods of reporting, deaths erroneously reported as other illnesses, incomplete testing that leaves many who have come down with the virus but have no or only minor symptoms uncounted and time lag as information trickles up between different agencies and governments. But the numbers still illustrate that older Americans who catch the disease are in significant danger while their younger counterparts are at much less risk. 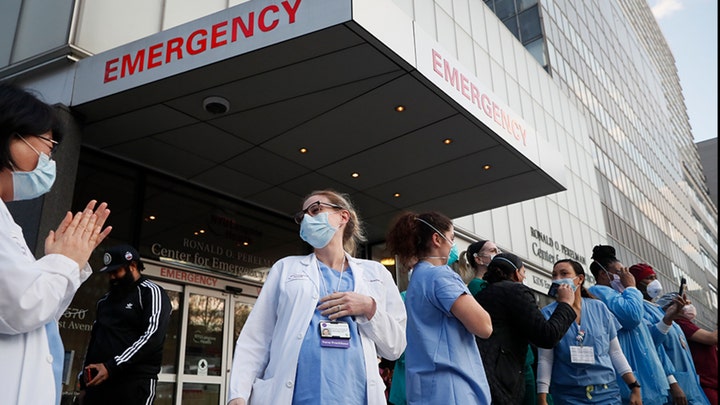 This was a point made by Dr. Simone Gold, an emergency medicine specialist based in Los Angeles, in a conversation with Fox News on Wednesday. Gold is the co-founder of "A Doctor a Day," a group of doctors who oppose state-imposed shutdowns over the potential health harms of the measures.

"When you look at the data of the deaths and the critically ill, they are patients who were very sick to begin with," she said, "There's always exceptions. ... But when you look at the pure numbers, it's overwhelmingly patients who are in nursing homes and patients with serious underlying conditions. Meaning, that that's where our resources should be spent. I think it's terribly unethical... part of the reason why we let [the virus] fly through the nursing homes is because we're diverting resources across society at large. We have limited resources, we should put them where it's killed people."

People of all ages, of course, have been shown to catch the coronavirus. And there have been reported health complications even in children that could potentially be linked to the disease. National Institute of Allergy and Infectious Diseases Director Dr. Anthony Fauci in a Senate hearing last week warned that it is still unclear if there could be long-term harm to children associated with the coronavirus.

“We don't know everything about this virus … especially when it comes to children,” Fauci said in the Senate hearing. “We ought to be careful and not cavalier.”

But with nearly 39 million Americans out of work due to the economic shutdowns, hospitals deftly managing their coronavirus caseloads without being overwhelmed and some doctors who oppose the shutdowns warning that the health effects of forcing people to stay at home are becoming a "mass casualty incident," some are aggressively angling to lift the restrictions soon.

Fauci, on the other hand, has touted reopening guidelines released by the White House which require states to have two uninterrupted weeks of declining case numbers before proceeding to the first, limited reopening phase. States would then have to continue to meet certain benchmarks before opening further.

"As I have said many times publicly, what we have worked out is a guideline framework for how to open America again,” Fauci said at the hearing last week. "If some areas – cities, states or what have you – jump over those barriers, checkpoints and prematurely open up without having the capability of being able to respond effectively, and efficiently, my concern is that we will start to see little spikes that might turn into outbreaks."

Fauci, the face of the White House coronavirus task force, added that places that reopen early could bring about preventable "suffering and death" and "turn the clock back instead of going forward."

HUNKER DOWN: SOME STATES SAY NO FULL-SCALE REOPENING UNTIL CORONAVIRUS VACCINE, TREATMENT IS READY

The battle over sending children back to school, adults back to their offices and letting people engage in activities like eating out or attending sporting events has led to passionate differences in opinion among government officials, medical experts and the general population.

President Trump has repeatedly said he wants to "reopen our country" while some governors have vowed not to fully reopen until there is a vaccine or a treatment for the coronavirus.

"Until either a proven vaccine is in our midst or proven therapeutics are widely available, we cannot firmly enter the new normal, which eventually awaits us when life will once again return to all of our workplaces, downtowns and main streets," New Jersey Gov. Phil Murphy said in a press conference earlier this week. "Most importantly, we will continue to be guided by the principle that public health creates economic health. And if we begin to see a backslide in public health, we will have to also pull back on the reins of our restart."

Most medical experts, including Fauci, have urged caution as states move to reopen, but some are becoming more concerned about the health effects of continuing the lockdowns.

Protests against the coronavirus restrictions have swept through many state capitals, but an Associated Press-NORC Center for Public Affairs Research poll released Tuesday found 83 percent of Americans are at least somewhat concerned that lifting restrictions in their area will lead to additional infections, with 54 percent saying they are very or extremely concerned that such steps will result in a spike of COVID-19 cases.

Fox Business' Megan Henney and The Associated Press contributed to this report.