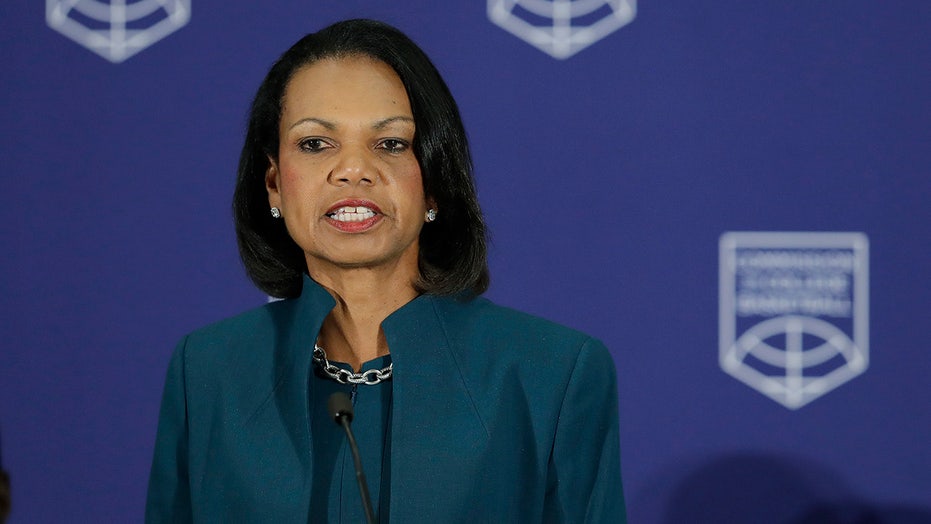 Former Secretary of State Condoleezza Rice in an op-ed Thursday condemned violence but said George Floyd’s “horrific death should be enough to finally move us to positive action.”

“In the wake of Floyd’s death, Americans and people around the world are experiencing shock, grief, outrage — a set of emotions that too often are repeated. If the past is a guide, these feelings will fade and we will return to our lives,” the George W. Bush administration secretary of state wrote for The Washington Post. "But something tells me — not this time. Floyd’s horrific death should be enough to finally move us to positive action.”

She said “systemic change” is necessary to make systems more just, but “all the structural reforms in the world” would not be enough to “remove the shadow” over incidents like the death of Floyd.

“Our country has often moved forward and been made better through peaceful protests,” she wrote. “But our cities must stop burning. Innocent people, including many minority and immigrant business owners, are watching their livelihoods go up in smoke.”

Rice stated that subtle racism can be perpetrated by those with the best intentions.

“To be black is to be forced to overcome implicit and explicit reactions to the color of your skin. It might be dismissiveness or underestimation or presumption of how you think. In some circumstances, it might be fear. We encounter these responses even among decent people who sincerely do not want to react that way,” Rice wrote.

She called to mind other pivotal moments in the civil rights movement, like Rosa Parks’ bus moment in 1955 and the bombing of a church in her hometown of Birmingham, Ala. in 1963.

"Some six decades later, perhaps all of us — regardless of skin color — are, to quote Mississippi sharecropper and civil rights activist Fannie Lou Hamer, 'sick and tired of being sick and tired.'" Rice wrote.

She said that society “is not color blind and probably never will be.”

“Unless and until we are honest that race is still an anchor around our country’s neck, that shadow will never be lifted. Our country has a birth defect: Africans and Europeans came to this country together — but one group was in chains. In time, the very Constitution that counted slaves as three-fifths of a man became a powerful tool in affording the descendants of slaves their basic rights. That work has been long and difficult, but it has made a difference,” Rice wrote.

Rice, who is now a senior fellow at the Hoover Institute, said that when she grew up in “segregated Jim Crow Alabama,” no one “batted an eyelash” if police killed a black man.

She said it was a “source of pride” that so many had peacefully taken to the streets to say that they to are “sick and tired of being sick and tired.”

“Yet protests will take our country only so far. The road to healing must begin with respectful but honest and deep conversations, not judgments, about who we were, who we are and who we want to become,” Rice wrote.

She called on Americans to think about what they would do to move the country forward, adding that her personal passion was educational justice, calling it a “partial shield against prejudice.”

“I want to discuss why the learning gap for black kids is so stubborn and what can be done about it. What is your question about the impact of race on the lives of Americans? And what will you do to find answers?”