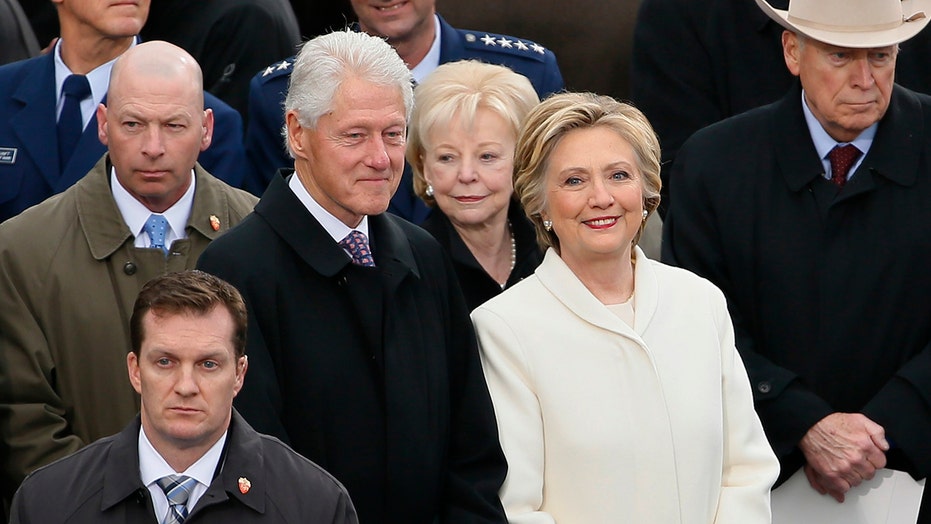 Former Democratic president Bill Clinton and former Democratic presidential nominee Hillary Clinton on Sunday both weighed in on the fight over the seat of the late Justice Ruth Bader Ginsburg, who was a trailblazer for women's rights and the face of the liberal bloc on the Supreme Court -- and Hillary Clinton accused Republicans of a "lust for power" in moving to quickly confirm Ginsburg's successor.

Hillary Clinton was part of a major Supreme Court battle after the death of late Justice Antonin Scalia in 2016 as she ran for president. Senate Republicans chose to hold Scalia's seat open until after the presidential election that year, meaning that Clinton was running with a Supreme Court seat on the line. Now President Trump and Democratic presidential nominee Joe Biden should be doing the same, she said, and Republicans are in the wrong for trying to push through a nomination before Inauguration Day in January.

"The decision that Senator McConnell made back in 2016 in the midst of that presidential election, but at a much earlier time when Justice Scalia unexpectedly passed away, is what should be the standard now," Hillary Clinton said on NBC's "Meet The Press" Sunday. She added Republicans should be "held to account" for their previous actions.

Republicans argue that 2020 is different than 2016 -- the Senate in 2014 was elected to serve as a bulwark against then-President Barack Obama, they say, and was elected in 2018 to support Trump. Democrats say that argument is dishonest.

Bill Clinton, as the president who nominated Ginsburg to the Supreme Court, also opined on Republicans' plans, but first reflected on his relationship with the late justice who has been praised by those on both sides of the aisle since her death Friday.

"She was a force for equality for men as well as women," Bill Clinton said on CNN's State of the Union. "She was consistent and she did it in a way that was level headed and on the level and respectful of different opinions and other judges on the court."

Clinton added, regarding when he nominated Ginsburg to the court: "She was disarmingly straightforward. We hadn't been talking but a couple of minutes before I felt like we were just two friends having an honest conversation about American history, the Constitution, and the law and how it affected real people."

Bill Clinton also slammed Republicans for aiming to immediately confirm a successor to Ginsburg without waiting for the results of the presidential election.

"Well it's superficially hypocritical, isn't it," he said. "Mitch McConnell wouldn't give President Obama's nominee, Merrick Garland, a hearing 10 months before the presidential election. And now that meant that we went a long time with eight judges on the court... Both for Senator McConnell and President Trump their first value is power and they're trying to jam the court with as many ideological judges as they can."

Bill Clinton also tongue-in-cheek gave McConnell credit, saying, "there's a case to be made for the argument" McConnell made in 2016 for letting the voters decide who they wanted nominating the next Supreme Court justice. He said what McConnell is arguing now "doesn't cut any mustard."

While then-President Bill Clinton may have been the one to nominate Ginsburg, Hillary Clinton was the one who recommended that he consider Ginsburg for the seat. On Sundya, she reflected on her thoughts on the late justice, as well.

"I had known Ruth Bader Ginsburg for a number of years and I had followed her work, I was a great admirer of her groundbreaking litigation," she said, while praising Ginsburg's time as a law professor and as an appellate judge. Clinton also praised "how well she got along with her colleagues including at that time Judge Scalia before he was elevated to the Supreme Court."

She added that she asked her husband to "take a very hard look at Judge Ginsburg" but that  "probably her most effective advocate was her husband Marty ... Her love affair, her long marriage with her partner Marty was really a sight to behold... He was in her corner from the very moment he met her at Cornell right until the very end."