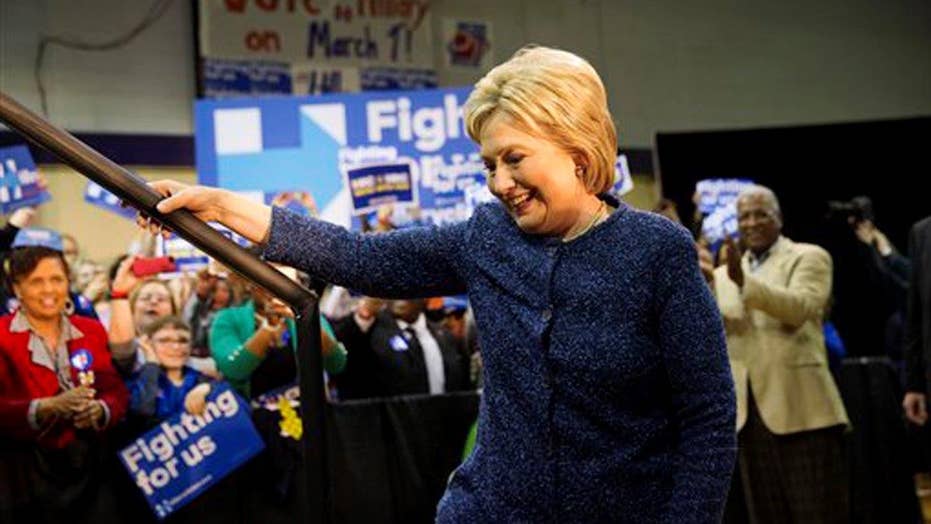 Hillary Clinton paid tribute Saturday during her primary victory rally to the mothers of black victims killed by police and civilians – while ignoring the rising number of police killed by gunfire in the line of duty this year.

The Democratic presidential candidate paused during her speech in Columbia, S.C., to honor the five women, who also campaigned with her across South Carolina before Saturday’s primary.

“They all lost children, which is almost unimaginable, yet they have not been broken or embittered,” Clinton said, adding that they have turned their “mourning into a movement.”

She recited the names of Sybrina Fulton, mother of Trayvon Martin; Gwen Carr, mother of Eric Garner; and the three others.

But she did not mention the rash of police fatalities. So far this year, according to the National Law Enforcement Officers Memorial Fund, 10 officers have been shot and killed, representing a 900 percent increase in firearms-related officer deaths compared with this time last year.

Most recently, Cpl. Nate Carrigan was fatally shot while serving an eviction notice in Colorado. And on Saturday, three officers reportedly were shot and wounded in Prince William County, Va., outside the nation’s capital.

Recently, six law enforcement officers were killed by gunfire in a period of a single week. Memorial Fund CEO Craig W. Floyd said at the time he “cannot recall any time in recent years” he’s seen so many killed in such a short span of time, calling it a “very troubling trend.” Traffic-related and other officer deaths are down so far this year, but shooting deaths have raised alarm in the law enforcement community.

Yet any mention of the “troubling trend” has been virtually absent on the Democratic campaign trail – which contrasts with the Democratic candidates’ often fiery language on police brutality against African Americans.

Both Clinton and Bernie Sanders have been talking more about these issues, as well as racial injustice in housing, the job market, the prison system and other areas.

Clinton said Saturday the five mothers who campaigned with her were “brought together by tragedy” in losing their children.

Martin, a black teenager, was killed in 2012 by George Zimmerman, in a case that revived the national debate over racial profiling.

Garner died in 2014 after being put in a chokehold by a New York City police officer. He had been confronted out of suspicion he was selling loose cigarettes.

Clinton also paid tribute to Lucia McBath, mother of teenager Jordan Davis, who was killed by a Florida man in 2012 after a confrontation over loud music playing in his car; Maria Hamilton, mother of Dontre, who was killed by a then-Milwaukee police officer in 2014 after a struggle; and Geneva Reed-Veal, mother of Sandra Bland, found hanged in a Texas jail cell in 2015.