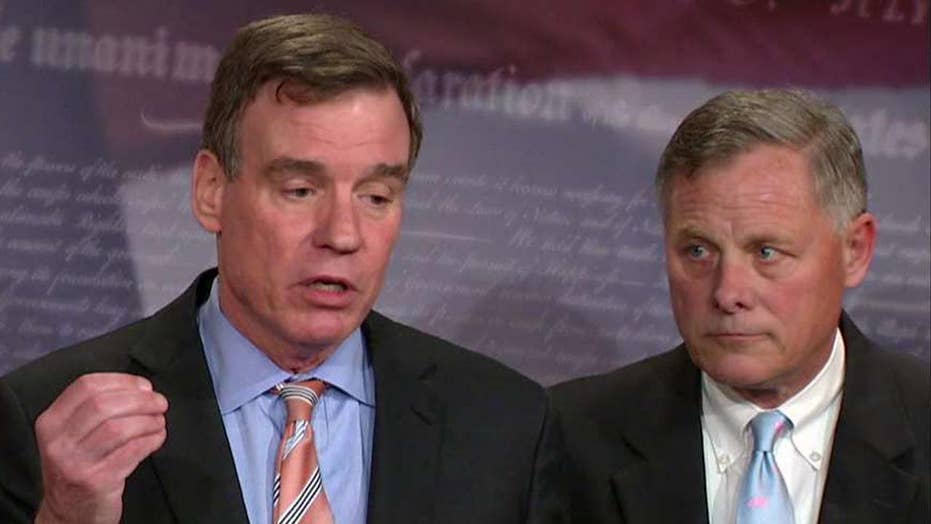 Burr and Warner tried to reassure the American people that their investigation will be professional and not partisan; Mike Emanuel explains on 'Special Report'

Key Democrats blame Russian tampering in key swing states for costing Hillary Clinton the 2016 presidential election, but a Fox News investigation found no evidence to back up such claims.

Numerous state officials and election observers said there is nothing to back up claims from members of the Senate Intelligence Committee of a targeted misinformation campaign affecting the results. The charge came last week, when the committee brass painted a picture of Moscow manipulating voters with a vast army of operatives tailoring "fake news" to affect critical states.

“There were upwards of 1,000 paid Internet trolls in Russia in effect taking over a series of computers,” Sen. Mark Warner, D-Va., said. “They can then generate news down to specific areas in Wisconsin, Michigan, and Pennsylvania.”

The charge got backing from Clint Watts, a former FBI agent called to testify before the committee last week.

“Today, you can create the content, gain the audience, build the bots, pick out the election and even the voters that are valued the most in swing states and actually insert the right content in a deliberate period," Watts said. "They pre-planned it. They were based a year and a half out.”

Fox News asked state election officials in Wisconsin, Michigan and Pennsylvania whether there were any complaints filed after the 2016 presidential election reflecting skewed Internet search or social media results. All three said there were no such irregularities reported.

“No one here received any complaints or reports of apparently deliberate misinformation campaigns,” said Pennsylvania Department of State spokeswoman Wanda Murren. “Not during the campaign or any time since. We’ve only heard of these allegations recently, in the media.”

Election experts in the political science departments of universities in the three states in question could not back up the claim, either.

“I have no information about any of this,” said Michael Berkman, professor of political science at Penn State University. “The first I heard of it was from Senator Warner and I wouldn’t know how to even begin looking into it.”

Warner’s office pointed Fox News to a study by the Oxford Internet Institute, part of Oxford University, England. The study found that a third of what it called “junk news” shared via Twitter in Michigan in the seven days leading up to the election and three days after came from conservative news sites such as Breitbart, InfoWars, Daily Caller, Liberty Alliance and Truth Feed.

But the study could identify only 2 percent of the politically related Twitter messages as coming from Russian sites like RT and Sputnik.

“From this data alone there is no clear hand of influence from Russia,” study author Philip Howard of the Oxford Internet Institute told Fox News. “The single most important source of political information was links to unverified WikiLeaks stories. We believe there was automation pushing those links around but that is our next research project.”

“Part of the reason active measures worked in the U.S. election is because the commander in chief used Russian active measures at times against his opponents,” said Watts in the hearing. Watts did not reply to a request for comment.

But experts were dubious of the claims.

“It’s a red herring and Senator Warner knows better,” said Morgan Wright, former law enforcement officer and cybersecurity adviser. “Is it possible the Russians were able to target specific counties in key swing states days ahead of the election? That’s not very probable. We’re giving the Russians way too much credit that they’ve got all this capability.”

“Right now the evidence is that the Russians did not do it,” said Patrick Anderson of the consulting firm Anderson Economic Group, which completed a forensic analysis of the 2016 election results involving a battery of statistical and data analysis techniques applied to county-by-county election data for the 2012 and 2016 elections. “We’ve done systematic analysis in multiple states. What appears to have happened is vigorous democracy, where some people were surprised by the outcome.”

Brett Healy, of the Wisconsin-based free-market think tank MacIver Institute, was emphatic that the claim of surgically targeted meddling was without foundation.

“The accusation is so juvenile and ludicrous it cannot be taken seriously,” Healy said. “If this rumor was even remotely credible, someone here in Wisconsin would have alerted the media and filed a complaint with the Elections Commission. Rural Wisconsin voters, who have a history of voting Democrat in presidential elections, decided that they had enough of the far left policies of President Obama and they took it out on Clinton.

"For the Democratic Party to attempt to blame their widespread defeat on an imaginary bogeyman is comical and a little sad,” Healey added.

Still other election observers say it’s still possible specific areas of key swing states were targeted by the Russians, even if the information isn’t publicly known.

“Senator Warner has access to confidential and classified information through his post on the Intelligence Committee,” said Barry Burden of the University of Wisconsin Elections Research Center. “Hopefully a thorough investigation will make some of this information public.”