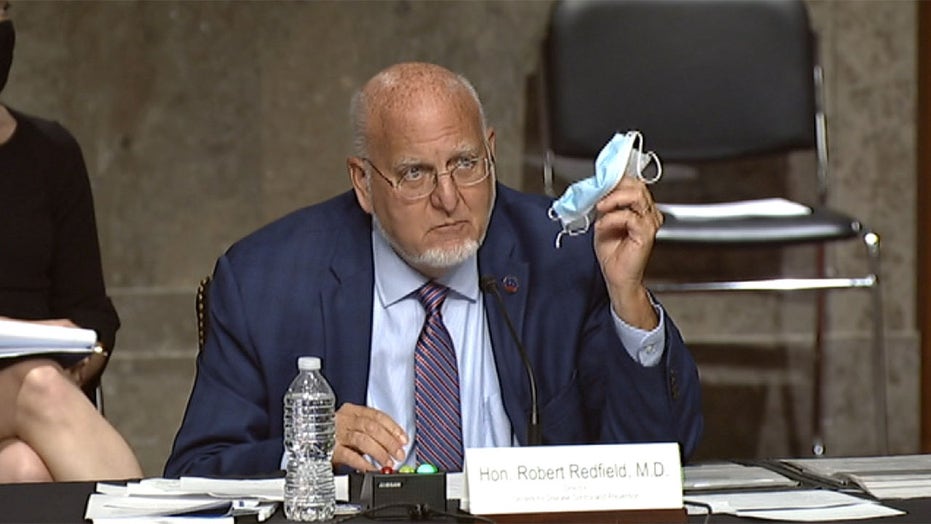 CDC Director Redfield calls on Americans to wear masks, says they may work better than a vaccine

Centers for Disease Control and Prevent Director Robert Redfield told a Senate Appropriations subcommittee on Wednesday that not only do face masks work to protect people from coronavirus, they might work even better than an eventual vaccine might.

During a hearing on coronavirus response efforts, Sen. Jack Reed, D-R.I., criticized President Trump for typically not wearing a mask and holding events where attendees did not wear them. He then asked witnesses if Trump was "undercutting" an important step that Americans can take to protect themselves. Redfield did not take the bait, but he still had plenty to say about masks.

"I’m not going to comment directly about the president, but I am going to comment as the CDC director that face masks, these face masks are the most important, powerful public health tool we have," Redfield said, holding a mask in his hand. "And I will continue to appeal for all Americans, all individuals in our country, to embrace these face coverings. I’ve said that if we did it for six, eight, 10, 12 weeks we'd bring this pandemic under control."

The CDC director then made a bold claim about just how well face masks work.

"These actually, we have clear scientific evidence they work, and they are our best defense," he continued. "I might even go so far as to say this face mask is more guaranteed to protect me against COVID than when I take a COVID vaccine, because the immunogenicity might be 70%, and if I don't get an immune response the vaccine’s not going to protect me. This face mask will."

Redfield then called on the public -- particularly young adults -- to do their part to protect themselves and others.

"I do want to keep asking the American public to take the responsibility — particularly the 18 to 25-year-olds where we’re seeing the outbreak in America continue to go like this,” he said, hand pointed vertically. “Because we haven’t got the acceptance of personal responsibility that we need for all Americans to embrace this face mask.”

Earlier in the hearing, Sen. Dick Durbin, D-Ill., brought up Trump's claim that a vaccine could be ready in as little as three or four weeks. Durbin asked Health and Human Services Assistant Secretary for Preparedness and Response Dr. Bob Kadlec if this was true, and Kadlec responded in the affirmative.

“Sir, it’s possible,” Kadlec said, explaining that because Operation Warp Speed has vaccine candidates being manufactured while they are still in the trial stages, it will be ready for distribution as soon as it is approved.

"So if, and when, whether that’s two weeks, three weeks, two months, or four months, once a clinical trial is complete and that scientific data is reviewed by the FDA and approved, then we have vaccine potentially available immediately to use," he said.

When pressed on the three- or four-week timeline, Kadlec noted that this would be for manufacturing a vaccine, but the variable remains how long it would be for trials to end and the Food and Drug Administration to approve a vaccine candidate.

Durbin asked if that meant that it would truly take longer than three or four weeks, but Kadlec said he could not predict that because trials are still going on. He did note that some are set to end in October, but it will be up to the FDA to determine whether those candidates are safe and effective.

Later on, Redfield noted that when a vaccine is available, it will take substantial resources to distribute it -- resources the CDC does not currently have. Subcommittee Chairman Sen. Roy Blunt, R-Mo., noted that the recent GOP coronavirus response bill included $6 billion for this, which Redfield said was enough, while the House's $3 trillion HEROES Act did not include anything for vaccine distribution.

Redfield was clear on just how urgent it is that lawmakers take action on this.