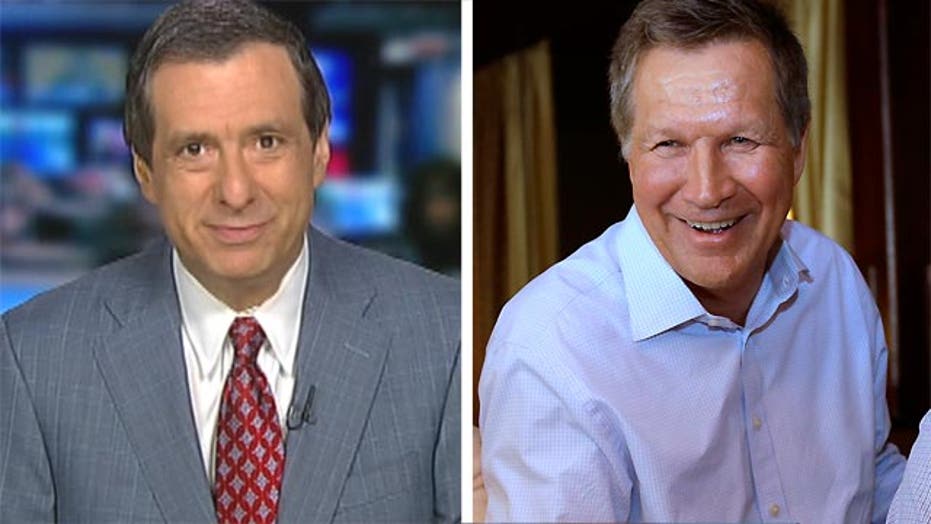 Here are some of the issues that John Kasich talked about during an hour-long conversation:

Common Core standards (he likes them).

Teacher evaluations (his father never made Mailman of the Month because he didn’t suck up to his supervisors).

Job security (“I might have some jerk walk into my office and tell me I’m out of work at the age of 52”).

Here’s what the Ohio governor either deflected or didn’t talk about:

Which early primary states he can win.

How much money he can raise.

How he can separate himself from the other 14 or 15 presidential candidates.

Kasich hasn’t formally declared, but he’s set a date—July 21—for a likely announcement.

It’s an interesting dilemma, whether a candidate can truly run on his record. Modern politics requires breaking through the static. And as things stand now, Kasich is so low in the polls that he wouldn’t make the Fox News debate next month, even though it’s being held in Cleveland.

The governor doesn’t like the term compassionate conservative, so associated with Jeb Bush’s brother, but he dismisses the notion that he’s too moderate for today’s GOP. “We haven’t had a right-wing nominee since Goldwater,” he says.

He knows he needs resources, of course. An advocacy group backing Kasich said Friday that it’s raised $11.5 million, a tidy sum after such a late start. But that’s hardly in the ballpark of Jeb Bush and his super PAC, which raised $114 million (albeit over a longer period of time).

I expect Kasich will get a fair hearing from the press, which likes his policy-wonk approach as well as his resume. The ex-congressman has been a House Budget Committee chairman, Fox News host and investment banker, though being with Lehman Brothers at the time of its collapse is not the most sterling credential. He was reelected governor of the quintessential swing state in a landslide last year. The question is whether he’ll do better with the pundits than the voters.

Illegal immigrants are a hot-button issue this cycle, but Kasich just says: “Are you kidding me? They have to get legalized. They have to pay a penalty.” He adds that modern technology can secure 90 percent of the border.

Asked about Donald Trump, Kasich casually notes he was one of the first to criticize the remarks on Mexican immigrants, but lets it go at that.

“Outbursts to get in the news is not the way I try to conduct myself,” says Kasich, despite the media’s well-known fondness for outbursts.

The governor allows himself a mild swipe at Hillary Clinton, saying, “She’s too small.” But in the next breath he disapproves of the smallness of the Republican campaign: “You’re not going to beat her with Benghazi or emails.”

Kasich has had the bug before. He explored a presidential campaign in 1999 but couldn’t raise much money and dropped out early. He isn’t even the only midwestern governor in the arena, with Wisconsin’s Scott Walker having just quietly announced.

What will be different this time? “You either connect with people or you don’t. You let them look into your soul and have them figure out whether you’re a good leader or not.”

Kasich makes clear he won’t run for the ego: “I don’t want to sell any books and I don’t need a TV show.” With a glance at his 15-year-old twin daughters, he says, “If I didn’t think I could win, why would I want to be away from them?”