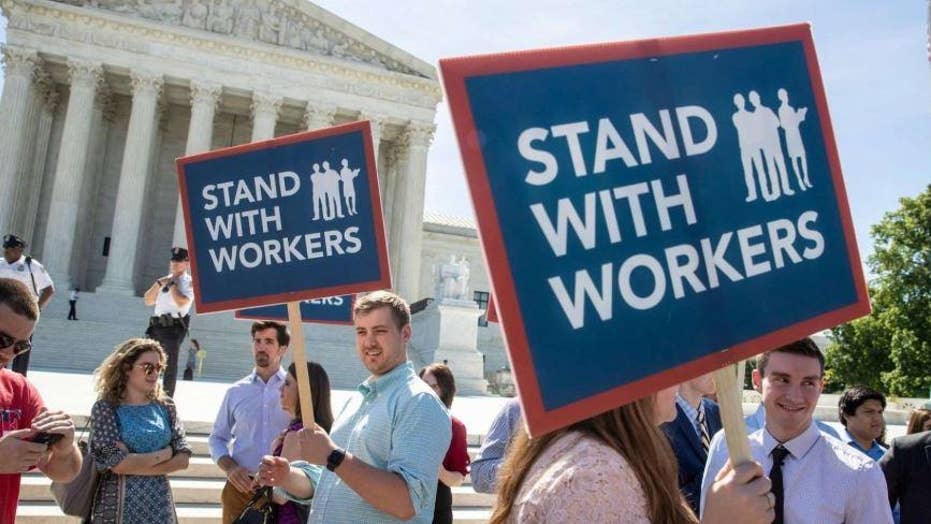 New reports reveal that government labor unions are seeing mass exodus of members for their ranks.

Two University of California system employees claim they are effectively being held "against their will" and forced to pay monthly union dues, despite a landmark Supreme Court ruling last summer barring public-sector unions from requiring nonmembers to pay so-called agency fees without their consent.

The June 2018 decision in Janus v. AFSCME sent shockwaves through organized labor, holding not only that public unions violated the First Amendment by taking money out of unwilling workers' paychecks to fund collective bargaining, but also that employees must "clearly and affirmatively consent" before any fees or dues are collected.

On May 31, 2018, according to the complaint filed Wednesday, a union representative "came to O’Callaghan’s workplace and pressured workers to join the Union," without informing O’Callaghan of the impending Janus decision. O’Callaghan, the lawsuit says, "relied on this lack of information and signed an application joining the union and authorizing it to deduct union dues from her paycheck."

Prior to Janus, the union legally could have forced O'Callaghan to pay agency fees even if she had chosen not to become a member of the union -- which, her lawyers say, made her consent invalid in the wake of the Janus decision.

On July 25, 2018, "upon learning of the Janus decision of June 27, 2018," O’Callaghan resigned from the union by letter and also wrote to UCSB requesting that it stop deducting union dues from her paycheck.

In response, O'Callaghan said, the union informed UCSB that it should continue withholding money from her paycheck, and the university complied. The union said that, under the terms of the collective bargaining agreement, O'Callaghan could eventually opt out of the fees -- she would just need to wait until around March 31, 2022.

O'Callaghan and Misraje are represented by the Liberty Justice Center (LJC), which also represented Mark Janus before the Supreme Court last year.

In addition to demanding those wages back, the lawsuit seeks to invalidate a California law requiring that government employers rely on unions to determine which employees' wages should be subjected to union donations, and that all questions about such matters be directed to unions instead of employers.

Mark Janus sued because he didn’t want a certain fee deducted from his paycheck to go toward a union just because he worked for the state. (Reuters/Leah Millis)

The lawsuit also charges that other California laws violate the plaintiffs' First Amendment rights to represent themselves in negotiations -- citing the majority opinion in Janus, which stated, “Compelling individuals to mouth support for views they find objectionable violates that cardinal constitutional command, and in most contexts, any such effort would be universally condemned.”

O'Callaghan and Misraje join a slew of plaintiffs in several states who charge that unions are either flat-out ignoring the Supreme Court's ruling, or establishing a frustrating maze of procedural roadblocks to avoid complying with it.

Neither the Teamsters nor the University of California system replied to Fox News' request for comment.

"Prior to the Janus decision, employees were given an unconstitutional choice: pay the union as a member or pay the union as a nonmember," Kristen Williamson, LJC's communications director, told Fox News. "Now that their right to choose is restored, any permission to deduct dues given before June 27, 2018, should be null and void and workers should be allowed to resign immediately."

Added Williamson: "The University of California system and Teamsters Local 2010 seem intent on holding Cara and Jenée in the union against their will. They've both made multiple requests to resign since the Janus ruling yet continue to have dues deducted from their paychecks."

LJC has filed eight cases in five states -- California, Hawaii, Illinois, New Mexico and Pennsylvania -- on behalf of workers seeking to opt out of union fees in the wake of the Janus decision. All are ongoing.

According to the latest complaint, Misraje had a similar experience as O’Callaghan, and was eventually told that she could get out of the payroll deduction only by providing written notice within a narrow "time window" that coincided with the anniversary date of her signed agreement with the union.

Experts have said Janus could end up costing unions hundreds of millions of dollars in California alone. The nation's largest union, the 3-million-member National Education Association, announced plans to cut nearly $40 million from its budget after Janus, amid fears it would lose hundreds of thousands of members.

"We're seeing huge problems across the country," Diana Rickert, the vice president of the LJC, told Fox News months after the Supreme Court's decision. "There is almost no government in America that is fully complying with the Janus ruling."