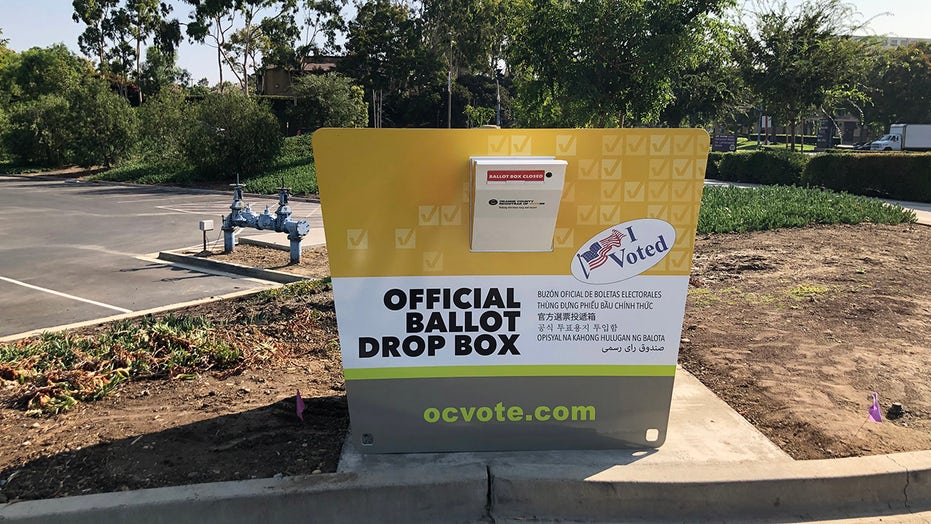 The letter comes in the wake of reports in recent weeks that unofficial ballot drop boxes have been popping up in Fresno, Orange, and Los Angeles counties. They’ve reportedly been spotted at local political party offices, candidate headquarters, and churches.

State and local election officials in California have opened an investigation in the matter, coming just a few weeks before Election Day, Fox News has confirmed.

California Secretary of State Alex Padilla said in a statement that his office is “coordinating with local officials to address the multiple reports of unauthorized ballot drop boxes.”

“Operating unofficial ballot drop boxes—especially those misrepresented as official drop boxes—is not just misleading to voters, it’s a violation of state law,” Padilla said. “This is also an important reminder. Voters are in control of how to return their ballot, and they have multiple safe and secure options for doing so. Ballots can be returned by mail, to any in-person voting location, or to an official secure drop box. Never hand your ballot over to someone you don’t trust.”

Padilla said Californians should only use official ballot drop boxes that have been deployed and secured by their county elections office. He said official county drop boxes are built with specific security protections, and ballots are retrieved only by designated county personnel.

He also directed those with questions about voting to go to official, reliable sources with county elections offices of the secretary of state’s office. Official ballot drop boxes and drop off locations can be found at caearlyvoting.sos.ca.gov.

State GOP spokesman Hector Barajas said Monday the party owns the boxes. He declined to say how many exist or where they are located. Barajas said the state's law governing so-called ballot harvesting allows an organization to collect and return groups of ballots.

"Democrats only seem to object to ballot harvesting when someone else does it," he said.

Neal Kelley, the Registrar of Voters for Orange County, shared with Fox News an image showing the “clearly recognizable” official ballot drop boxes, which are “designed to meet state standards for security, and bear the official Orange County Elections logo.”

“It's important for groups, or individuals, to understand that attempting to post or install unofficial ballot drop boxes is a violation of California law,” Kelley said, adding that voters can contact his office at 714-567-7600 to report any concerns. “It’s unclear how many voters may have used these unofficial drop boxes, however, I reacted quickly to this issue and my office has passed along reports of social media posts of unofficial drop boxes to the Secretary of State and our local District Attorney.”

The Orange County District Attorney's Office told Fox News they immediately opened an investigation into unofficial drop-off boxes found in one California congressional district, but could not confirm who might be responsible for installing them at this time. The spokeswoman said she also could not confirm the number of unofficial boxes but said law enforcement and local voting officials have been trained to spot people potentially breaking the law by promoting fake boxes, and there shouldn't be a chilling effect on voter turnout.

Unconfirmed reports have suggested California Republicans are helping to coordinate the effort to use unofficial ballot boxes. Jordan Tygh, a regional field director for the California Republican Party, received criticism after tweeting a photo of himself last Thursday kneeling and giving a thumbs-up next to a filing cabinet-sized container with a piece of paper taped to it that read: “Official Ballot Drop Off Box.”

Tygh wrote that he was “doing my part and voting early,” and had cast his ballot for Republican candidate Michelle Steel, who is running for California’s 48th congressional seat against Democratic incumbent Rep. Harley Rouda. He also told people to direct message him for "convenient locations to drop your ballot off."  The tweet has since been taken down.

Another unofficial ballot box was spotted outside Freedom's Way Baptist Church in Castaic, Calif., and the Los Angeles County Recorder/Registrar’s Office said that box did not comply with state regulations, KCBS-TV reported.

Meanwhile, the Fresno County Republican Party also posted a list of “secure” ballot collection locations on its website, but none are official county drop box sites, the Orange County Register reported. On its website, the party names its own headquarters, multiple gun shops and other local businesses as drop-off locations.