A new survey in Iowa -- the state that votes first in the presidential primary and caucus nominating calendar -- indicates South Bend, Indiana Mayor Pete Buttigieg is on the rise and within striking distance of co-front-runners former Vice President Joe Biden and Sen. Elizabeth Warren of Massachusetts.

The 37-year old mayor – the youngest candidate in the White House race -- stands at 13 percent in a Suffolk University/USA Today poll of likely Iowa caucus-goers released Monday. Biden, at 18 percent, and Warren, at 17 percent, were tied for the top spot in the survey.

Buttigieg -- who served in the U.S. Naval Reserve in the Afghanistan War and would be the nation’s first openly gay president if elected -- was up seven percentage points since the previous Suffolk University/USA Today poll in Iowa, in June.

The new poll was conducted Wednesday through Friday, entirely after last Tuesday’s fourth round Democratic presidential nomination debate. Political pundits gave a more aggressive Buttigieg high marks for taking on Warren over how she’d pay for her Medicare-for-all health care plan, targeting Rep. Tulsi Gabbard of Hawaii over her anti-interventionist stance, and clashing with former Rep. Beto O’Rourke over his mandatory gun buy back proposal. 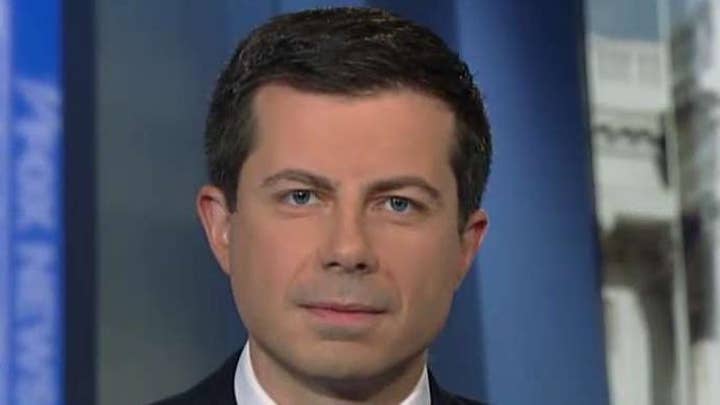 Buttigieg was followed in the poll by Sen. Bernie Sanders of Vermont, who stood at 9 percent.

Paleologos added that Buttigieg "has found a lane and is accelerating toward the front of the pack, surpassing Bernie Sanders. All of this is happening while the number of undecided voters continues to grow as Democratic caucusgoers pause to reevaluate the changing field."

The survey – which has a has a margin of error of plus or minus 4.4 points -- also indicates Sen. Kamala Harris of California plunging 13 points from the June poll, which was conducted following Harris’ strong performance in the first round of primary debates.

The poll is the second piece of evidence pointing toward a post-debate bump for Buttigieg. He also raised $1.1 million in fundraising in the first 24-hours following the debate.