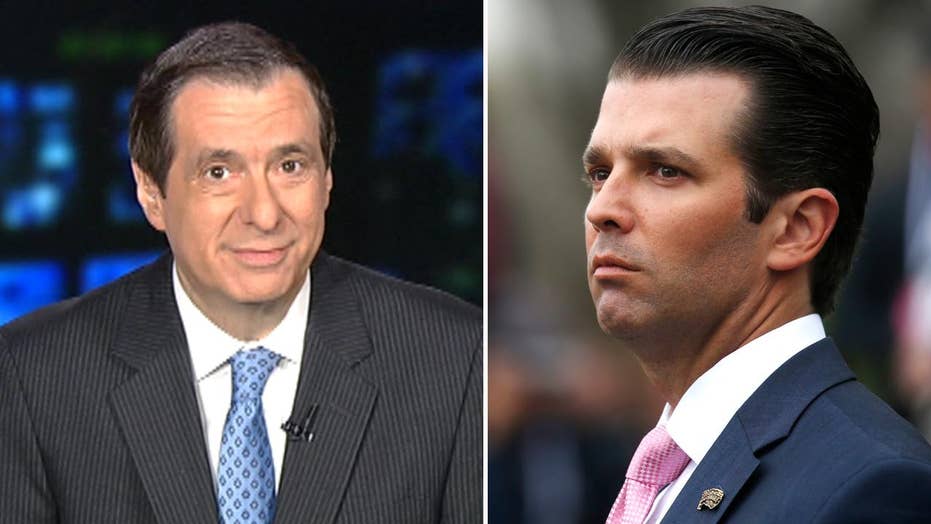 'MediaBuzz' host Howard Kurtz weighs in on the tepid media reaction to the Senate Intelligence panel releasing transcripts from the 2016 Trump Tower meeting.

Here we go again, back to the infamous Trump Tower meeting with the Russians in the summer of 2016.

And despite 2,500 pages of transcripts released yesterday by the Senate Judiciary Committee, we’re not learning very much.

Instead, the news is largely incremental, just like so many of the details of the seemingly endless Russia investigation (the Mueller probe is now officially one year old).

I'm not minimizing the importance of that meeting, which looked awful, and the administration's initially misleading explanations made it worse. But it ultimately didn't lead to anything. And the fact that the testimony of the key players doesn't shed much light on the episode tells us something about the state of these inquiries.

The same goes for MSNBC and others going wild yesterday over the president's financial disclosure form, acknowledging a $100,000-plus payment to Michael Cohen. Never mind that when Rudy Giuliani broadcast this a couple of weeks ago, it was treated as a revelation. (Yes, pundits fairly point out that Trump should have disclosed this last year.)

There was also an uproar over Giuliani telling Fox News that a sitting president can't be indicted--interesting, to be sure, but basically in line with longtime DOJ precedent.

Among the tidbits in the committee transcripts:

--Donald Trump Jr. said he did not discuss the meeting with his father, either before or afterward. He said his dad may have helped draft the initial press statement after the meeting was revealed by the New York Times, saying he "may have commented through Hope Hicks."

--Rob Goldstone, the music promoter who arranged the session between Trump Jr., Jared Kushner, Paul Manafort and Russian lawyer Natalia V. Veselnitskaya, tried to set up a second meeting months later. He got nowhere. (And he thought the original meeting was a bad idea.)

--Goldstone said he thought Veselnitskaya would deliver a "smoking gun" to the Trump campaign—the "dirt" on Hillary Clinton that had been dangled as the reason for the get-together. He said he was embarrassed when she instead made a pitch for lifting sanctions over human rights abuses, which had triggered the retaliatory end to Americans being able to adopt Russian orphans. In fact, Goldstone texted that "20 years of reputation basically destroyed by this dumb meeting."

--Don Jr. testified that "all else being equal, I wouldn't have wanted to waste 20 minutes hearing about something that I wasn't supposed to be meeting about."

--Goldstone said in an email before the session became public that Trump's lawyers were "concerned because it links Don Jr. to officials from Russia, which he has always denied meeting."

--Don Jr.'s lawyer, Alan Futerfas, tried to coordinate a press statement from three participants, telling Goldstone that "if you feel comfortable with this statement and are comfortable saying nothing more, at least for the time being, that would be our preference."

Rather underwhelming, isn't it?

The document dump comes amid bickering between Republicans on Chuck Grassley's committee, who want to wrap things up, and Democrats, who say there is more to investigate.

Also yesterday, the Senate Intelligence Committee said that U.S. officials were right about Russian meddling in 2016. "The Russian effort was extensive, sophisticated, and ordered by President Putin himself for the purpose of helping Donald Trump and hurting Hillary Clinton," said ranking Democrat Mark Warner. But we kinda knew that.

For most of the public, all this is becoming background noise. With the exception of whether President Trump will or will not sit down with Mueller, the so-called "collusion" narrative hasn't moved much in months, having been superseded by the obstruction narrative. While no one knows what the special counsel has, the media now seem to spend more time talking about Stormy and Michael Cohen's millions than whether the Trump campaign was secretly plotting with the Russians.

Perhaps the best quote was from Veselnitskaya, who complained about the "kind of apocalyptic Hollywood scenario what a private conversation between a lawyer and a businessman can be turned into."

The Trump Tower session was more than that; it was premised on dirt-digging that didn’t pan out. But it is, by now, old news, and these investigations increasingly have that feel as well.