Sara Carter: Children as young as 8 years old sold into prostitution at border

The Biden administration has been facing a continuing crisis at the southern border after taking office in January, and so far there are few signs of it slowing down significantly – with the number of migrants and seizures of the deadly drug fentanyl continuing to rise.

The Biden administration has noted that 112,302 mostly single adults were expelled via Title 42 public health restrictions due to the COVID-19 pandemic, and so the numbers of migrants making multiple efforts into the U.S. may have increased. However, Homeland Security Secretary Alejandro Mayorkas has left open the possibility of ending Title 42 restrictions once the risk of the pandemic subsides – and is under pressure from the Democratic Party’s left flank to do so.

Meanwhile, images have continued to surface of unaccompanied children – who the Biden administration is not removing via Title 42 – being dumped at the border by smugglers and left to fend for themselves.

Drug seizures overall are up by 18 percent in May from April 2021. While that number is actually lower overall compared to May 2020 and a number of other months in both FY 2020 and 2021, seizures of the deadly drug fentanyl are up by more than 300% over May last year.

Fentanyl, an opioid for pain treatment, is between 50 and 100 times more potent than morphine. More than 36,000 people died from overdoses involving synthetic opioids like fentanyl in 2019, according to the CDC.

As more migrants come to the border, it is leaving more becoming stranded in the wilderness and the increasing heat. Agents have encountered U-Hauls packed with migrants with temperatures of more than 100 degrees.

Meanwhile at the border itself, CBP conducted 7,084 rescues nationwide, and CBP has rescued 35 percent more individuals in FY 2021 than all of FY 2020.

A pair of migrant families from Brazil pass through a gap in the border wall to reach the United States after crossing from Mexico in Yuma, Ariz., Thursday, June 10, 2021, to seek asylum.  The families are part of an influx of asylum-seekers entering the U.S. in the Yuma area from South America and other continents. (AP Photo/Eugene Garcia) (AP Photo/Eugene Garcia)

One statistic that suggests some let up for the administration is in the number of unaccompanied children coming across the border, which has decreased from record highs in March to about 10,000 in the month of May.

Officials have also pointed to the decrease of children in Border Patrol custody, while the 16,000 migrant children currently in Health and Human Services (HHS) custody is lower than the 22,000 in custody last month – although that is not due to the children not being removed, but being united with sponsors across the country. That move has led to pushback from Republicans.

Republicans have blamed the surge in migration and smuggling activity on the Biden administration’s policies – including the ending of the Migrant Protection Protocols (MPP) and border wall construction, as well as a narrowing of interior enforcement.

The Biden administration has downplayed the effect of policies, instead focusing on the "root causes" of the crisis in Central America like violence, poverty, crime and climate change. Vice President Kamala Harris recently visited Guatemala and Mexico as part of that strategy and announced a slew of efforts to help those countries, but warned that change won’t happen quickly.

"So this is some of the work we have done, the issues that our longstanding, by virtue of the nature of them, are never going to be solved overnight," she said while on the trip. "But it is important that we make progress and I remain optimistic about the potential for that progress.

Mayorkas testified to House lawmakers this week that a budget request that includes money for immigration backlogs and better technology at ports of entry will help fund the strategy. He noted that the request did not include funding for more wall construction at the border, while taking criticism from Republicans for not funding additional Border Patrol agents. 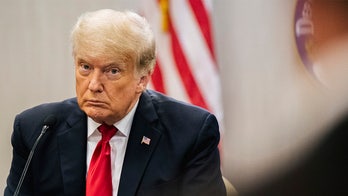