Expectations and objections for the Trump-Putin summit

Insight from Jonathan Swan, who covers the White House for Axios, and Michael Gordon, national security correspondent for the Wall Street Journal.

President Trump’s national security adviser John Bolton said the recent charges against 12 Russian military intelligence officials in connection to the hacking of Democratic targets in the 2016 presidential election gives the president the upper hand when he meets with Russian President Vladimir Putin in Finland on Monday.

In an interview on ABC’s “This Week,” Bolton said the indictments show that the American justice system is aware of Russian efforts to meddle in U.S. elections and that Trump’s summit with Putin allows the president to tell the Russian leader that "this is a serious matter that we need to talk about."

“I think the president can put this on table and say this a serious matter and we need to talk about it,” Bolton said.

The indictment announced Friday said the Russians hacked into Hillary Clinton's presidential campaign and the Democratic Party and released tens of thousands of private communications as part of a broad conspiracy by the Kremlin to meddle in an American election that ended up putting Trump in the White House.

Trump and Putin have met twice before, during international summits last year in Germany and Vietnam. (AP)

Trump on Saturday tweeted that the Obama administration for not responding aggressively enough to Russian hacking.

“The stories you heard about the 12 Russians yesterday took place during the Obama Administration, not the Trump Administration,” Trump tweeted. “Why didn’t they do something about it, especially when it was reported that President Obama was informed by the FBI in September, before the Election?”

Congressional Democrats and at least one Republican have called on the president to pull out of the meeting unless he is willing to make Russian election-meddling a top issue for the summit.

While Trump said "certainly I'll be asking about it,” Bolton said during his appearance on “This Week” said that it is impossible for the U.S. to do so as Washington has no extradition treaty with Moscow and can't compel Russia to hand over citizens. A provision in Russia's constitution also prohibits extraditing its citizens to foreign countries.

“I’ll give them the benefit of the doubt and assume none of them are lawyers,” Bolton said of the Democrats. “The U.S. does not have an extradition treaty with Russia so it’s hard to imagine how this would happen.” 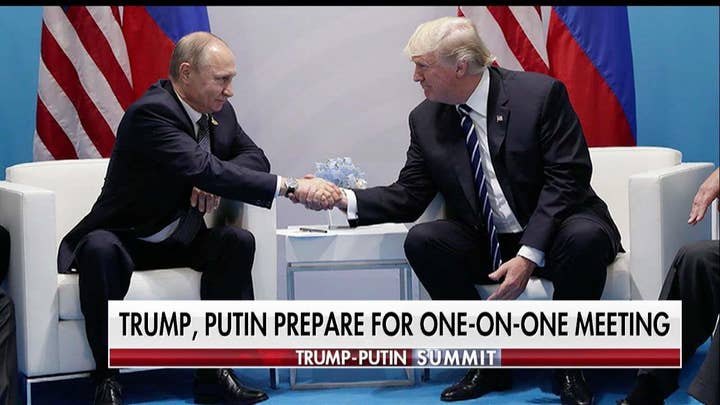 Bolton added that - despite recent meetings with Putin and denials by the Russian leader that Moscow has anything to do with the hacking – the national security advisor said he finds it "hard to believe" that the Russian intelligence officials could conduct such an operation without Putin's knowledge.

Trump and Putin have met twice before, during international summits last year in Germany and Vietnam. But Jon Huntsman, the U.S. ambassador to Russia, says Monday's meeting "is really the first time for both presidents to actually sit across the table and have a conversation and I hope it's a detailed conversation about where we might be able to find some overlapping and shared interests."

"The collective blood pressure between the United States and Russia is off-the-charts high so it's a good thing these presidents are getting together," he added.