Kurtz: Why president and Acosta both benefit from legal clash

'MediaBuzz' host Howard Kurtz weighs in on why CNN's lawsuit against Trump is more about a PR battle than the law.

Bob Woodward, the Pulitzer Prize-winning Watergate journalist whose recent book, "Fear," described chaotic infighting at the White House, on Tuesday criticized CNN for filing a lawsuit against the Trump administration and charged that too many media figures "have become emotionally unhinged."

CNN filed a federal lawsuit against the Trump administration on Tuesday demanding that the White House restore the press credential of star reporter Jim Acosta. The administration suspended Acosta's "hard pass," which provided expedited access to the White House grounds, after he broke protocol by refusing to surrender his microphone during a press conference last week.

Acosta continued to pepper Trump with a barrage of declarative statements and questions -- at times talking over Trump -- until the president stepped away from the podium, even though reporters are typically afforded just one follow-up.

“In the news media there has been an emotional reaction to Trump,” Woodward said. “Too many people for Trump or against Trump have become emotionally unhinged about this.”

Woodward added that CNN was taking Trump's "bait" by enlisting high-profile lawyer Ted Olson to pursue a federal case. "This is a negative," Woodward said. "Trump is sitting around saying, ‘This is great.'”

That sentiment was echoed in a piece in Rolling Stone on Tuesday by Ryan Bort titled, "CNN Has Played Right Into Trump's Hands."

"Too many people for Trump or against Trump have become emotionally unhinged."

JUDGE NAP: CNN HAS A GOOD CASE AGAINST TRUMP ADMINISTRATION

(Trump fiercely criticized Woodward after his book released earlier this year, saying "he’s had a lot of credibility problems.")

CNN's suit alleges that the White House violated Acosta's First and Fifth Amendment rights by punishing him for the content of his speech without providing notice or any due process, although the White House maintains that Acosta was penalized solely because of his behavior.

None of CNN's approximately 50 other "hard pass" holders has lost White House access, nor have reporters belonging to any other liberal-leaning media outlet -- although Trump has suggested that may change.

At the testy press conference the day after last week's midterm elections, Acosta continued to shout questions at Trump even after he tried to move on to another reporter, and he refused to hand the microphone to an intern who tried to retrieve it.

The litigation filed by CNN, which does not fully describe Acosta's actions during the press conference and contains several substantive factual inaccuracies, also asserts that the Secret Service violated the Administrative Procedures Act by taking a final agency action in penalizing Acosta without providing any notice or hearing.

The suit, in arguing that the White House was lying about its motivations for taking action against Acosta, additionally claims that White House Press Secretary Sarah Sanders shared a "doctored" clip of the episode on Twitter. In the low-resolution .GIF clip shared by Sanders, Acosta's arm moves slightly faster than it does in higher-quality footage of the press conference, appearing to show him more forcefully striking the intern's arm as she tries to take the microphone from him.

However, despite reporting from a wide variety of outlets that Sanders had shared a doctored clip, a Buzzfeed analysis suggested the changes in the video could have resulted inadvertently from the conversion of the footage to the lower-fidelity .GIF format, which is commonly used on Twitter. The format produces fewer frames per second than a higher-quality video source, making scenes appear to move faster.

White House officials, including Trump adviser Kellyanne Conway, have acknowledged that the video was indeed "sped up" during the conversion process, while consistently denying that the clip was purposefully doctored. 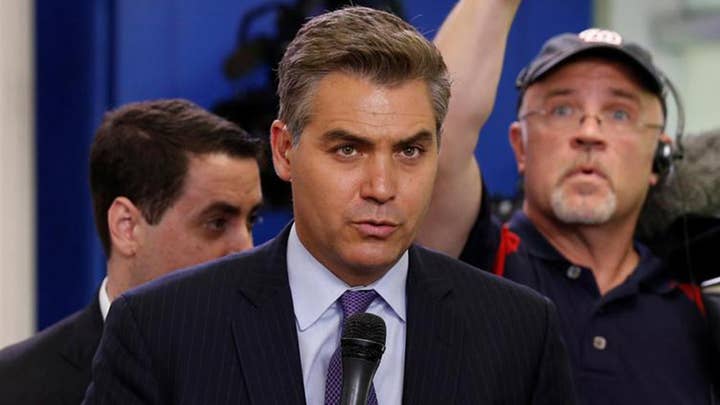 The lawsuit states that Sanders used a bogus justification by claiming that Acosta had "placed his hands on a young woman just trying to do her job as White House intern."

In responding to CNN's suit, Sanders on Tuesday said that Acosta's behavior had "impeded the ability of the President, the White House staff, and members of the media to conduct business.”

"After Mr. Acosta asked the President two questions—each of which the President answered—he physically refused to surrender a White House microphone to an intern, so that other reporters might ask their questions," Sanders said in statement.

"This was not the first time this reporter has inappropriately refused to yield to other reporters," she continued. "The White House cannot run an orderly and fair press conference when a reporter acts this way, which is neither appropriate nor professional. The First Amendment is not served when a single reporter, of more than 150 present, attempts to monopolize the floor."