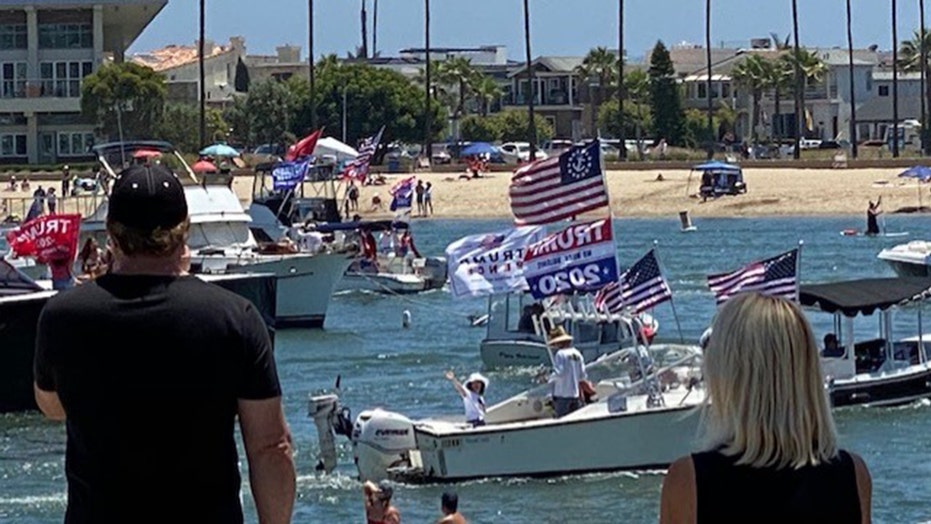 Boat owners took to the Bogue Sound near Beaufort, N.C., Saturday in a show of support for President Trump.

Videos obtained by ABC 11 showed hundreds of boats lining the Bogue Sound waving flags in support of the president on the same day as his first rally since early March in Tulsa, Okla.

According to the Coast Guard, somewhere between 1,500 and 2,000 boats showed up in support.

Boat owners have assembled off coasts across the country in support of the president since the coronavirus pandemic put a pause on in-person gatherings.

A similar gathering was seen off the coast of New Smyrna Beach in Florida.

The show of support came as the president’s rally in Tulsa attracted an attendance under capacity.

Top Democrats had gloated that teenage activists had sabotaged turnout at Trump’s rally and within hours the Trump campaign fired back, saying that media organizations are complicit in spreading false narratives about the event – and that protesters and the coronavirus were the real culprits.

Brad Parscale, Trump's campaign manager, on Sunday, countered by explaining the campaign's process for screening out false ticket requests, which was implemented after activists made similar efforts to derail previous rallies.

“Leftists and online trolls doing a victory lap, thinking they somehow impacted rally attendance, don’t know what they’re talking about or how our rallies work," Parscale said. "Reporters who wrote gleefully about TikTok and K-Pop [Korean pop music] fans – without contacting the campaign for comment – behaved unprofessionally and were willing dupes to the charade."