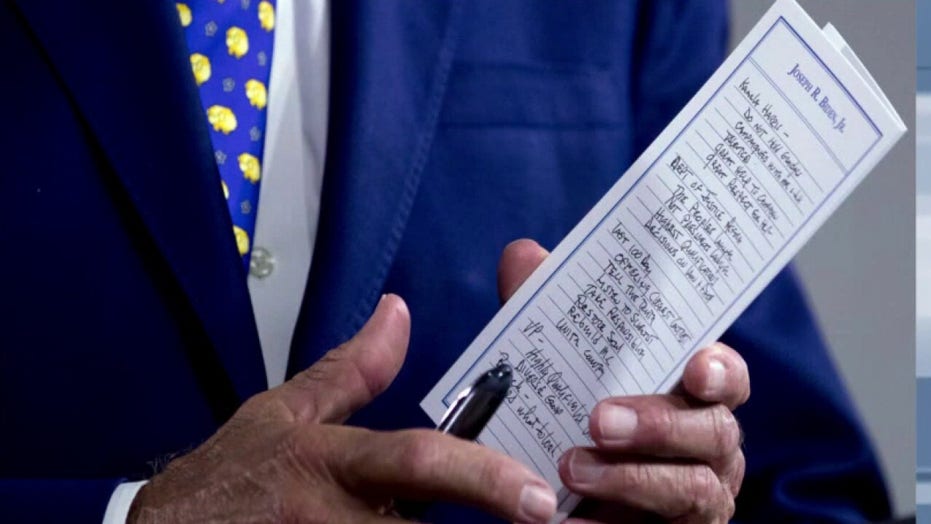 Presumptive Democratic presidential nominee Joe Biden has kept quiet on who he is going to pick to be his running mate, but a mistaken report by Politico and a photo of his notes captured by an Associated Press photographer on Tuesday has many suspecting his top candidate for the job is Sen. Kamala Harris, D-Calif.

"Joe Biden chose Kamala Harris to become his running mate for the 2020 election on Aug. 1, two weeks before the Democratic National Convention, after keeping his choice close to the chest for months," Politico wrote.

Though the outlet removed the story and issued an apology, saying to Fox News Tuesday night that they regretted the “error and any confusion that is caused,” an AP story released that same evening reported something similar.

The AP photographer grabbed a shot of Biden’s handwritten notes showing a section titled “Kamala Harris,” which was followed by a list of attributes.

“Do not hold grudges.” “Campaigned with me & Jill.” “Talented.” “Great help to campaign.” “Great respect for her.”

Harris, a presidential candidate before dropping out in 2019, has endorsed and campaigned for Biden since March. But she once was one of his most ardent opponents on the campaign trail, criticizing his stance on busing for school integration in the 1970s.

“Do you agree today that you were wrong to oppose busing in America?” Harris asked Biden on a debate stage in Miami in June 2019.

Biden, the vice president to Barack Obama, the first Black president in U.S. history, angrily said her comments were “a mischaracterization” of his position.

BIDEN CAMPAIGN OFFICIAL DISMISSES REPORT OF RIFT WITH HARRIS: 'DON'T BELIEVE EVERYTHING THAT YOU READ'

“There are moments in history where states fail to support the civil rights of people,” Harris responded.

Harris and Biden’s relationship has become amicable since, and in a CBS interview shortly after the debate last year she said that she still had a “great deal of respect” for him.

Biden has also publicly commended Harris and noted that he had a personal and professional admiration for the senator, who had a close friendship with his late son Beau Biden when they were both state prosecutors.

"I'm not good at keeping hard feelings," Biden said in December after Harris dropped out.

“Senator Harris has the capacity to be anything she wants to be,” he added.

Joseph Wulfsohn and the Associated Press contributed to this report.