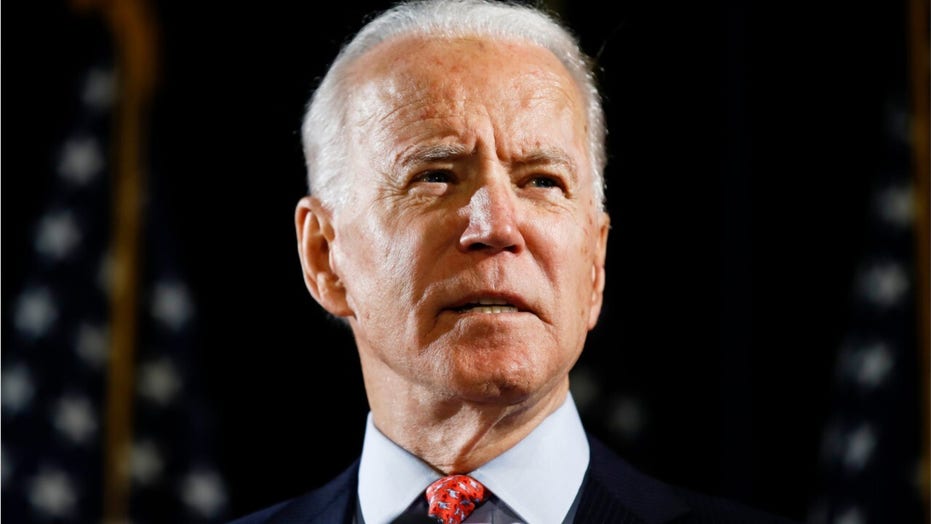 "No more, no new fracking."

Those five words spoken by former Vice President Joe Biden during Sunday night's Democratic presidential debate brought on renewed attacks against him from the left -- namely Bernie Sanders endorser Rep. Alexandria Ocasio-Cortez, D-N.Y. -- as well as from the right.

And the pushback on the primary front-runner's fracking statement was particularly stiff in his natural gas–reliant home state of Pennsylvania.

"The calls for a moratorium on fracking by presidential candidates are misguided and show no understanding of where energy and important consumer and medical products come from, and how important they are to our lives," Pennsylvania Independent Oil & Gas Association President Daniel J. Weaver said in a statement to Fox News.

From the left, Ocasio-Cortez criticized Biden on Twitter overnight for not calling for an outright ban on fracking, but seemingly trying to make it sound like he is.

"Don't say you support a fracking ban when you don't," Ocasio-Cortez said. "This is basic. The truth matters."

The fracking issue is just a snapshot of the political balancing act facing Biden as he tries to unite the Democratic Party -- including ardent Sanders supporters -- while also appealing to moderates and winning in Rust Belt states like Pennsylvania that went for Trump in 2016.

While Biden does not call for an outright ban on fracking like Sanders does, he does advocate, on his campaign website, "banning new oil and gas permitting on public lands and waters." Fox News reached out to the Biden campaign for comment and to clarify that his Sunday statement did not signify a policy shift but did not immediately receive a response. The Washington Examiner, however, reported that the campaign asserted that Biden was simply stating what has been his policy all along.

ED ROLLINS: DEMOCRATIC DEBATE A SNOOZER FULL OF PANDERING AT A TIME WHEN NATION NEEDS THIS

While the RealClearPolitics average of polls shows Biden beating Trump head-to-head in Pennsylvania in the general election, any restrictions on fracking are unlikely to be popular in states like Pennsylvania, which Biden, if he secures the Democratic presidential nomination, would consider critical in November.

"There is nothing ‘moderate’ about Vice President Biden’s plan to curb and eventually eliminate fracking. It’s just a ban by another name," Sen. Pat Toomey, R-Pa., said in a statement to Fox News on Monday.

BIDEN UP 20 POINTS OVER SANDERS IN ARIZONA ON EVE OF PRESIDENTIAL PRIMARY: POLL

He added: "The end result of the plans offered by Vice President Biden and Senator Sanders is the same: devastation for Pennsylvania’s economy, tens of thousands of workers losing their jobs, higher home heating costs for Pennsylvania families, higher CO2 emissions, and our trading partners switching to coal for electricity production or depending on hostile authoritarian regimes, like Russia’s, for natural gas."

"Vice President Biden and Senator Sanders’ continued absurd and dangerous attack on fracking shows they are not only out of touch with reality, but out of touch with hardworking Americans who have benefited from our robust energy economy," Keller said Monday. "Proposals like this would eliminate hundreds of thousands of good-paying blue collar jobs and guarantee that Donald Trump wins states like Pennsylvania and ultimately the presidency."

BIDEN'S CONCESSIONS: HOW EX-VP HAS SHIFTED COURSE IN BID TO WOO LEFT

Biden, for his part, has touted his climate record as a member of the Obama administration in pleas for Democrats to back a candidate with a proven record of getting environmental reforms done as he makes his pitch to be the sensible, effective choice in the primary.

"$90 billion in clean energy funding. A huge reduction in the cost of solar so that we'll never build another coal plant again," Biden tweeted Sunday night. "I did that. Bernie watched."

Several large states including Florida are expected to vote Tuesday as Biden looks to grow his lead in the primary race, which has only become larger since his romp on Super Tuesday that saw him take wins in 10 different states. Pennsylvania, along with five other states in the mid-Atlantic and Northeast, are scheduled to vote in the Democratic primary on April 28, but it is unclear whether they will be forced to move back their elections because of the coronavirus pandemic.