President Biden, closing in on two years in office, has yet to visit the overwhelmed southern border despite an ongoing migrant crisis — and is facing renewed calls from Republicans for him to do so just as the White House deals with a controversy over its claim that illegal immigrants are not just "walking" across.

Republicans and Border Patrol agents were outraged when the White House challenged the statement that someone who walks into Texas or Arizona unvaccinated is allowed to stay in the U.S.

"But that's not how it works," White House press secretary Karine Jean-Pierre said at a press briefing on Monday when asked by Fox News’ Peter Doocy.

"That's what's happening," Doocy said. "I know that's not what you guys want to happen. But that is what is happening."

"But that's not — it's not like somebody walks over," Jean-Pierre responded. She later said "It is not that simple. It’s not just that people are walking across the border."

Biden has made a number of trips recently, including to Pennsylvania, Kentucky, South Carolina and Israel. However, in 18 months of being president, he has not yet visited the southern border, which saw more than 1.7 million migrant encounters last fiscal year and more than two million this fiscal year to date.

To Biden’s Republican critics, the denial by Jean-Pierre of something seen at the border every day was the latest indicator that the administration is woefully out of touch with the crisis at the border.

"The White House is shamelessly denying the fact that illegal immigrants are crossing our southern border," the House Republican caucus tweeted. "President Biden should actually visit the southern border to witness the chaos created by his failed policies."

"The White House doesn't know how the border crisis 'works' because none of them have been there," Rep. August Pfluger, R-Texas, who sits on the House Homeland Security Committee, tweeted. "It's past time for @POTUS and his out-of-touch staff to see the crisis for themselves."

Republican National Committee Chair Ronna McDaniel tweeted that "Biden says he doesn’t have time to visit the border… He has spent 234 days on vacation since taking office."

The White House did not respond to a request for comment from Fox News Digital about whether a plan for Biden to visit the border is in the works.

The border crisis escalated dramatically shortly after Biden entered office. Critics have attributed the surge in numbers — which soon hit 150,000 encounters a month in mid-2021 and are now around 200,000 a month — to the rollback of Trump-era policies.

BORDER PATROL APPREHENDS GROUP OF 100 MIGRANTS IN CALIFORNIA, MOST FROM 12 COUNTRIES OTHER THAN MEXICO 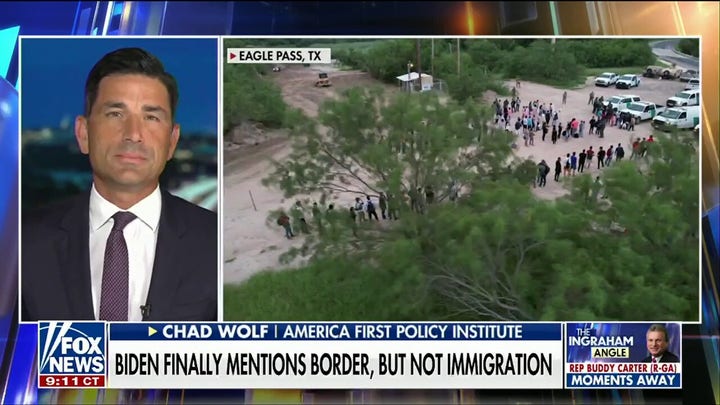 The administration ended the Migrant Protection Protocols, which kept migrants in Mexico for their asylum hearings, ended border wall construction and dramatically narrowed interior enforcement. It has also sought to end expulsions under the Title 42 public health order.

Instead, the Biden administration has focused on what it sees as the "root causes" of the crisis, including poverty, climate change, violence and corruption in Central America. It has also launched an anti-smuggling campaign and has recently touted the more than 3,000 arrests that campaign achieved, as well as agreements with Western Hemisphere countries and increased funding for the Department of Homeland Security.

"We have a plan in place. This is not like switching the lights on. Right?" Jean-Pierre said Monday. "This is going to take a process. We are fixing a broken system that was actually left by the last administration."

Vice President Kamala Harris was tasked last year with leading the talks with foreign leaders to deal with the root causes and visited the border in the summer of 2021. Republican critics have also noted that she has not returned since.

On Wednesday, Jean-Pierre sought to clarify her remarks, outlining the process by which migrants are taken into Border Patrol custody and either expelled under Title 42, transferred to Immigration and Customs Enforcement or processed into the country.

"That is how it works. That is the process that we are taking," she said.