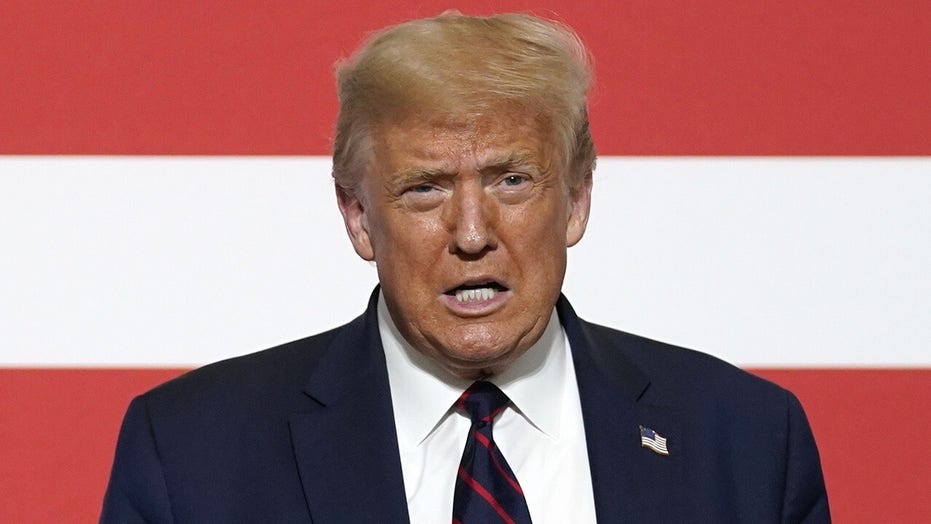 President Trump reacts on 'Fox &amp; Friends' to allies of Joe Biden suggesting he should not participate in the presidential debates.

"Come on, man. That's like saying you, before you got on this program, you take a test where you're taking cocaine or not. What do you think? Huh? Are you a junkie?" the former vice president shot back, turning the question back around on CBS News reporter Errol Barnett, who is Black. The former vice president chuckled as he finished his response.

Trump campaign rapid response director Andrew Clark – in an email to reporters and in a tweet – quickly highlighted Biden’s response, which he described as “Brutal.”

At a news conference in June, when Fox News’ Doug McKelway asked if he’d been tested for his mental acuity, Biden responded that he’s "been tested and I'm constantly tested.” Biden's advisers later clarified that the former vice president was referring to the everyday rigors of a presidential general election campaign.

For months, the president and his allies have pointed to Biden’s verbal gaffes and questioned whether he’s lost his mental sharpness and whether the former vice president has the stamina to serve as the nation’s commander in chief.

The president in May charged that Biden’s “not mentally sharp enough to be president” and that the former vice president “doesn't know he's alive,” in an interview with WJLA-TV.

And during a June interview with Fox News, Trump claimed that “Joe’s not all there. Everybody knows it. And it’s sad when you look at it and you see it.”

AMERICANS DIVIDED ON WHO'S MORE MENTALLY FIT TO SERVE AS PRESIDENT: POLL

But a national poll conducted earlier this summer suggested that slightly more Americans are confident of Biden’s mental and physical abilities than of the 74-year-old president’s capabilities. According to a Monmouth University survey released a month ago, 52 percent of registered voters questioned said they’re at least somewhat confident that Biden has the mental and physical stamina to carry out the extremely demanding job of president. Only 45 percent said the same thing about Trump.

However, a third of those questioned said they were very confident that the president has the mental and physical fitness to carry out his job, compared with 23 percent for the presumptive Democratic presidential nominee.

The 74-year old Trump last month defended his own mental fitness and claimed that he had “very recently” taken a cognitive test at Walter Reed Medical Center and boasted that he had “aced” it.

“I actually took one very recently,” Trump disclosed in an interview with Fox News’ Sean Hannity. “I aced it, I aced the test.”

“I took it at Walter Reed Medical Center in front of doctors and they were very surprised. They said, 'That’s an unbelievable thing, rarely does anybody do what you just did,'” the president elaborated. But Trump did not provide a specific date that he took the test.

The president added that Biden “should take the same test” that he did.

Asked what he would say to a president who brags about his own cognitive test, Biden responded: “If he can’t figure out the difference between an elephant and a lion, I don’t know what the hell he’s talking about.”

Biden also emphasized that he’s looking forward to debating the president. The former vice president's comments come in the wake of a flurry of reports speculating that some Democrats are trying to persuade Biden not to debate Trump.

The Biden campaign has repeatedly committed to the three debates laid out by the Commission on Presidential Debates (CPD), which are scheduled for Sept. 29, Oct. 15, and Oct. 22.

Biden’s wife, former second lady Jill Biden – when asked Tuesday on Fox News’ "The Daily Briefing with Dana Perino" whether her husband would take part in the three debates – answered, “Oh yes, he will. I think they've said that already.”

And Monday, in an appearance on Fox News’ "America’s Newsroom," Biden deputy campaign manager Kate Bedingfield said “there is one candidate in this race who has agreed to three debates and that’s Joe Biden.”

Trump campaign director of press communications Erin Perrine appeared to become the first Trump campaign spokesperson to say on the record that the president has agreed to the three debates when she said on Fox News’ "America’s Newsroom" that “yes, we have agreed with the debate commission.”

After Fox News followed up with the Trump campaign, a re-election official said “we want those three debates and another one earlier than those.”

The Trump campaign’s repeatedly pushed for extra showdowns with Biden – and for the debates to start earlier than Sept. 29, arguing that by that date voters in roughly 15 states will have already received absentee ballots and that in-person early voting will have already begun in a handful of states.

The debates are being scheduled by the CPD for roughly the same time period they were held in the 2012 and 2016 presidential election cycles, when early voting and absentee voting had also begun in some states.