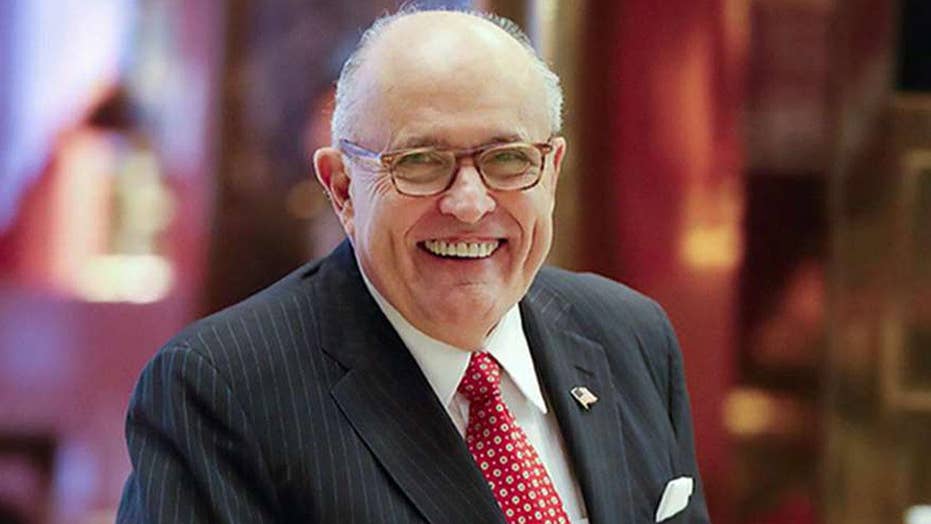 The Biden campaign wrote to NBC News, CBS News, Fox News and CNN to voice "grave concern that you continue to book Rudy Giuliani on your air to spread false, debunked conspiracy theories on behalf of Donald Trump," according to The Daily Beast, which first reported the existence of the letter.

The memo, drafted by Biden aides Kate Bedingfield and Anita Dunn, continued: "While you often fact check his statements in real time during your discussions, that is no longer enough. By giving him your air time, you are allowing him to introduce increasingly unhinged, unfounded and desperate lies into the national conversation."

Should a network choose to book Giuliani, the Biden campaign called for "an equivalent amount of time" to be provided "to a surrogate for the Biden campaign." The letter noted Giuliani was not a public official, but Trump's lawyer and personal advisor.

Responding to the request, Trump 2020 campaign manager Brad Parscale tweeted: "Can we request the removal of Democrats on TV that push hoaxes? Wait, but then who would do the interviews?"

Hours earlier, Giuliani made the rounds on several Sunday shows, including "Fox News Sunday," to argue that evidence of Biden's possible corruption has been hiding in plain sight for months.

Biden has acknowledged on camera that, when he was vice president, he successfully pressured Ukraine to fire that prosecutor, Viktor Shokin, who was investigating the natural gas firm Burisma Holdings — where son Hunter Biden had a highly lucrative role on the board paying him tens of thousands of dollars per month, despite limited relevant expertise. The vice president threatened to withhold $1 billion in critical U.S. aid if Shokin was not fired. 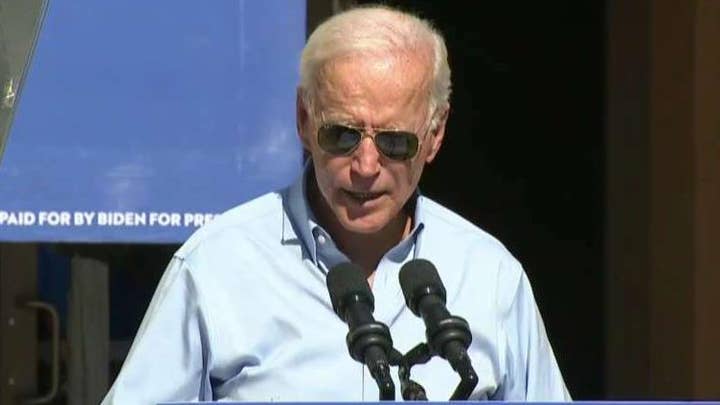 Shokin himself had been widely accused of corruption, while critics charged that Hunter Biden essentially might have been selling access to his father, who had pushed Ukraine to increase its natural gas production. Giuliani, on Sunday, suggested Shokin was the target of an international smear campaign to discredit his work.

In a combative interview on ABC News' "This Week" on Sunday, Giuliani presented what he said was an affidavit signed by Shokin that confirmed Hunter Biden was being investigated when Shokin was fired.

"The Washington press will not accept the fact that Joe Biden might have done something like this."

"I have an affidavit here that's been online for six months that nobody bothered to read from the gentleman who was fired, Viktor Shokin, the so-called corrupt prosecutor," Giuliani said. "The Biden people say that he wasn't investigating Hunter Biden at the time. He says under oath that he was." The Shokin affidavit purportedly said the U.S. had pressured him into resigning because he was unwilling to drop the case.

After anchor George Stephanopoulos expressed skepticism, Giuliani fired back: "How about if I -- how about if I tell you over the next week four more of these will come out from four other prosecutors? ... No, no, no, George, they won’t be [investigated], because they’ve been online for six months, and the Washington press will not accept the fact that Joe Biden might have done something like this." 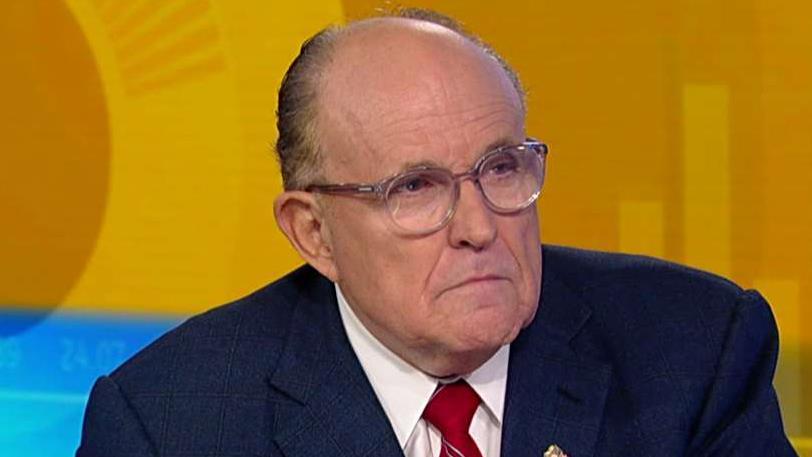 Personal attorney to President Trump Rudy Giuliani says if he is called to testify he will take that up with his client.

When Stephanopoulos called it "not true" that Hunter Biden had taken more than $1 billion from China while the U.S. was negotiating with the country, Giuliani again said the former Clinton administration official was being too dismissive.

Giuliani went on: "Can I -- can I make a contrast? Can I just make a slight contrast with the so-called whistleblower? The whistleblower says I don’t have any direct knowledge, I just heard things. Up until two weeks before he did that, that wouldn't even [have] been a complaint, would have been dismissed."

But, that admonition was removed sometime afterward -- around the time that an unnamed whistleblower filed a complaint, based on secondhand information, alleging misconduct in the White House. Although there has been no strict legal requirement for whistleblower complaints to contain only firsthand information, the previous intelligence community form made it clear that such secondhand complaints would not be investigated as a matter of procedure.

Trump and top Republicans called for answers over the weekend as to when and why the form was changed -- and whether the change was made specifically to allow the whistleblower's complaint to proceed.

Before Giuliani's interview, former Trump Homeland Security Advisor Thomas Bossert criticized Trump's communications with Ukraine, but said he did not see any evidence of an impeachable offense. Giuliani said Bossert was wrong to imply that Giuliani had ever alleged Ukraine directly participated in the hacking of Democrats' servers in 2016.

“The pattern is a pattern of pay for play. It includes something very similar to what happened to the Clinton Foundation," Giuliani said, "which goes to the very core of, what did Obama know and when did he know it?"

Giuliani referred to a December 2015 New York Times article about Hunter Biden, Burisma and a Ukrainian oligarch, and how the younger Biden's involvement with the Ukrainian company could undermine then-Vice President Biden's anti-corruption message.

"The question is," Giuliani asked, "when Biden and Obama saw that article, about how the son was pulling down money from the most crooked oligarch in Russia, did Obama call Biden in and say 'Joe, how could you be doing this?'" 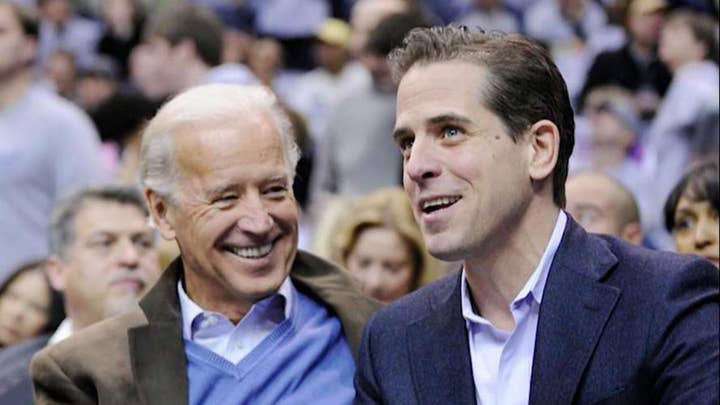 Giuliani was not the only attorney trying to get damaging information on Joe Biden from Ukrainian officials, and President Trump’s decision to withhold aid from Ukraine this summer was made in spite of several federal agencies supporting the aid, Fox News’ Chris Wallace reported on "Fox News Sunday."

In addition to Giuliani, Washington, D.C., lawyers Joe DiGenova and his wife, Victoria Toensing, worked alongside the former New York City mayor. According to a top U.S. official, the three attorneys were working "off the books" -- not within the Trump administration -- and only the president knows the details of their work.

In a tweet Sunday, Toensing called the report "false" and embarrassing." Wallace, in a statement, responded, "We stand by our reporting."

For his part, Giuliani insisted he "didn't work with anybody to get dirt on Joe Biden," again saying that the information "was handed to me by the Ukrainians."

Democrats have focused on the whistleblower's complaint, released last week, which cited information from White House officials who alleged there'd been efforts to secure Trump's July phone call with Ukrainian President Volodymyr Zelensky, among other conversations. The Trump administration reportedly began placing transcripts of Trump's calls with several foreign leaders in a highly classified repository only after anonymous leakers publicly divulged the contents of Trump's private calls with the leaders of Mexico and Australia in 2017.

Trump suggested during a phone call with Zelensky that Ukraine look into Biden's boast about firing Shokin, after Zelensky first mentioned Ukraine's corruption issues, and after Trump separately requested as a "favor" that Ukraine help investigate foreign interference in the 2016 elections, including the hack of the Democratic National Committee (DNC) server involving CrowdStrike.

The call came not long after Trump had frozen millions of dollars in military aid to Ukraine. However, the U.S. later released the aid to Ukraine, and the Ukrainians were unaware the money was frozen in the first place until more than a month after Trump's call with Zelensky, The New York Times reported.

Zelensky has said he felt no pressure from Trump during the phone call to do anything.

The whistleblower complaint contained several apparent factual inaccuracies, prompting some Republicans to call for an inquiry into the whistleblowers' sources -- and why they didn't make the complaint themselves.