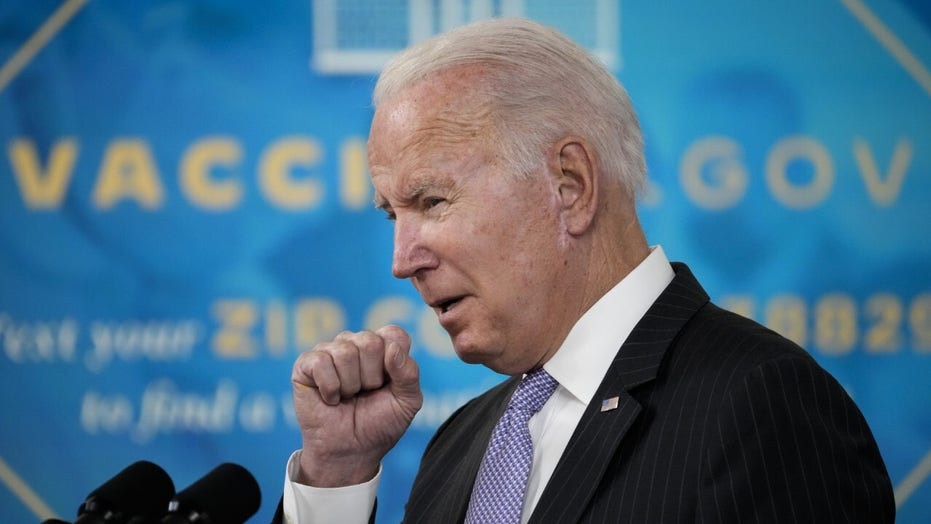 President Biden’s broken promises on getting the coronavirus pandemic under control have come into full view as he wraps up his first year in office and the omicron variant continues its sweep across the country.

While Biden has seen tanking approval ratings on issues like the economy and inflation, he has typically enjoyed higher numbers on his handling of COVID-19, but that, too, has dropped over the course of the past year. According to a new ABC News/Ipsos poll, 53% approve of Biden’s response to the coronavirus, down from 69% when he first took office, with a considerable drop among independents.

President Biden and the White House COVID-19 Response Team participate in a virtual call with the National Governors Association from the South Court Auditorium of the Eisenhower Executive Office Building of the White House Complex on Monday, Dec. 27, 2021 in Washington. (Kent Nishimura / Los Angeles Times via Getty Images)

The drop comes as the White House tries to shift its messaging around the coronavirus to focus on hospitalizations and deaths instead of the number of cases. The seven-day rolling average of new COVID-19 cases was 193,002 new cases per day when Biden took office on Jan. 20. That number decreased in the summer but ballooned to 240,408 new cases per day on Monday, the highest average reached under the Biden Administration.

"This is a really tough time in our country," she said. "We’re still battling COVID and a lot of people thought we’d be through it, including us."

Biden, who recently said "the single greatest currency you have is your word," made big promises regarding COVID-19 on the campaign trail that have yet to come to fruition. Despite his repeated vows to "shut down the virus," the number of deaths under his watch has surpassed those under Trump, despite the prevalence of vaccinations that did not exist under the former president.

Vice President Kamala Harris echoed Biden multiple times on her Twitter account in the weeks after the 2020 election, saying she and Biden would "get this virus under control."

Biden has also reversed his position on vaccine mandates. When he was still president-elect, he told reporters that he didn’t believe the COVID-19 vaccine should be mandatory and that he "would not demand that it be mandatory." Psaki reiterated during a July press conference that it is "not the role of the federal government" to mandate the vaccine.

Biden reneged on that promise in September amid a new wave of cases due to the delta variant, announcing a six-part plan to slow the spread, including vaccine mandates for federal workers, government contractors and private businesses with 100 or more employees.

The Biden administration has also been fiercely criticized on both sides of the aisle over footage of people waiting in long lines for hours to obtain a COVID-19 test ahead of the busy holiday travel season. Biden had promised to fix the testing issues faced by the previous administration, signing an executive order upon his inauguration appointing a COVID-19 response coordinator to handle the distribution of tests.

Biden acknowledged this week that his efforts had fallen short, and he has since promised to make 500 million coronavirus tests available free of charge, but the administration has not yet signed a contract to buy the tests and has not said when the tests will be delivered.

The president also took a dramatically different tone when he said Monday that "there is no federal solution" to the pandemic and that it was up to governors — a sentiment that was much maligned by Biden and the Democrats under the Trump administration.

Biden speaks with reporters on the South Lawn before departing from the White House on Marine One on Dec. 27, 2021, in Washington. (Anna Moneymaker/Getty Images)

Biden has also failed to follow through on his promise to hold China accountable for its handling of the virus that causes COVID-19. During his campaign, Biden said he would "not be taking China’s word for it" and would "insist" that the communist country cooperate with a U.S. investigation into its origins. Since taking office, Biden has had three speaking engagements with Chinese President Xi Jinping and has not raised the issue once.

A much-anticipated U.S. intelligence community’s review of the virus’ origins in August said it’s possible the virus leaked from the Wuhan Institute of Virology, but it failed to reach any definite conclusions. Biden issued a strongly worded statement on Aug. 27 after the review concluded, saying he "will not rest" until the world gets answers, but he has not mentioned the issue publicly since.

Meanwhile, Trump blasted Biden as "bowing down to China" and being complicit in the "coverup" in his year-end newsletter to supporters on Tuesday.