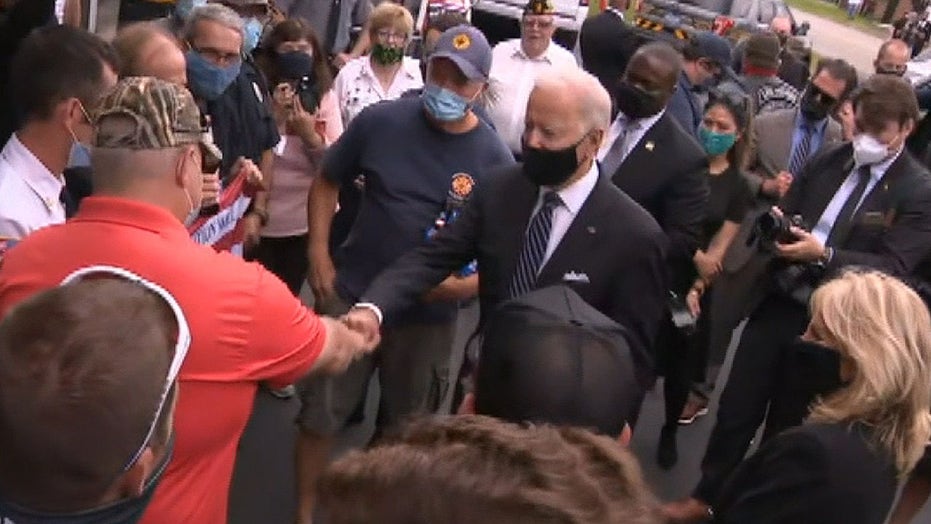 Joe Biden wants people to know that he makes good on his promises when it comes to beer.

After placing a wreath at the Flight 93 Memorial in Shanksville, Pa., and meeting with families of the 40 victims of the United Airlines flight that was one of four hijacked during the 9/11 terrorist attacks, the Democratic presidential nominee and his wife, Jill Biden, on Friday afternoon stopped at the nearby Shanksville volunteer fire department.

The Bidens brought some sweets, including a cake that Jill Biden held. After viewing a large wooden cross draped with an American flag, they met with dozens of firefighters and their families.

After a man said he heard Biden was bringing beer -- something the former vice president had promised during a previous visit -- Biden went back to his SUV and retrieved six packs of Bud Light and Iron City Beer.

“I keep my promises!” Biden said.

Democratic presidential candidate and former Vice President Joe Biden delivers beer as he and his wife Jill Biden visit the Shanksville Volunteer Fire Department in Shanksville, Pa., Friday, Sept. 11, 2020. The Bidens stopped by after visiting the nearby Flight 93 National Memorial to commemorate the 19th anniversary of the Sept. 11 terrorist attacks. (AP Photo/Patrick Semansky)

Before departing the memorial, a man wearing a “Back the Blue” T-shirt in support of law enforcement was spotted by Biden.

“Back the blue, huh?” Biden said according to a pool report.

“Back the blue. Yes sir. I hope you do too,” the man responded.

Biden didn’t appear to specifically respond before thanking everybody.

Amid a summer of protests and unrest over cases of police brutality and racial inequity, President Trump and his campaign have repeatedly claimed Biden of supporting calls by some on the left to defund police departments. Biden has repeatedly clarified that he doesn’t support such calls and has accused the president of supporting legislation that would reduce spending for law enforcement.

BIDEN AND PENCE MEET AT 9/11 REMEMBRANCE AT GROUND ZERO

The stops in Shanksville followed a visit to the annual 9/11 memorial service at Ground Zero in New York City, at the site where more than 2,600 people died on Sept. 11, 2001, when two airliners hijacked by Al Qaeda terrorists slammed into the World Trade Center, collapsing the Twin Towers.

As the traditional reading of the names of those killed when the Twin Towers collapsed got underway, Biden and Vice President Mike Pence stood just a few feet apart.

The two briefly chatted and tapped elbows -- a common replacement for shaking hands amid the coronavirus pandemic.

During the New York City ceremony, Biden briefly comforted an elderly woman who sitting nearby using a wheelchair.

The woman -- who was holding a picture of her son -- told Biden her son was 43 when he died in the attacks. Biden, who momentarily took the image and looked it over, according to a pool report, reflected on the loss of his own son Beau, who died in 2015.

“It never goes away,” Biden said.

“It’s a solemn day. That’s how we’re going to keep it,” he said, before adding that he’ll “get back to the campaign tomorrow.”