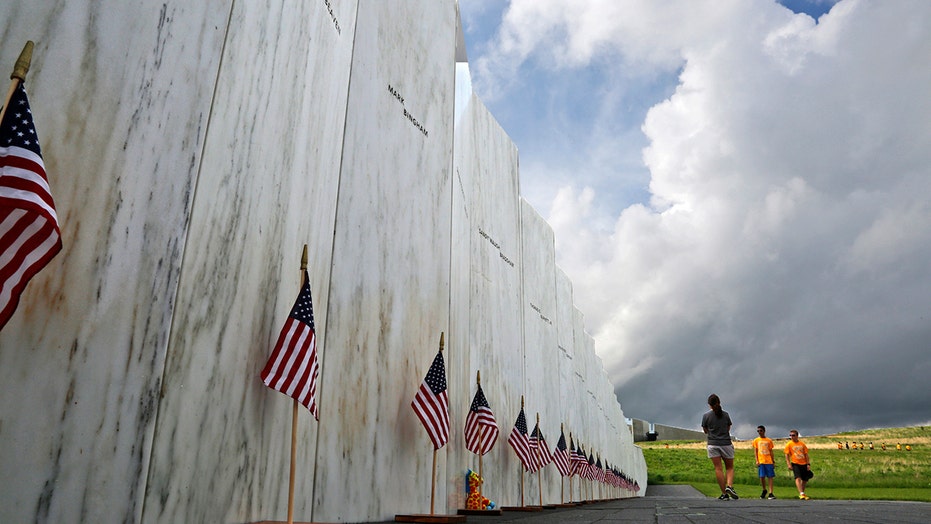 President Trump paid “tribute to the sacrifice” of nearly 3,000 Americans who lost their lives on September 11 and honored the "extraordinary sacrifice" of first responders on that fateful day 19 years ago.

During a solemn ceremony in Shanksville, Pa., the president delivered an address focused on unity and dedicated to the 40 passengers and crew members of Flight 93 who lost their lives 19 years ago, saying "nothing could have prepared them for that dreadful morning."

The president said the passengers "did not hesitate" and "did not waver," saying the "40 towering patriots took charge and changed the course of history forever."

“To the family members of Flight 93: Today every heartbeat in America is wedded to yours. Your pain and anguish is the shared grief of our whole nation,” the president said. “The memory of your treasured loved ones will inspire America for all time to come.”

The 40 passengers and crew members of Flight 93 are believed to have prevented a larger attack by fighting back against the terrorists who hijacked the plane. The field in Shanksville, where the plane crashed, is just a 20-minute flight from the U.S. Capitol.

“Every passenger and crew member on that plane had a life filled with love and joy, friends and family, radiant hopes and limitless dreams,” the president said. “When the plane was hijacked, they called their families and learned that America was under attack. Now, they faced the most fateful moment of their lives.”

“Through the heartache and tears, they prayed to God, they placed their last calls home, they whispered the immortal words, ‘I love you,’” the president said. “Today, those words ring out across these sacred grounds and they shine down on us from heaven above.”

“When terrorists raced to destroy the seat of our democracy, the 40 of Flight 93 did the most American things: They took a vote, and then they acted,” the president continued. “Together, they charged the cockpit, they confronted pure evil, and in their last act on this earth, they saved our capital.”

The president said that those 40 passengers “died as heroes.”

“Their momentous deeds will outlive us all,” the president said.

The president then shifted to “every 9/11 family all across this nation,” saying that he and first lady Melania Trump “come to this hallowed ground deeply aware that we cannot fill the voice in your heart or erase the terrible sorrows of this day.” “The agony renewed, the nightmare relived, the wounds reopened, the last treasured words played over and over again in your minds,” Trump said. “But while we cannot erase your pain, we can help to shoulder your burden.”

He added: “We promise you the unwavering love, support and devotion of all Americans.”

On the 19th anniversary of the 9/11 attacks, the president reminded Americans that “we were united by our conviction that America was the world’s most exceptional country, blessed with the most incredible heroes, and that this was a land worth defending with our very last breath.”

“It was a unity based on love for our families, care for our neighbors, loyalty to our fellow citizens, pride in our flag, gratitude for our police and first responders, faith in God — and a refusal to bend our will to the depraved forces of violence, intimidation, oppression and evil,” the president said.

He added: "The song 'God Bless America' became a rallying cry for the nation."

“Today, we honor their extraordinary sacrifice, and every first responder who keeps America safe,” he said.

Trump then expressed his “undying loyalty” to the “nearly 6 million young men and women who have enlisted in the United States Armed Forces since September 11th, 2001.”

“More than 7,000 military heroes have laid down their lives since 9/11 to preserve our freedom,” the president said. “No words can express the summit of their glory or the infinite depth of our gratitude. But we will strive every single day to repay our immeasurable debt and prove worthy of their supreme sacrifice.”

The president then touted the U.S. military's efforts in taking out the ISIS caliphate and for ending "the brutal reign of the Iranian butcher who murdered thousands of Americans," Qassem Soleimani.

Trump's speech was delivered near the Shanksville memorial, which was created in 2018. The memorial is called "The Tower of Voices," which stands 93 feet tall. The tower holds 40 wind chimes to honor the 40 victims of Flight 93.

Meanwhile, Vice President Mike Pence was in New York City Friday to commemorate the 19th anniversary of the 9/11 attacks, at the Tunnel to Towers Foundation event in Zuccotti Park in downtown Manhattan.

Pence spoke “in the memory of all those we lost on this day 19 years ago” and “in memory of the heroes that were forged that day…And heroes forged on battlefields ever since.”

Tunnel to Towers is a nonprofit organization that started supporting Gold Star families through $11 minimum donations from people around the country.