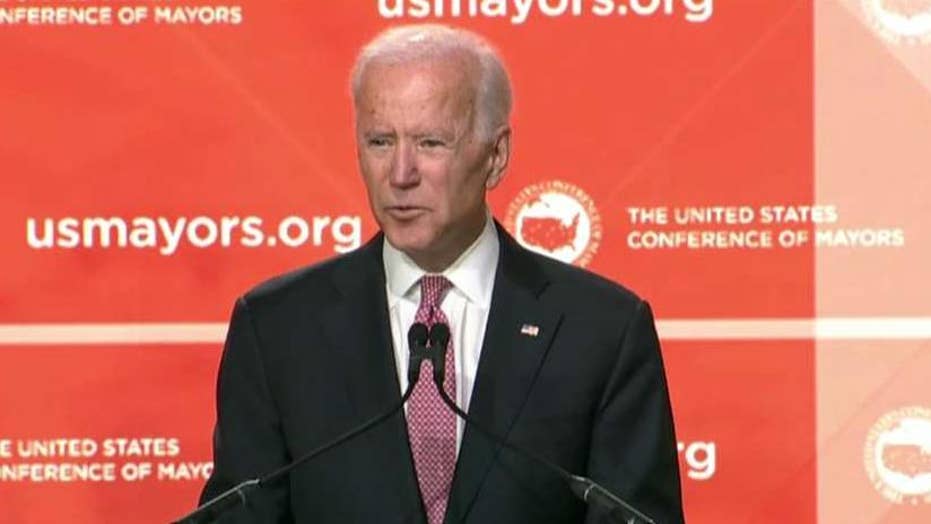 Biden pushes back amid evidence of inaccurate war story

While the campaign still calls Iowa "critical" and the candidate himself says it holds the "key to the kingdom," a senior Biden official said the former vice president’s campaign is already ramping up efforts in the Super Tuesday states that vote at the beginning of March and beyond.

Asked specifically about the Iowa caucuses, the campaign official stressed, “I think we'll win,” but added, “do I think it's a must-win? No.”

The comments came Tuesday as the campaign held a background briefing with political reporters.

The official acknowledged that “we know it's going to be a dog fight there. The same thing is true in New Hampshire,” which votes second in the nominating calendar and holds the first primary in the race for the White House.

But in a possible move to lower expectations in New Hampshire, the Biden campaign pointed to the “incredible … home-field advantage for a Massachusetts candidate or a New Englander for that matter.”

Sens. Bernie Sanders of Vermont and Elizabeth Warren of Massachusetts, who are battling for second place behind Biden in the most recent 2020 Democratic nomination polls, hail from states that border New Hampshire.

The campaign also said they think there are “probably three or four” other candidates in the record-setting field of roughly 20 Democratic presidential contenders “that are going to go awhile.”

Biden’s held the front-runner status in the primary race since even before he declared his candidacy in late April.

Senior officials highlighted the strength of their campaign teams in Iowa, New Hampshire and the two other early voting states – Nevada and South Carolina – saying they’re “pleased with the caliber and quality of staff we've gotten obviously at the HQ level, but in particular in the early states.”

They touted their “very solid footing” in those crucial states and added that “we are now ramping up, not just for Super Tuesday, but Super Tuesday and beyond.”

As of now, 15 states are scheduled to hold primaries or caucuses on March 3, 2020. Among the Super Tuesday states are the two most populous in the nation: California and Texas.

The campaign also spotlighted their efforts to build a “diverse coalition,” saying Biden’s “putting together a diverse coalition that stretches … more broadly than other candidates in this race so far have shown they've been able to do.”

They emphasized their candidate’s electability, noting that “all of the available evidence is [primary voters] believe that Biden is the person who is best positioned to beat Trump and the strongest candidate to beat Trump. And that is a huge asset to have in this race.”

And they downplayed Biden’s spate of gaffes the past couple of months – which have grabbed plenty of media attention. A senior official said voters aren’t consumed with the gaffes “because they believe, they know him. They've seen him as a national figure for a decade or so as vice president.”