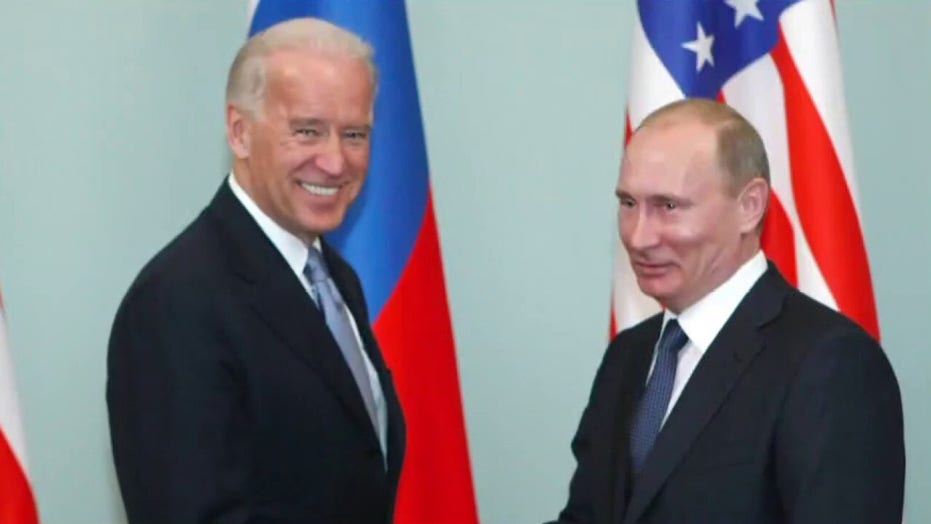 President Biden told Ukrainian President Volodymyr Zelensky on Monday that he will "stand up firmly" for Ukraine’s sovereignty during his meeting with Russian President Vladimir Putin next week, while extending an invitation to the White House later this summer.

White House national security adviser Jake Sullivan told reporters that President Biden had a call with Zelensky Monday afternoon and the two leaders were able to "talk at some length."

BIDEN TO RAISE RUSSIA-BASED RANSOMWARE ATTACKS IN MEETING WITH PUTIN

Sullivan said the call was one Biden had "been planning to make" in advance of his trip to Europe this week for the G-7 and NATO summits, and before his meeting in Geneva on June 16 with Putin.

"President Biden told President Zelensky that he will stand up firmly for Ukraine’s sovereignty, territorial integrity and its aspirations as we go forward," Sullivan said.

Sullivan added that the president told Zelensky "he looks forward to welcoming him to the White House this summer after he returns from Europe."

Ukrainian comedian and presidential candidate Volodymyr Zelenski speaks to his supporters at his headquarters after the second round of presidential elections in Kiev, Ukraine, Sunday, April 21, 2019.  (AP Photo/Vadim Ghirda)

But Sullivan went on to defend Biden’s set meeting with Putin, saying that there is "no substitute for face-to-face engagement."

"Meeting face-to-face is not just something you do with Vladimir Putin," Sullivan said, noting the president will meet with "35, 36" leaders on this trip.

In terms of timing of the Biden-Putin summit, Sullivan said it is "hard" to "find a better context" for a meeting with the Russian president, after Biden will have spent time with allies from democracies around the world.

Sullivan said that Putin will be able to "understand fully where the U.S. stands, and what we intend to do."

"We believe, fundamentally, that our capacity to ensure that harmful and disruptive activities against the United States do not continue unabated is to be able to communicate clearly, directly, not by negotiating in public, but by explicating our position and our capabilities in private," Sullivan said.

Sullivan added that the Biden administration has already dealt with a range of issues with Russia, including their move in imposing "costs for election interference and solar winds," and the "range of issues in the cyber and ransomware domain."

"It is an effective and appropriate context and time period to have this summit," Sullivan said.

Biden is also expected to raise the issue of Russia-based ransomware attacks with Putin during their summit, as the U.S. has dealt with a number of ransomware assaults in recent weeks.

The latest ransomware assault last week shut down the U.S.-based meat plants of the world’s largest meatpacker, Brazil-based JBS. The White House said the hack was likely carried out by a criminal group based in Russia. That attack came just weeks after the largest U.S. fuel pipeline, the East Coast's Colonial pipeline, was targeted by a criminal group originating in Russia.

The Biden administration declined to condemn Putin after the Colonial pipeline attack and stressed that the U.S. did not believe Russia's government was involved. However, shifting tone, the White House later said Putin and the government have "a role to play in stopping and preventing these attacks."

But Sullivan told reporters Monday that ransomware is a "national security priority," specifically related to critical infrastructure in the U.S., and maintained that the president will "treat it as such in the G-7 and on every stop along the way" on his trip.

Meanwhile, Sullivan said Monday the president is going on his trip to Europe "from a position of strength," and with the intent to "show the rest of the world what America is capable of."

"We will show that the U.S. retains the profound capacity to help rally the world’s democracies to solve big problems," Sullivan said.