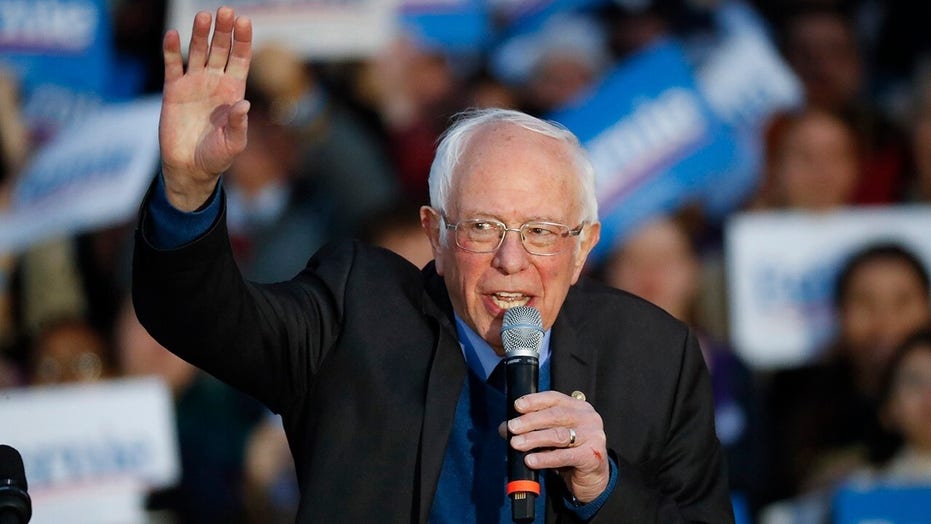 Sanders rallies supporters in Michigan ahead of crucial primaries

Six states with a total of 352 delegates up for grabs; Mark Meredith reports.

Bernie Sanders’ newest senior adviser has a history of incendiary comments that include placing blame on America for 9/11, disparaging Michelle Obama's appearance, and even describing the Obama administration's Usama bin Laden takedown as "choreography."

Sanders, I-Vt., over the weekend announced that Phillip Agnew, an artist and organizer, officially would be brought onto his Democratic presidential campaign. Agnew previously served the campaign as a national surrogate.

“I am excited to welcome Phillip to our team,” Sanders, who is fighting to rebound after Super Tuesday losses to former Vice President Joe Biden, said in a statement Saturday. “He is a gifted organizer and one of his generation’s most critical voices on issues of race and inequity. He has and will continue to push me and this movement to deliver on what is owed to Black people who have yet to experience reciprocity in this country.”

Agnew tweeted the announcement, saying: “i’ve joined the campaign as a senior advisor; accepting the challenges & contradictions to my friends & comrades: thank you for the love & accountability. this is a people's position on a people's campaign.  We will leave no one behind.  That is our promise. @BernieSanders"

Agnew, though, has a history of controversial posts on social media.

“Random thought while standing in Gas Station: Michelle Obama is an odd looking woman…I’d call her ugly but I don’t want the backlash…” he tweeted on Oct. 22, 2009.

Agnew tweeted, again, on Dec. 10, 2009, saying: “Michelle Obama is just not pretty…I’ve tried to look at her from every angle possible.”

Agnew, on Sunday, put out a statement apologizing for his tweets.

“I am not my tweets from 2009. Still, words have power to heel & to harm and I acknowledge and apologize for when my words harm,” he tweeted. “I’ve spent years speaking life and love into my community but I was wrong and I have to be accountable.”

Agnew shared a full statement saying he was “sorry for the remarks he made” when he was 23.

“I typed them as a young, immature, and insecure boy who thought he was forever invisible and ‘invincible.’ My comments were shallow, careless, sexist, and cruel,” he said. “I grew up socialized by false standards of beauty and success. And young, dumb Phillip spouted all manner of things that today I absolutely reject and regret.”

He added: “Thank you for holding me accountable.”

Agnew’s statement focused on his past remarks about Michelle Obama but didn’t acknowledge other controversial posts on Twitter and Instagram over the years — about the terrorist attacks of Sept. 11, 2001 and more.

“Tomorrow America remembers the day that she turned on herself, dismantled her constitution, and killed her own citizens in the name of money,” Agnew tweeted on Sept. 10, 2010.

Then there was this one on May 2, 2011, the day U.S. Navy SEALs killed Usama bin Laden in Pakistan: “I don’t believe sh*t America, and by default Obama, says. Sorry. We prolly BEEN killed Osama. All choreography. Got no proof; gut feeling.”

And on Sept. 11, 2016, Agnew shared a cartoon of the burning World Trade Center and two boomerang-shaped planes in each tower, with “U.S. Interventionist Policy” imprinted on each.

His caption read: “#neverforget what goes round comes round.”

Then on June 13, 2016, after the Pulse Nightclub mass shooting in Orlando, Fla., Agnew tweeted that “america is hate-founded, hate-legislated, hate-sponsored, hate-endorsed, hate-filled. This country created this.”

Amid a backlash over that tweet, Agnew clarified that he was “not blaming the victims here,” but that “when I say country I mean the people in power/policy, the government.”

“Just clarifying who to blame,” he said. “it isn’t radical islam and it wasn’t those people in the club. It is us. We spread this hate.”

“international issues can be confusing for some,” he tweeted on Feb. 25, 2019. “a good rule of thumb: if the US is sending ‘humanitarian’ aid…it’s a PR cover for inhumane bullsh*t. If the US has chosen a side…it’s the wrong one. If the US is PUSHING the story…it’s a lie.”

The Sanders campaign and Agnew did not immediately respond to Fox News' requests for comment for this report.