Supreme Court Justice Amy Coney Barrett, exactly two weeks into her new job, is on Tuesday hearing the Affordable Care Act (ACA) case that Democrats hammered her over throughout her confirmation hearings and has the potential to overturn the law that is former President Obama's signature legislative achievement.

The newly minted justice and the rest of the court are participating in remote oral arguments via teleconference that are streamed live online.

Barrett's questioning in the case, which is formally called California v. Texas, and where she comes down in the eventual ruling handed down by the court, will be closely watched by partisans on both sides -- by Republicans who hope she will cement a 6-3 GOP-appointed majority that will interpret laws consistent with how they see them and by Democrats who fear that she will be a partisan who strikes down left-leaning laws and upholds those favored by conservatives.

"A vote by any senator for Judge Barrett is a vote to rip away health care from millions of Americans," Senate Minority Leader Chuck Schumer, D-N.Y., said repeatedly through Barrett's confirmation process.

President Donald Trump watches as Supreme Court Justice Clarence Thomas administers the Constitutional Oath to Amy Coney Barrett on the South Lawn of the White House in Washington, Monday, Oct. 26, 2020, after Barrett was confirmed by the Senate earlier in the evening. (AP Photo/Patrick Semansky)

"It would be catastrophic for the 20-plus million Americans who obtained health care coverage under the ACA and the 100 million-plus Americans who would lose the law’s protections for people living with pre-existing conditions," Sen. Mazie Hirono, D-Hawaii, said, warning that Barrett could be the reason protections provided by the law also known as ObamaCare are lost. "When my Democratic colleagues and I pressed her about how she would take the real-world impact of millions of people losing access to health care into account, she said those are 'policy consequences' for Congress to address."

Meanwhile, Barrett and her GOP supporters said that her record as a federal judge and an academic makes her intellectually suited to the task of being a Supreme Court justice and that her independence had been on display as a member of the 7th Circuit Court of Appeals.

"Judge Amy Coney Barrett is one of the most highly qualified people to ever be nominated to be an Associate Justice of the Supreme Court. She will faithfully apply the law to the facts without personal agenda and fully understands the difference between an impartial judge and a political activist," said Senate Judiciary Committee Chairman Lindsey Graham, R-S.C.

Added Senate Majority Leader Mitch McConnell, R-Ky.: "She has pledged to ‘apply the law as written, not as she wishes it were.’ Her testimony, her writings, and her reputation confirm a total commitment to impartiality ... She earned the highest rating from the left-leaning American Bar Association. They marveled at the, quote, ‘breadth, diversity, and strength of the positive feedback [they] received from judges and lawyers of all political persuasions." 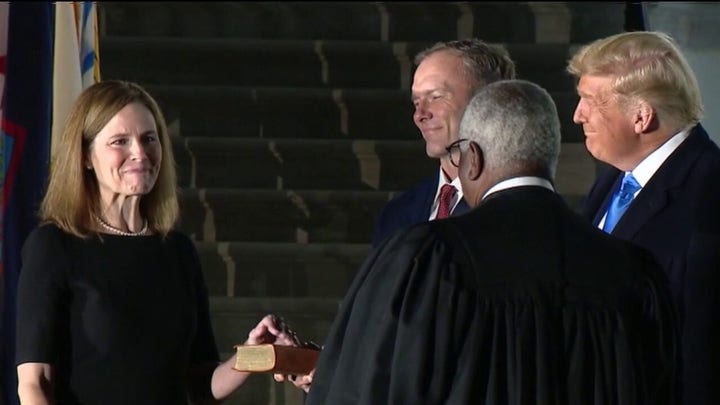 California v. Texas was originally brought by a group of red states, led by Texas, against the Affordable Care Act (ACA) with the goal of invalidating the law because, they argue, it is unconstitutional now that there is no financial penalty associated with the individual mandate to buy health insurance.

In one of the two earlier constitutional challenges to the ACA, Cheif Justice John Roberts sided with the Democrat-appointed bloc of justices to uphold the ACA 5-4 on the grounds that the individual mandate could be read as a constitutional trigger for a tax rather than an unconstitutional fine punishing Americans for not purchasing a certain product. This upset Republicans at the time and many on the right are still unhappy about the decision.

But a Republican Congress and President Trump eliminated the financial penalty for not buying health insurance while leaving in place the mandate itself. This, the Republican states say, makes it impossible to read the provision as a tax any longer and should lead to the ACA being overturned.

The government, the red states argue in a brief, cannot force people to buy insurance "any more than it can order them to buy a new car or broccoli."

Although the enforcement is gone from the individual mandate, the requirement in the law that people buy health insurance remains, they say, and should be the reason why the ACA falls.

The blue states, led by California, which stepped in to defend the ACA in court because the Trump administration has chosen to argue against it, say that the individual mandate as it stands now is constitutional.

But the two sides' arguments on this point are unlikely to be the focus of the hearing Tuesday. The center of discussion is likely to be the doctrine of "severability," or whether the rest of the ACA can stand without the individual mandate. Barrett, in her confirmation hearing, described severability as a "Jenga game."

"So if you picture severability being like a Jenga game, it's kind of if you pull one out ... will it all stand or if you pull two out will it still stand?" the then-nominee said in response to a question from Judiciary Committee Ranking Member Dianne Feinstein, D-Calif.

She was pressed on why this ACA case would be different from a previous one she opined on in an academic article while still a Notre Dame professor. Barrett said it is distinguishable because Congress has since changed the law and that there is only one potentially unconstitutional provision at issue in this case, meaning only one "Jenga" block could potentially be pulled from the law here, versus two provisions that were at issue before.

Barrett added: "I think the doctrine of severability as it's been described by the court serves a valuable function of trying not to undo your work when you wouldn't want a court to undo your work. Severability strives to look at a statute as a whole and say 'would Congress have considered this provision so vital that kind of in the Jenga game, pulling it out, Congress wouldn't want the statute anymore?"

The lawyers arguing on behalf of California and the blue states -- as well as the Democrat-controlled House of Representatives, which stepped in to defend the ACA as well -- are likely to seize on this part of Barrett's analysis, that severability is meant to preserve laws Congress wouldn't want overturned, in their argument Tuesday.

"The [Tax Cuts and Jobs Act] reduced to zero the amount of the alternative tax imposed by [the individual mandate]. That amendment 'declawed the coverage requirement without repealing any other part of the ACA,'" a brief for the blue states reads. "In other words, the statutory scheme currently in effect—which was adopted by both Houses of Congress and signed into law by the President—makes the minimum coverage provision effectively unenforceable while preserving the rest of the ACA."

The blue states add: "The statutory text thus gives us 'unusual insight into Congress’s thinking...' It manifests 'Congress’ intent that' the balance of the ACA 'should survive in the absence' of an enforceable minimum coverage provision."

The Trump administration, which is present at arguments Tuesday, disputes this.

"The individual mandate cannot be severed from the remainder of the ACA," it said in a brief filed earlier this year. "Congressional findings incorporated into the ACA’s text clearly indicate that Congress would not have adopted the guaranteed-issue and community-rating provisions absent the individual mandate’s requirement to purchase insurance."

There is likely to be a decision in California v. Texas by summer 2021, which is the end of the Supreme Court's current term. It is possible a ruling could be issued much earlier, as the case is being argued early in the term. But rulings in blockbuster cases like this one are often issued near the end of a term as justices dedicate significant amounts of time to crafting opinions and honing arguments for both the majority and the dissent.

But with a new president incoming and a Senate that still could be controlled by Democrats next year if they sweep the two January run-offs in Georgia, any decision in the case could be rendered moot in the case that Congress reinstalls the financial penalty associated with the individual mandate or takes any other actions to change the ACA.

More than the implication for the ACA as a law, however, Tuesday's hearing and the eventual result of California v. Texas will likely be taken as a bellwether for what the new 6-3 Republican-appointed majority of the Supreme Court may look like and how independent Barrett will be of the president who appointed her.