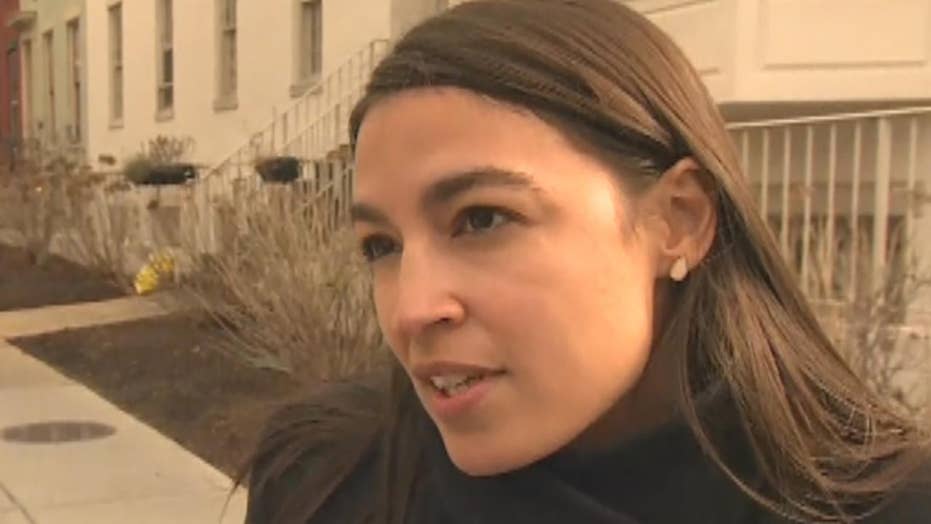 Ocasio-Cortez: I don’t think the blacklisting of progressive organizations is fair

Democratic congresswoman Alexandria Ocasio-Cortez speaks on fundraising and feelings towards the Democratic Party.

Rep. Alexandria Ocasio-Cortez has again ruffled the feathers of fellow Democrat lawmakers by endorsing the challenger of her colleague Rep. Eliot Engel in his tough primary race in New York.

Her endorsement of Bronx middle school principal Jamaal Bowman is her latest effort to buck Democratic Party bosses in favor of bringing in a new generation of progressive candidates to Congress.

This endorsement hits home, as Engel represents the Bronx district just north of hers.

“Once again, she has abandoned her colleagues in Congress and supported an outsider," grumbled one Democratic source. "Sadly, the people she supports often lose. That might be different here, but it has little to do with her. She came in in the ninth inning.”

Engel, 73, was already in a tough race prior to Ocasio-Cortez inserting her influence into the election. The powerful chairman of the House Foreign Affairs Committee carries a lot of clout in Washington, but he recently made two missteps that didn't go over well at home in New York City.

He took heat for holing up in his Maryland home outside of Washington, D.C., while the coronavirus ravaged New York City. And this week, he was caught on a hot mic asking for time to speak at an event just because of his upcoming June 23 primary.

“If I didn't have a primary, I wouldn’t care,” Engel was heard saying at an event to address unrest and vandalism in the wake of George Floyd's death.

But one Democratic aide said Ocasio-Cortez’s involvement in the Engel race doesn’t appear to have garnered the level of anger as earlier progressive attempts to oust incumbents of color, either led by Ocasio-Cortez or the AOC-aligned group Justice Democrats. Engel is hurting and Bowman is a credible candidate in the predominantly black and Hispanic district that covers parts of the Bronx and Westchester County.

“I think she's coming into this race because she kind of smelled blood in the water,” the Democrat source told Fox News, citing the Engel hot mic moment that concerned fellow Dems.

The Democratic aide viewed AOC’s late endorsement as a shrewd political move to potentially take credit for a Bowman win and further bolster her chances to play kingmaker.

It was once unheard of for a sitting member of Congress to endorse a primary challenger to a colleague, but AOC has changed the rules and proven she came to Washington to buck tradition, not always play nice and to color outside the lines, the aide said.

Members now respect AOC for her clout and “a good number would be concerned or fearful that she would interject themselves in their race,” the aide said.

Hank Sheinkopf, a longtime New York political consultant who worked on Engel's early races in Congress, said Engel was already in trouble given the changing demographics of his district, his longevity in Congress and recent gaffes.

Ocasio-Cortez inserting herself at the tail end of the race means she can claim a victory if Bowman joins her in Congress.

“It will have an impact because she stands for change," Sheinkopf said of the endorsement. "In that district, it may have more resonance. And the fact that Congressman Engel got caught in two situations which are damaging."

Ocasio-Cortez, 30, surprised the nation when she pulled off an upset primary win two years ago by beating New York Rep. Joe Crowley, who was thought to be a future House speaker.

Since then she's tried to stay true to her activist roots by protesting paying dues to Democratic Congressional Campaign Committee, the campaign arm that protects House Democrat incumbents, and by setting up her own fundraising operation to elect progressive candidates -- even if means picking off establishment figures like Engel.

Her anti-establishment moves have rankled Democrats in Washington and in New York who accuse her of trying to purify the party.

"They're not used to it," Sheinkopf said. "If there's anything to be said about New York Democrats is that they fail to understand Political Science 101, which is that when you have one party in control you tend to have factionalism.

"These establishment figures were, in many cases, the Democratic reformers of 40 years ago," Sheinkopf continued. "They are now challenged by the very thing that brought them to power, which is someone who is saying 'I want to reform things'. [AOC] will ultimately become the new establishment, but it'll just take time.”

House Speaker Nancy Pelosi, who, like the DCCC, backs incumbent Democrats, made clear she supports both Ocasio-Cortez and Engel in their primary elections on June 23.

"I firmly support Eliot Engel for Congress and I support Alexandria for Congress as well," Pelosi said Thursday, noting Engel's unique clout as chairman of the Foreign Affairs Committee and as a senior member of the Energy and Commerce Committee.

"That wouldn't happen again," Pelosi said. "That's a lot of power ... He does a great job for New York."

Watson also provided a statement in which Engel explained his news conference remark by saying that “running for re-election, I thought it was important for people to know where I stand.”

The Congressional Black Caucus endorsed Engel, who is white, over Bowman, who is black, because Engel has a proven record of delivering for New York.

“Our membership knows that Eliot Engel will be there with his energy, his leadership and his vote, especially in these times of crisis,” said CBC Political Action Committee Chair Rep Gregory Meeks, D-N.Y., according to the Yonkers Tribune.  “Eliot is my colleague in the New York Delegation, he is the Dean of the New York Delegation, and I know first-hand how much he cares about our community. He’s a friend we can call on who delivers for New York, and he’s earned our endorsement because he shows up time and again.”

Ocasio-Cortez has already made a slate of endorsements in 2020 races with mixed reviews. On the unsuccessful side, she backed Bernie Sanders for president over Joe Biden during the primary. She endorsed Jessica Cisnero, a 27-year-old lawyer in Texas, who failed to defeat Rep. Henry Cuellar, a more conservative Democrat. And AOC-supported Cristina Tzintzún Ramirez, a progressive organizer, failed to secure the Democratic nomination to take on Sen. John Cornyn, R-Texas.

On the other hand, Ocasio-Cortez backed Marie Newman who beat Rep. Daniel Lipinski, an anti-abortion congressman from Illinois in the primary election this year. And on Tuesday, AOC-backed Teresa Leger Fernandez won the Democratic primary in New Mexico over former CIA officer Valerie Plame.

In choosing Bowman, Ocasio-Cortez said the longtime educator would be a "fantastic colleague."

"Jamaal has dedicated the last decade of his life serving his community as a school principal and community servant," Ocasio-Cortez tweeted.

Rep. Ro Khanna, a progressive Democrat who is often aligned with Ocasio-Cortez on the issues, is staying neutral in the Engel race, but respects Ocasio-Cortez's willingness to make waves.

"I have worked with Engel on Yemen and respect his leadership on that issue," Khanna, D-Calif., said. "That said, I have always believed in competitive primaries and appreciate AOC’s courage in marching to her own drumbeat in supporting candidates she believes align with her values."

He added: "We need more independence in DC, and she’s charting a path that will allow more newcomers to have a shot at public service. Her class is arguably one of the most talented we have had in Congress and younger and more diverse."

A spokesman for the DCCC said the House Democrats’ political arm looks forward to Engel “continuing to serve his community for years to come.”

The district is solidly Democratic, with the primary winner all but assured of being elected in November.