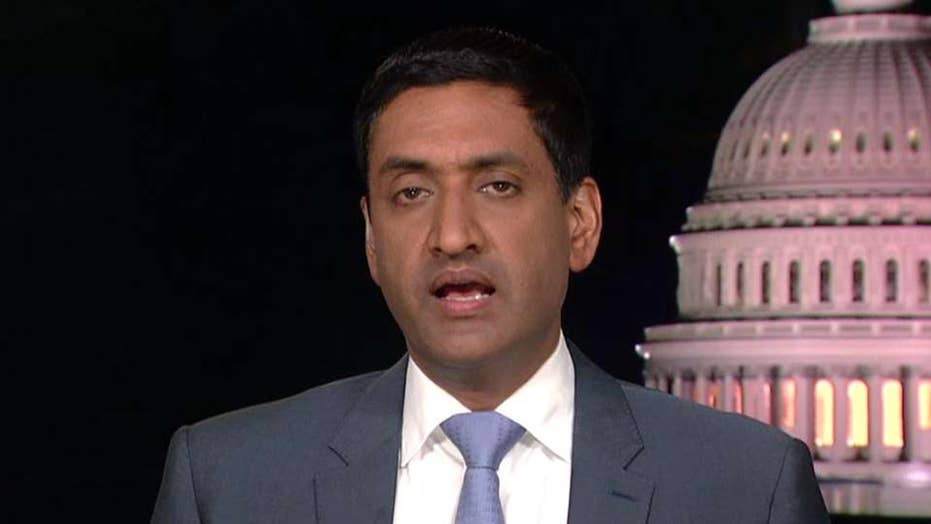 Rep. Khanna touches on his programs which are being put into place in order to keep tech jobs domestic.

Rep. Ro Khanna, who represents Silicon Valley, has been on a personal mission since entering Congress in 2017 to bring the tech success from his wealthy California district to Middle America.

Khanna, a progressive Democrat, has become an unlikely Silicon Valley ambassador to rural and minority communities in red-state America with an eye on creating regional tech hubs. He's traveled to a dozen communities, including Paintsville, Ky, and Beckley, W.Va., to support emerging tech programs and to study how the private sector and federal funds can enhance their efforts.

Leveraging his tech ties, Khanna worked with Gov. Kim Reynolds, R-Iowa, to launch in September the Forge, an Accenture-backed computer software technology hub to bring jobs and training to the rural community of Jefferson. He helped prod PeopleShores, a Silicon Valley-based tech services provider, to partner with Clarksdale, Miss., an African-American community, that in February launched a robotics process automation hub. And he's working with historically black colleges and universities in South Carolina to start remote student internships with the tech companies in his backyard.

Rep. Ro Khanna, D-Calif., with Iowa Gov. Kim Reynolds [far left] and others at the Grand Opening of the Forge in Iowa on Sept. 7, 2019.  (Jacob Fiscus Photography, courtesy of the Ro Khanna campaign.)

Though he's had success with individual projects, Khanna now is thinking big. He wants to jump-start regional innovation hubs across the country that will train for high-tech jobs, grow businesses and invigorate local economies. The goal is to end the brain drain where young professionals have to leave their communities for the coasts to find high-paying jobs.

"No person should be forced to leave their hometown to get a new economy job," Khanna said in an interview.

Khanna plans to introduce a massive $1 trillion investment plan in research and development that he's calling the 21st Century Jobs Act with the long-term goal of setting up technology hubs in every state. Khanna explained his big idea for innovation in a Q & A with Fox News.

Q: What is the 21st Century Jobs Act?

Khanna: The 21st Century Jobs Act basically says that America needs to have a massive investment in science and technology that is spread out across the country and work with our existing colleges and universities to create regional centers for job creation in the industries of the future.

The idea is that the concentration of technology jobs and innovation has been largely on the coasts and in certain large metropolitan cities. But many people have been left out and we see the stark divide now with COVID-19 where there's such a difference between those who can work remotely and those who don't have that opportunity and communities that don't have those jobs.

What this would do is say, look, there can be these clusters of innovation jobs in any part of the country. And it doesn't all have to be software setups. It could be around new processes for timber production, for tire manufacturing, some could be for health care. But what we do need is a massive investment in innovation and in the skills of innovation across this country so that people can live in the communities they grew up in.

People shouldn't have to move to do jobs. The jobs should be coming to their communities. No person should be forced to leave their hometown to get a new economy job.

Q: How do you get a tech hub in rural Nebraska, for example?

Khanna: In midsize cities, the idea would be to give research and development grants to the university there or the local colleges to have a research facility, [with] stakeholders of that local community determining what it is.

So in Youngstown, it can be advanced manufacturing, for example. And the idea is to first have a massive investment in the K through 12 system to get the science and technology curriculum that's needed. And a massive investment in credentialing and apprenticeships in the community college and in the educational sphere to get people skilled in it. And then some investment in terms of matching venture capital for entrepreneurs that may emerge there. The hope is that you can look in many of these midsize cities and have more success stories like Chattanooga or Columbus if you can fund the research and the educational infrastructure in these communities.

Q: How would money be doled out?

Khanna: The legislation calls for a federal investment board. Congress would appropriate the funding. We've said that we should have up to $1 trillion of funding for the science and technology investment [over 10 years]. That would be 1 percent of GDP [gross domestic product]. In the height of the Cold War, we were at 2 percent of GDP.

... The point is if we can bring technology and new jobs to these communities, I think we start to stitch America back together. People start to see that their kids are participating with people in other parts of the nation in a common economic project that's benefiting everyone. I think there'll be an embrace of greater diversity and embrace of different regions. And so that's why I think it's not just about the economics, but about what it means for bringing America back together.

Rep. Ro Khanna, D-Calif., speaking at the Grand Opening of the Forge in Iowa on Sept. 7, 2019.  (Jacob Fiscus Photography, courtesy of the Ro Khanna campaign.)

Q: Do you envision the federal grant application as a communitywide effort with, perhaps, the land grant university taking the lead with businesses, private entities and schools in the area?

Khanna: Exactly. ...The thing that differentiates, in my view, the successful efforts from not is local stakeholder buy-in. Every local community is different. There's not some one-size-fits-all rural solution. There's not a one-size-fits-all solution for underrepresented communities. You really need the buy-in of the local chambers of commerce, local business, local universities, the local mayors, the local elected officials. Communities that are really doing it comprehensively are the ones that are likely to succeed. Where you see just top-down efforts from the federal government or from Silicon Valley, they don't succeed.

...I don't think that we should be trying to replicate Silicon Valley everywhere. I think what we have to try to do is figure out what is the innovation potential in every place and what are the real credentialing skills we can give folks.

Q: What do you think is the main challenge to getting this passed?

Khanna: Funding. These things always come down to funding. ... The question is when is America going to make productive investments for long term economic growth? This is a productive investment. It's not going to show up right away. Some may. But you can't over-promise, sort of, shovel ready jobs. But it is going to, over the course of five to 10 years, prepare America to compete in the 21st century and create jobs in these communities.

This is what China's doing. They have five- to 10-year plans. They're building universities. They're building the economy. And the challenge of our system is we have two-year elections for members of Congress and four-year terms for presidents. This is probably a 10-year project. Why isn't this happening? It's because we have to be able to think beyond the short-termism to build America. Our great presidents have done that, whether it was FDR or Dwight Eisenhower or Lincoln with land grant [colleges]. There have been moments in our country where we've been able to do that. And I think that's what we need now.