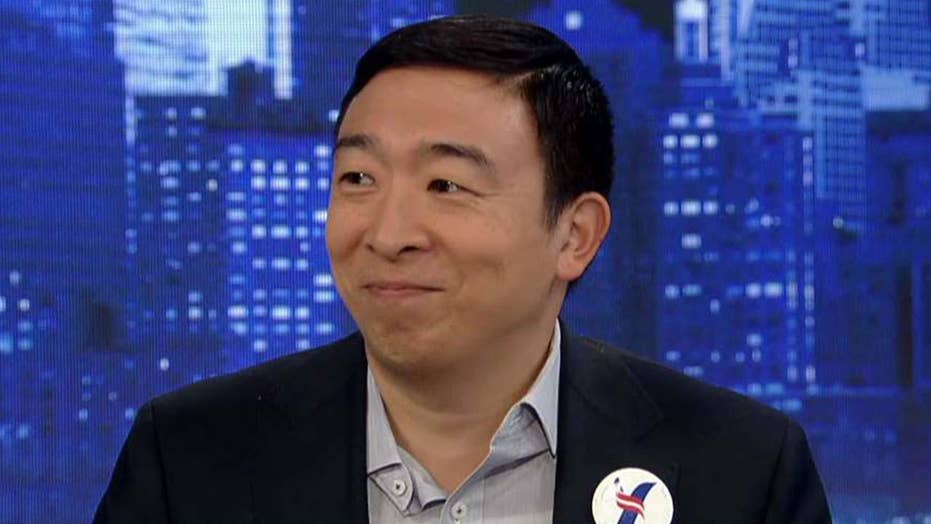 2020 Democratic hopeful Andrew Yang on his proposal to give $1,000 per month to Americans over the age of 18.

Democratic presidential candidate Andrew Yang told Fox News Thursday that he's "laser-focused on the problems that got Donald Trump elected in 2016," and thinks that his plan for a universal basic income will resonate with voters.

Yang's plan would put $1,000 into the pockets of every American over the age of 18, amounting in $2.4 trillion annually, money that would come from Amazon transactions, Google searches and robot truck miles, but he says that money would recycle into the economy through a "trickle up" effect.

Yang told Fox News' "The Story with Martha MacCallum" that he believes the $12,000 annual stipend will go "into car repairs and tutoring and food for kids and trips to the hardware store," and "would create over 2 million new jobs and grow the consumer economy by 10% to 12%."

"The money doesn't disappear and go anywhere," Yang said. "We have it and spend it and makes our families stronger and healthier."

Yang, a former ambassador of global entrepreneurship to President Barack Obama, insisted that a government handout will help make Americans healthier and happier, and equated job losses due to the booming tech industry with mental health issues and depression.

"If you look at our life expectancy, it's declined for the last three years because of surges in suicide and drug overdoses. A lot of that is happening in communities that have lost manufacturing jobs. So, if you project that happening to truckers in the next 10 years, there are 3.5 million Americans who drive a truck for a living right now. And if you think that they would take losing their livelihood very easily or gently then you probably live in a different country than I do," Yang said.

He cited a similar initiative in Alaska, where citizens have benefited from a petroleum dividend for about 40 years, a plan that remains popular throughout the state.

"Well, you know, they say the opposite of Donald Trump is an Asian man who likes math," Yang joked.

The 2020 contender also weighed in on the brewing abortion debate that came to a head on Wednesday when Alabama Gov. Kay Ivey signed a bill into effect that will make nearly all abortions in the state illegal and make performing one a felony, punishable by up to 99 years or life in prison unless the mother’s health is at risk, with no exceptions for women impregnated by rape or incest.

"I think it's a deeply personal decision that each woman has to undertake and to me, the government should not have a heavy hand saying what that choice should or should not be," Yang said. "I think that male legislators, in particular, should step back, let women decide what they want to do with their own reproductive rights and freedoms. I have a feeling I know how women would come out."